Most marketing automation systems start with known users. Some cutting-edge new systems can also nurture unknown prospects who visit your site but choose not to identify themselves. Few, however, focus on the very top of the funnel: buying signals in social media.

That’s exactly the key differentiator Vocus touts for its marketing automation system, which is almost unknown in the industry but already has more than 8,000 small and medium-sized business customers.

“We are actively searching Twitter for buying signals,” Vocus product manager Anil Yasyerli told me last week. “For example, if you’re an SEO agency … there are millions of people looking for SEO help. We find these conversations that are going on and then hand them over to our customers.” 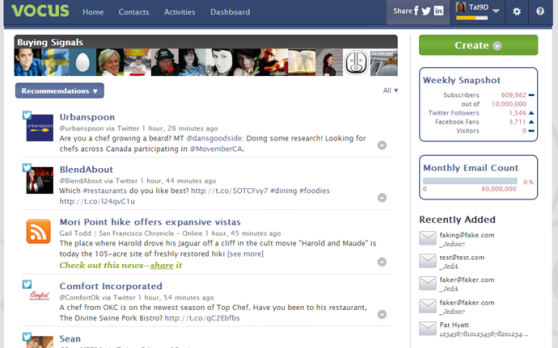 There’s a reason that almost no one knows that Vocus does marketing automation.

In spite of a claimed $28 million in marketing automation revenue in 2013 and a projected $40 million in 2014, the company started out as a government services agency in 1992, moved into PR in 1997, and only moved into the marketing automation space in 2011. Vocus already owned the popular PRweb press release site and the HARO (Help a Report Out) journalist service at the time, and entered the marketing technology space via acquisition of both an email marketing system and Engine 140, a Twitter social media marketing solution.

All of that complicated history means that one of the mid-sized marketing automation vendors by revenue isn’t well known in the space.

Now, however, it’s apparently time to make a change.

“We have stayed below the radar for a while, but we’re ready to make a big statement,” Yasyerli says.

Vocus’ claim to fame, its social media integration, works by using technology from the Engine 140 acquisition. The company licenses the Twitter firehose and looks for buying signals at all stages of the buying process.

We recently released the VB Marketing Automation Index,
based on reports from over 1,000 marketing pros.

Vocus finds 15 million of these signals each quarter, totaling up to 60 million a year, and it feeds those into prospect-nurturing campaigns for its marketing automation clients.

The company is also working on technology to do the same for other social media sites — although not Facebook, which unlike Twitter is a closed system — and for blogs, which it is already checking but has not yet integrated into the buying signals funnel. In essence, it is not just automating marketing but also automating lead generation.

“We were originally oriented to small business,” Yasyerli told me. “We added social media management and social media marketing, and then we started slowly moving up, checking the boxes, adding Salesforce.com integration, and going midmarket.”

The company may be trending that direction, but it’s still decidedly a small-company solution so far, without the depth and breadth — to say nothing of maturity — of features that a Hubspot or an Act-On, never mind a Marketo or Oracle Eloqua have. But later this year it’s adding integrations with Magento and SugarCRM ,and it will continue to add more features, Yasyerli said. With expected 2014 revenue of $40 million just in marketing automation, Yasyerli said the company is “one of the few largest marketing vendors out there.”

That might be a little optimistic, but it’s not crazy. There are almost certainly at least 10 vendors that make more than Vocus in marketing automation, but probably not 20.

The company may have more ammunition to acquire technologies and add features now as well. Just recently, on April 7, Vocus was acquired by private equity firm GTCR for an all-cash $446.5 million deal.

“We are very pleased to … partner with Vocus to help maximize its growth potential,” Mark Anderson, a GTCR Managing Director, said at the time. “Vocus has a demonstrated history of building innovative software and helping customers achieve success. We look forward to the opportunity to work with Vocus to enhance its industry leadership.”