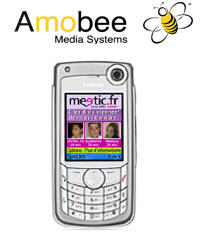 The move reflects how Vodafone and Telefonica are taking steps to defend themselves from players like Google and Yahoo, which also see the huge potential in the emerging mobile advertising market. Increasingly, ads are being used to deliver everything for free over the mobile phone, from games, movies, SMS services to other applications.

So far, most venture-backed start-ups, including Admob, Third Screen, have been building technology and ad networks for mobile content that is obtained by users “off-deck,” or for content that isn’t offered directly by the carriers.

But as carriers move to strike partnerships with publishers to offer content directly from the phones (without users having to navigate away using a Web browser), they’re looking for ways to bake ads into the content. Amobee is focused on doing just this, meshing its ad delivery software with a carrier’s customer management technology. For example, it will know where a customer might be physically located, what their preferences are — in order to serve more targeted, and thus lucrative ads.

Google and Yahoo have growing clout in this area, because they can bring advertisers to the table too. They’re delivering more sophisticated mobile location technology, and have unleashed a wave of mobile platform initiatives. Wireless operators feel threatened, especially by Google, which has been making noises about bidding on wireless spectrum in order to force more competition in the industry. Google and Yahoo are Amobee’s toughest competitors, says Bruce Golden, a partner at Accel, a venture firm that backs the company.

Amobee said that Vodafone and Telefonica will be recommending Amobee’s service to the various regional carriers they own and operate. However, Vodafone and Telefonica are working with other providers too. Just last week, for example, Vodafone said it selected another company, Rhythm New Media, to provide ads for video. Rhythm, of Mountain View, Calif., is backed by Lightspeed Venture Partners and others. Vodafone also uses Enpocket, another ad network company, bought by Nokia recently for a reported $150 million. AdInfuse and others also play in this market.

Aside from Accel Partners, Sequoia Capital and Globespan are previous investors in the two-year-old Amobee. They all participated in the most recent round, the amount of which was undisclosed. Amobee raised $5 million in 2005.

The company’s software supports digital ad delivery to all mobile content and communication types, including WAP and mobile web, mobile games, mobile video and mobile messaging. The company launched its first live consumer trial in March of 2006 and has now says it has several commercial operator launches including Vodafone in Greece, Czech Republic and Spain.
Vodafone, not well known here in the U.S., is actually the largest mobile phone company by revenue worldwide.

Industry forecaster Informa estimates the global mobile ad market will be worth $11.35 billion by 2011. According to Pyramid Research, by 2010, one billion new mobile subscribers will today’s 2.8 billion subscribers.