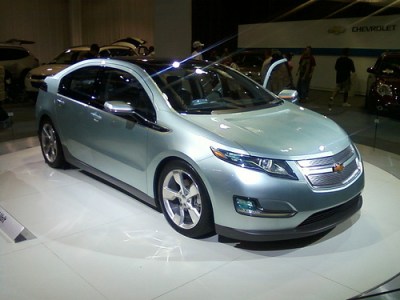 General Motors will deploy more Volt electric vehicles as demonstration models in a move to drum up publicity for the car — though it will further limit an already strained supply amid voracious demand for electric cars.

That means electric car buyers, who have so far provided tremendous demand for electric cars that has not been met, will face even more delays before they finally find themselves behind the wheel of an electric car. Most of the companies — and the U.S. government — have set very ambitious targets for electric car sales but have not been able to supply enough cars to every person interested in buying them. General Motors plans to use the demo vehicles to drum up publicity for the Volt — though the company might not need it in the short-term.

The price tags for electric cars haven’t been an issue either, because electric car buyers usually have higher incomes. Leaf owners are in the top 15 percent of households with regards to income, according to Nissan. Both Nissan and General Motors are trying to produce electric cars with broader appeal by slapping smaller price tags on them, but it’s resulted in demand that the car manufacturers just can’t keep up with.

Nissan, which manufactures the electric plug-in Leaf, also regularly faces hurdles in bringing the car over to the U.S. The company said it is on track to deliver 20,000 Nissan Leaf cars to people who have reserved them by September. So far, Nissan has only delivered around 500 Leafs to the United States. General Motors has also shipped around 1,500 Volt cars since the vehicle went on sale last year. GM expects to sell between 400 and 500 Volt cars in April, down from 608 in March.

The Chevy Volt basically has a traditional internal combustion engine and an engine powered by a batter jammed into the same vehicle. The car can run around 35 miles off battery power before the internal combustion engine kicks in, giving the car a total range north of 300 miles on a full charge and full tank of gas. It’s one of the cheaper electric cars on the market. The volt retails for around $40,000, compared to the super high-class Tesla Roadster that retails for more than $100,000.

The U.S. government has been very optimistic about the Volt’s potential — indicating that General Motors would sell more than 500,000 Volt vehicles by 2015. Those sales figures came from the government’s goal of having more than 1 million electric cars — that are plug-in hybrids or pure electric cars — on the road by 2015. The Nissan Leaf, an plug-in electric car that has a range of around 100 miles, will be the second best-selling car with 300,000 units sold by 2015, according to the report.