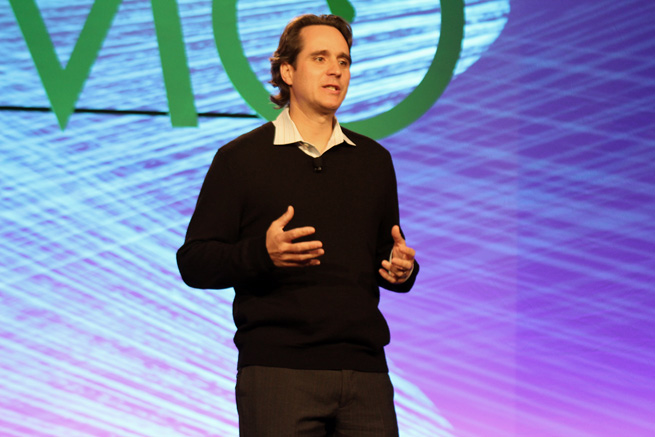 Conference calls tend to suck the life and soul out of an otherwise productive workday, and it’s not just the content. In fact, sometimes, we all have struggled to simply hear the content over a constant hiss of snaps, crackles, and pops.

Voxeet is a startup attempting to bring radical transformation to the infuriating space of conference calling. The company focuses first on crystal-clear conversations, where you always understand perfectly who is talking and what’s being said. It accomplishes this through an app — for Windows PCs and Android phones, for now, but later for iOS devices and Mac PCs. The app provides greater clarity through sophisticated audio processing, and also lets you manage your call and the people in it through an attractive visual interface.

The startup also wants you to be free to roam — yes, you don’t have to stay chained to your desk just because a call is running late. Voxeet allows you to transfer the call from your PC to your cell phone mid-conference with a single click and without sending any beeps or notifications to your colleagues.

And it offers audio that is fully duplex, meaning more than one person can talk at the same time without making the other people’s audio cut out. It’s even in stereo, so as you rearrange speakers’ avatars in the app to move them from left to right, their audio shifts from left to right, too.

Giraudie has had to deal with his share of bad conference calls. Originally from France, he found more and more of his professional life tied up in calls between colleagues in the U.S. and Europe. “Conference calls aren’t going away anytime soon,” he said, noting the cost-effectiveness and popularity of partially or fully remote workforces. But, he continued, “The quality and functionality of conference calls aren’t much different than they were ten years ago; we’re planning on changing that.”

First, Voxeet identified the three main problems with conference calls: Horrible sound quality, no easy way to identify speakers, and no mobility. Solving these problems, said Giraudie, “is not a simple technical task. We spent three years in stealth mode, with a team of top sound engineers designing and building a disruptive solution for each one of these, so that conference calls can finally be experienced as naturally as if you were around a table. We call this Natural Conferencing. This is a such a radical improvement to conference calls it’s hard to imagine going back.”

“It is a big market and companies spend a lot of money and it’s a terrible experience,” said Chuck Ganapathi, an entrepreneur in residence at Accel Capital. Ganapathi made his comments onstage at DEMO Spring 2012, in a panel discussion after Voxeet’s demonstration. “The technology sounds great, but I wonder how they perform on WiFi and 3G. But if they solve those problems the market is huge.”

Since its inception in 2009, Voxeet has received $300,000 worth of incubation from Innovantic and around $235,000 in loans and grants from French governmental entities. Currently, the Voxet app is available for Windows PCs and Android mobile devices; iOS and Mac support is coming soon.

For the startup’s roadmap, Giraudie revealed, “We’ll be producing an API to support our integration efforts with future development partners who will use Voxeet as an embedded technology in their own product. Also, we plan on developing Voxeet technology that will extend the same 3D Audio quality to conference room settings.”

Voxeet is one of 80 companies chosen by VentureBeat to launch at the DEMO Spring 2012 event taking place this week in Silicon Valley. After we make our selections, the chosen companies pay a fee to present. Our coverage of them remains objective.