With 5G networks rolling out, the telecom industry and its partners are trying to identify use cases that will justify the trillions of dollars they are spending on this infrastructure. MWC Barcelona 19 this week left little doubt what many believe to be the answer: virtual reality and cloud gaming.

Across the sprawling showroom floors and the flood of press releases, it was hard to find anyone who wasn’t eager to talk up the potential for these overlapping services. While 5G promises to enable all sorts of disruptive uses, like smart cities and connected factories, VR and cloud gaming are increasingly seen as the most promising ways to convince consumers to pay for new services that will get them on the 5G bandwagon.

By the same measure, 5G offers a shot at redemption for two technologies that have seen their own cycles of hype and disappointment as sales, technology, and experiences repeatedly failed to meet expectations. Industry insiders are betting that 5G is the missing ingredient that will allow them to finally win over consumers.

“This is a key use case for 5G for telecoms to reach the residential markets,” said Javier Polo, CEO of PlayGiga, a VR and cloud gaming startup based in Madrid.

Certainly hype around cloud gaming has been building over the past year. The Research and Reports firm projects the global cloud gaming market will grow to $6.226 billion by 2026, up from $765 million in 2017. The reasons point to a kind of two-step evolutionary process that telecom firms envision for the adoption of 5G.

Today’s landline broadband connections are growing so quickly that streaming quality has improved dramatically, making multi-player gaming, in particular, more reasonable. Polo notes that this offers immediate payoffs in global markets where large percentages of users don’t have powerful enough PCs or consoles to play the latest games, numbers that spike in developing markets. Streaming eliminates that issue, while also offering subscription-based payments that provide access to a huge catalog of games.

While systems like PlayGiga work with 4G networks on mobile devices, the latency completely disappears with 5G. On top of that, 5G will allow VR and AR headsets to be untethered, allowing users to access content and connections from anywhere. (PlayGiga demonstrated its service at the Vodafone booth at MWC, and the two companies have a research partnership.)

But PlayGiga is already powering cloud gaming services for carriers in Italy, Argentina, and Chile and is talking to carriers in the U.S. These carriers charge customers a monthly subscription fee, of which PlayGiga takes a cut.

The startup also offers a $110 retail version in Spain that comes with a set-top box for TVs, a game controller, and a six-month subscription. In a demo at PlayGiga’s MWC booth, Polo tapped the service on a smartphone and launched into Rise of the Tomb Raider in about 30 seconds.

“We can stream to any device,” he said. “It’s just a question of the market being ready.”

The market for cloud gaming has been building momentum over the past year. EA’s acquisition last May of GameFly’s game streaming technology sent a shock through the industry. EA later announced its cloud-based gaming technology, Project Atlas.

MWC saw a flood of related announcements. Vuzix unveiled its M400 enterprise smart glasses, which use Qualcomm’s Snapdragon XR1 platform. Qualcomm was particularly bullish on cloud gaming and VR. The company also demonstrated XR viewers (Extended Reality) that could be paired with high-end handsets from partners such as Xiaomi, Vivo, OnePlus, LG, BlackShark, and Asus.

Sprint announced a partnership with Hatch Entertainment to offer mobile cloud gaming services in the U.S. on its 5G network.

Around the show, VR and cloud gaming were ubiquitous, with carriers, chip makers, and partners eager to dazzle attendees and make 5G seem more concrete. 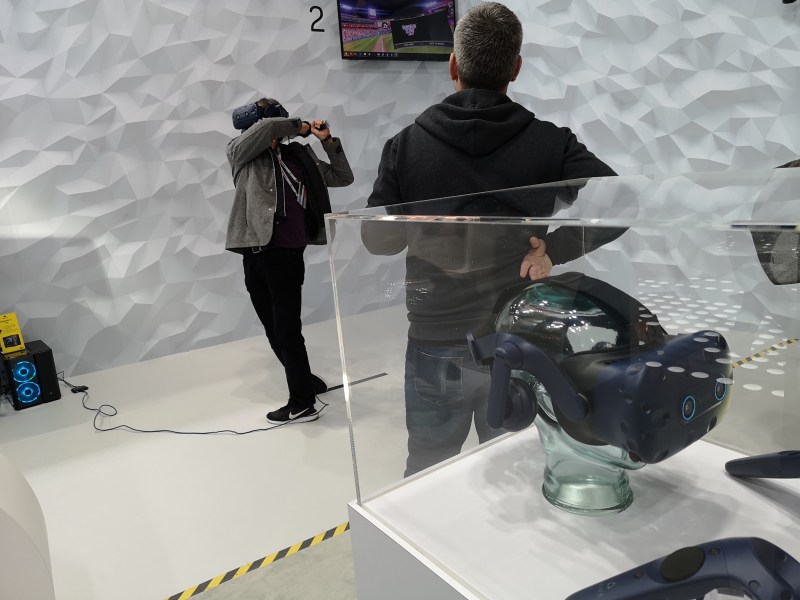 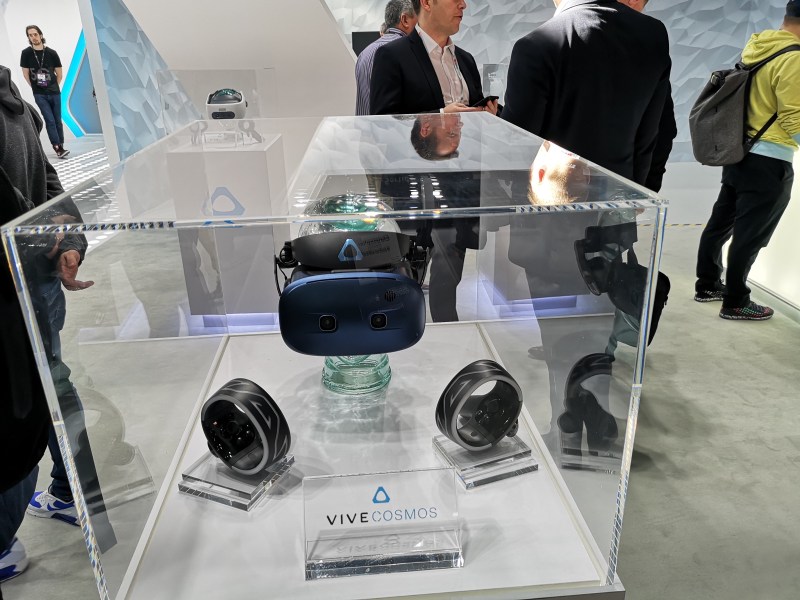 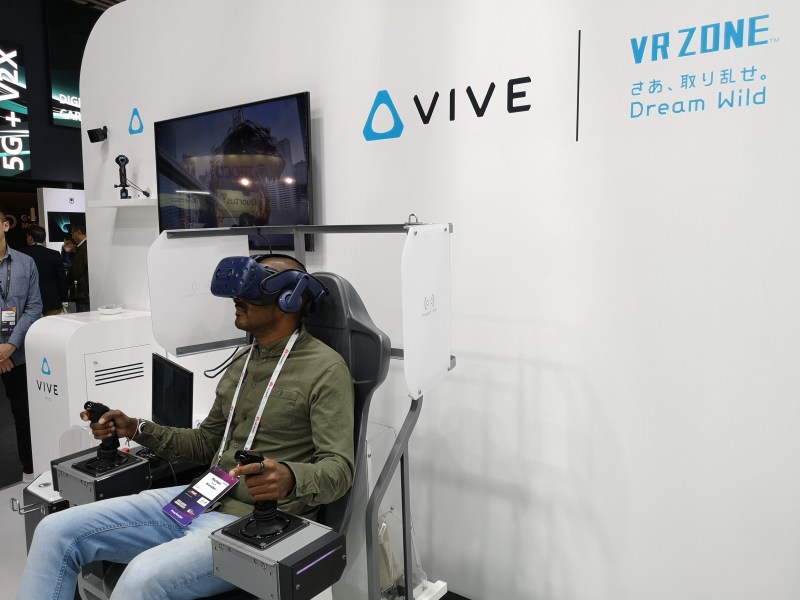 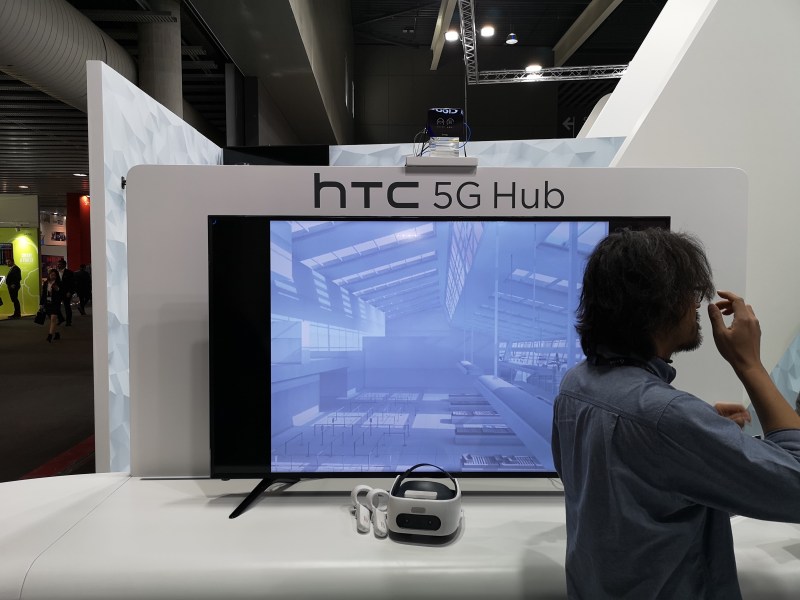 Ericsson, meanwhile, was playing up its partnership with Blade to deliver cloud gaming. 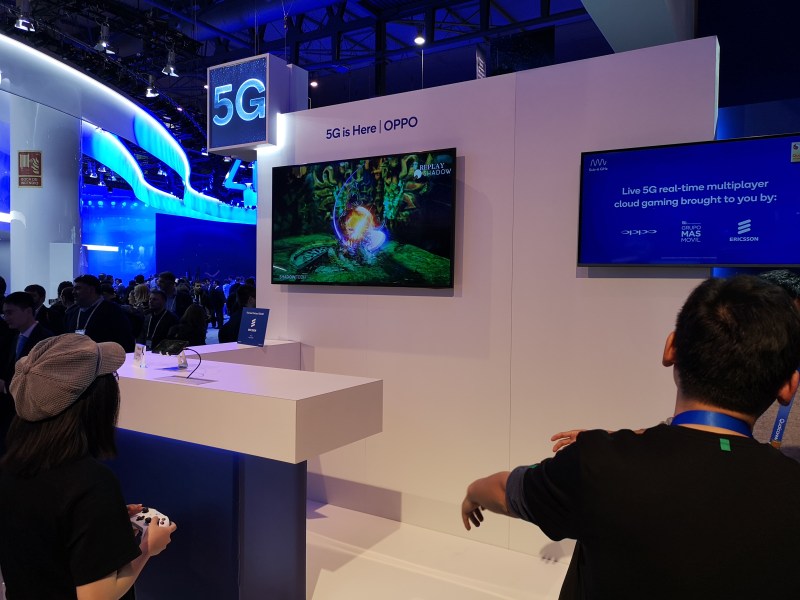 Huawei didn’t have an announcement, but wanted to show off its own advances. 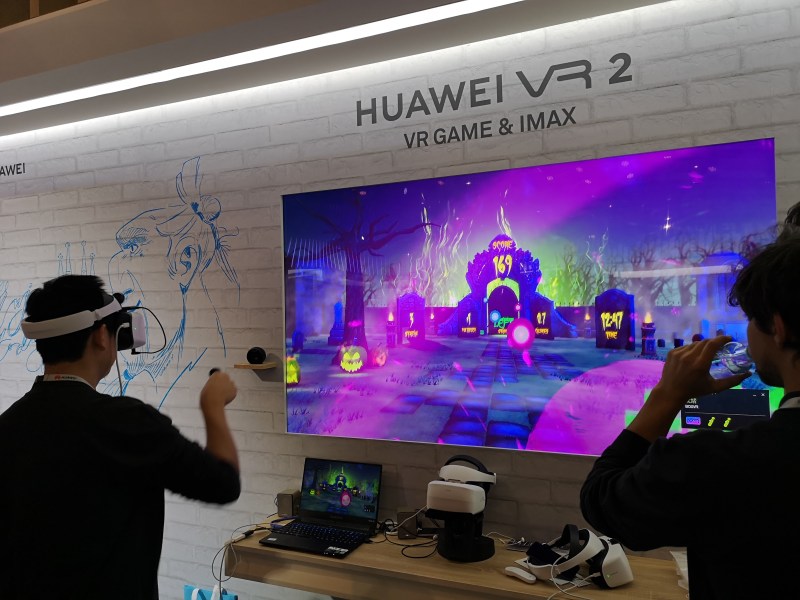 Nokia is also pushing VR and cloud gaming as it tries to convince carriers to accelerate purchases of network gear for 5G. 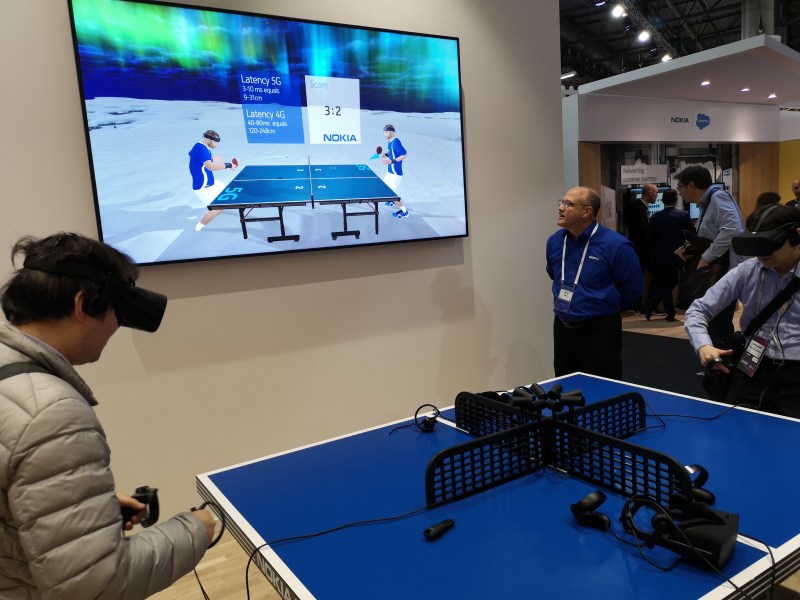 The multi-player version of the Spider-Man: Far From Home game released last year has been turned into a streaming game for 5G that drew big crowds at Nokia’s booth. 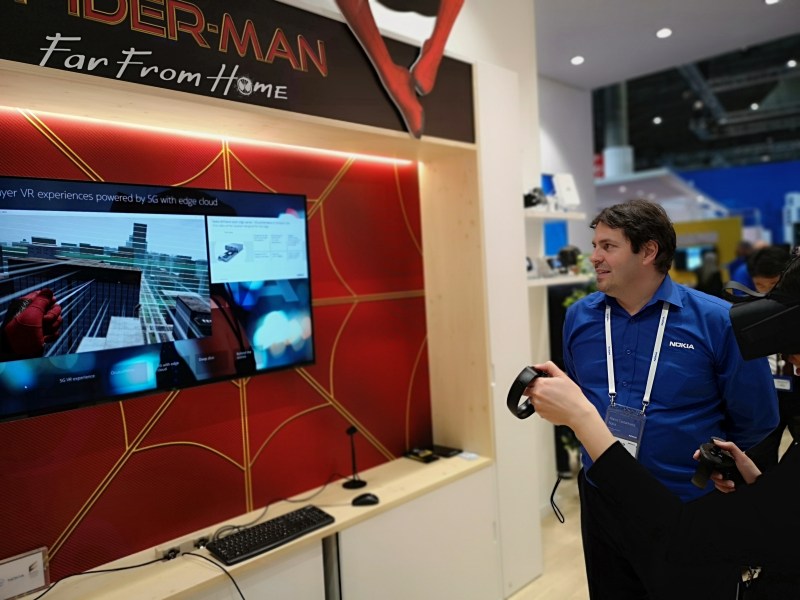 And PlayGiga was center stage in Vodafone’s booth. 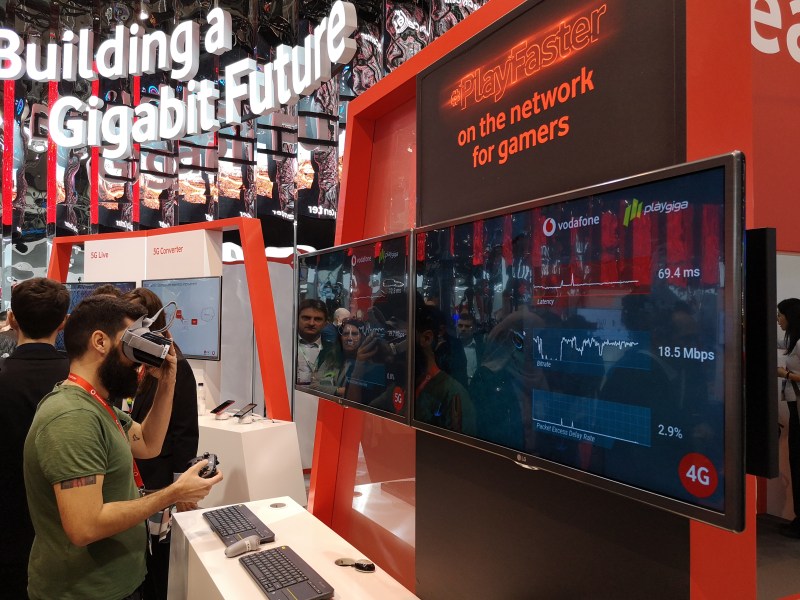 Qualcomm’s bets on cloud gaming and VR were prominent. 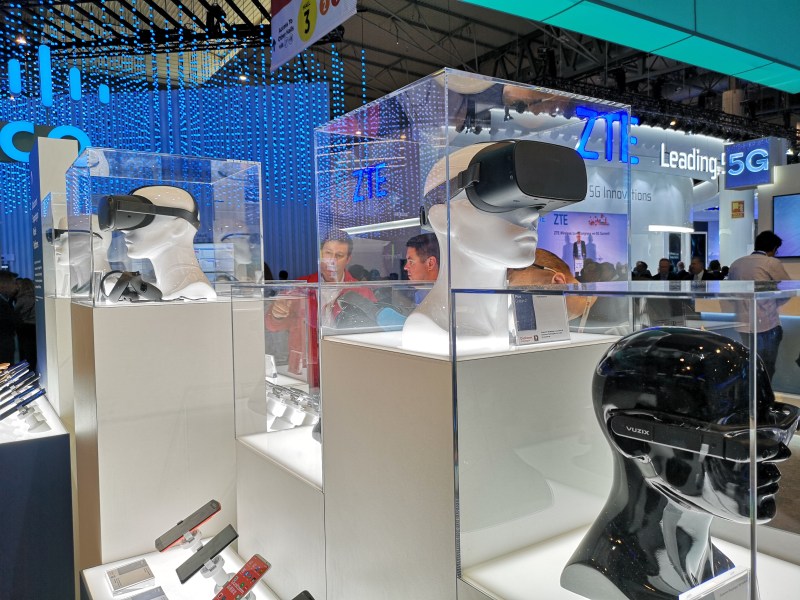 With Intel also making a bid for this market. 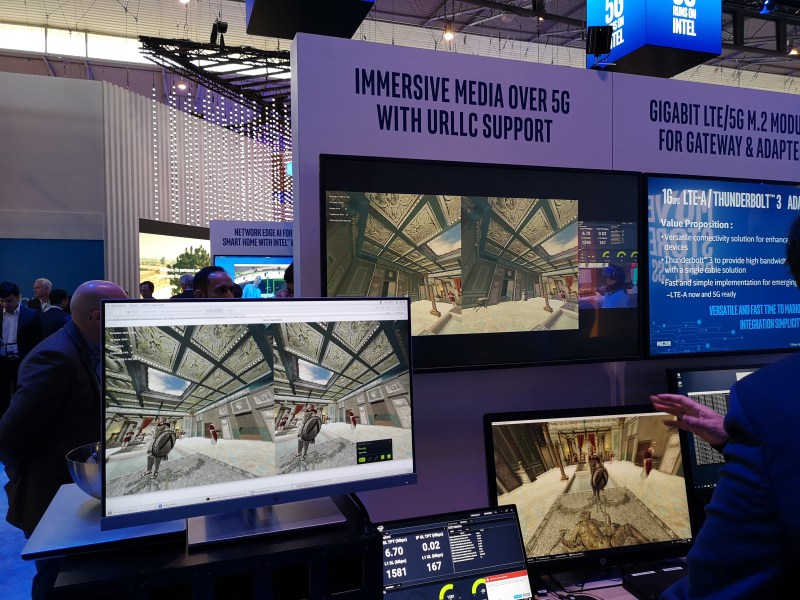 For now, cloud gaming seems to be a safe bet for carriers, a way to get users to pay for one more subscription service. Whether that will truly translate and drive greater adoption of 5G services remains a bigger gamble, even as carriers move ahead in hopes that they can entice consumers to come along.