By 2035, as baby boomers age, the elderly will outnumber children for the first time in U.S. history. It is a demographic curiosity that will similarly play out around the world as populations lean increasingly elderly leading up to 2030, by which time every baby boomer in the planet will be over 65.

It should not be all that surprising, then, that businesses are following the trend, and that emerging technologies like VR are being catered, more and more, to what tends to be the wealthiest segment of the population.

Last month, Sol Rogers, CEO and founder at REWIND, marked World Senior Citizen’s Day by featuring five companies that are using VR to improve the lives of seniors. “From reducing loneliness to transporting the infirm to far-flung places, without the need to travel, VR is enhancing the lives of senior citizens across the globe.” wrote Rogers. Indeed, the use cases in which VR is proving to make a real difference for the elderly are beginning to pile up.

As effective as the real thing

One of the sectors where VR is most effective is in serving as a scalable alternative to traditional training methods, which otherwise require in-person programs to have the best outcome. Take the case of accidental falls, for example, which accounts for 30 percent of what is a leading cause of hospitalized injury for older adults worldwide. Balance exercise programs reduce the incidence by about 21 percent.

That VR is a practical and effective alternative that offers similar improvement and adherence rates as real world training is what a study published last month on Dove Press journal, entitled “Clinical Interventions in Aging” illustrates.

Another study published in July, entitled “The effectiveness of virtual reality for people with mild cognitive impairment or dementia” reports that “VR offers cost-effective, accessible, flexible, and comprehensive interventions for patients who have difficulty attending outpatient appointments due to distance, lack of transport, or disability.” Moreover, immersive training programs can be designed with interactive storytelling that tends to invariably elicit high levels of engagement. 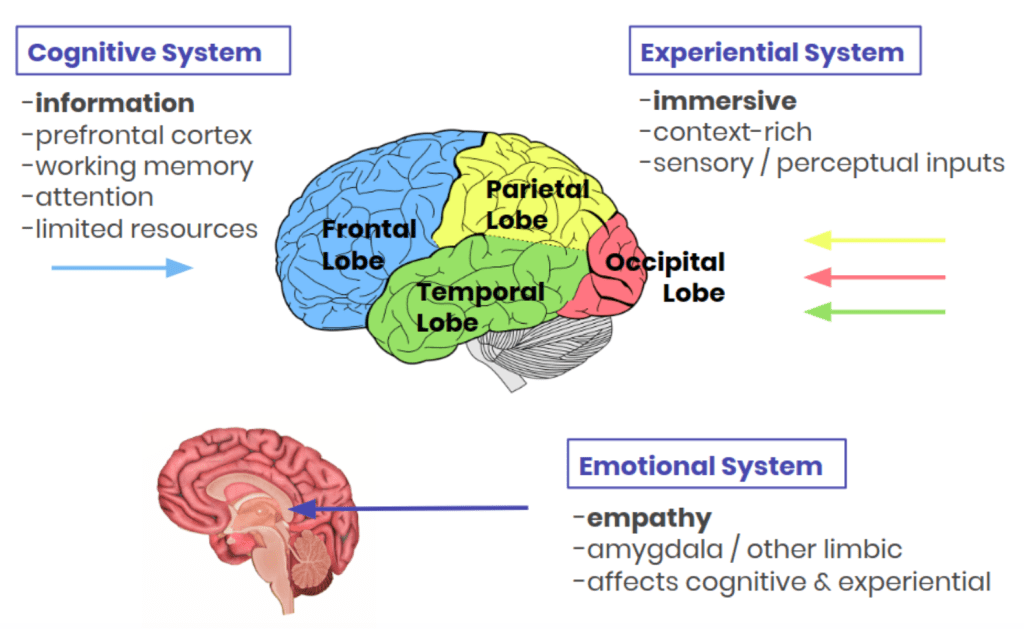 “Whereas traditional approaches to learning engage only the cognitive system, and thus are challenging and are at risk of forgetting (the brain is hardwired to forget), VR broadly engages experiential, emotional, cognitive and behavioral learning systems in synchronicity,” said Tim Fitzpatrick, CEO at IKONA, the company that is using interactive storytelling to train and educate the aging population, as well as their caregivers. “This leads to broad-based, contextually rich, and highly interconnected memory traces that develop quickly are retained for a long time, and are much more immune to forgetting.”

Our physiology and physicality happen to believe that an immersive experience is real because VR as a digital format combines spatial representations of data with our vestibular and proprioceptive senses. This makes sense since extensive psychological research has demonstrated that cognition is inherently embodied. In other words, in order to learn naturally and effectively, it is critical to engage multiple learning systems at the same time, which means that we need to involve our whole body in the experience in order for it to stick for the long-term.

“Whereas traditional lecture or text-based approaches to learning focus on information, VR focuses on experience. Information is processed by the cognitive skills learning system in the brain that encompasses the prefrontal cortex.” says Todd Maddox, Immersive Learning and Data Scientist at IKONA. “This is an amazing system but one that is limited by working memory and attention capacity. Processing information when learning means that 2-dimensional, static (and usually abstract) information such as text must be translated into 3-dimensional dynamic, real world representations in the brain. Simply put, this is very hard to do and taxes the working memory and attention systems.”

I personally made great strides in reducing my fear of heights by using VR simulations like Birdly flight simulator, and so I know what immersive experiences are capable of doing for applications like exposure therapy. For seniors, the power of the medium extends into serving as an ideal environment for reminiscence therapy, or for any therapeutic purpose that is facilitated by the act of transporting a user into experiences otherwise out of reach and unavailable.

Studies have been revealing for years that prolonged social isolation can be as destructive to our health as smoking 15 cigarettes a day, especially if you are over 50. Loneliness can be lethal; worse for your well-being than serious medical conditions like obesity, and can even accelerate the onset of dementia, which can begin as early as 45. It is an increasing health concern that VR is particularly well suited to address because of its innate capacity to transcend physical limitations.

Enter Alcove, a platform with immersive and interactive content from multiple developers and content creators around the world created by AARP Innovation Labs. It was developed in collaboration with Rendever — a startup which has a virtual reality platform that provides cognitive stimulation and socialization to seniors. Alcove was created as a way to remove the barriers created by social isolation. The immersive ecosystem that AARP has built at human scale allows users to enter and navigate on their own or in multiplayer with their family and friends. Alcove seeks to bridge the physical distance between family members and empowers people to experience new places and things that they wouldn’t otherwise be able to do due to cost, time or mobility constraints, which is a recurring theme we see with VR. 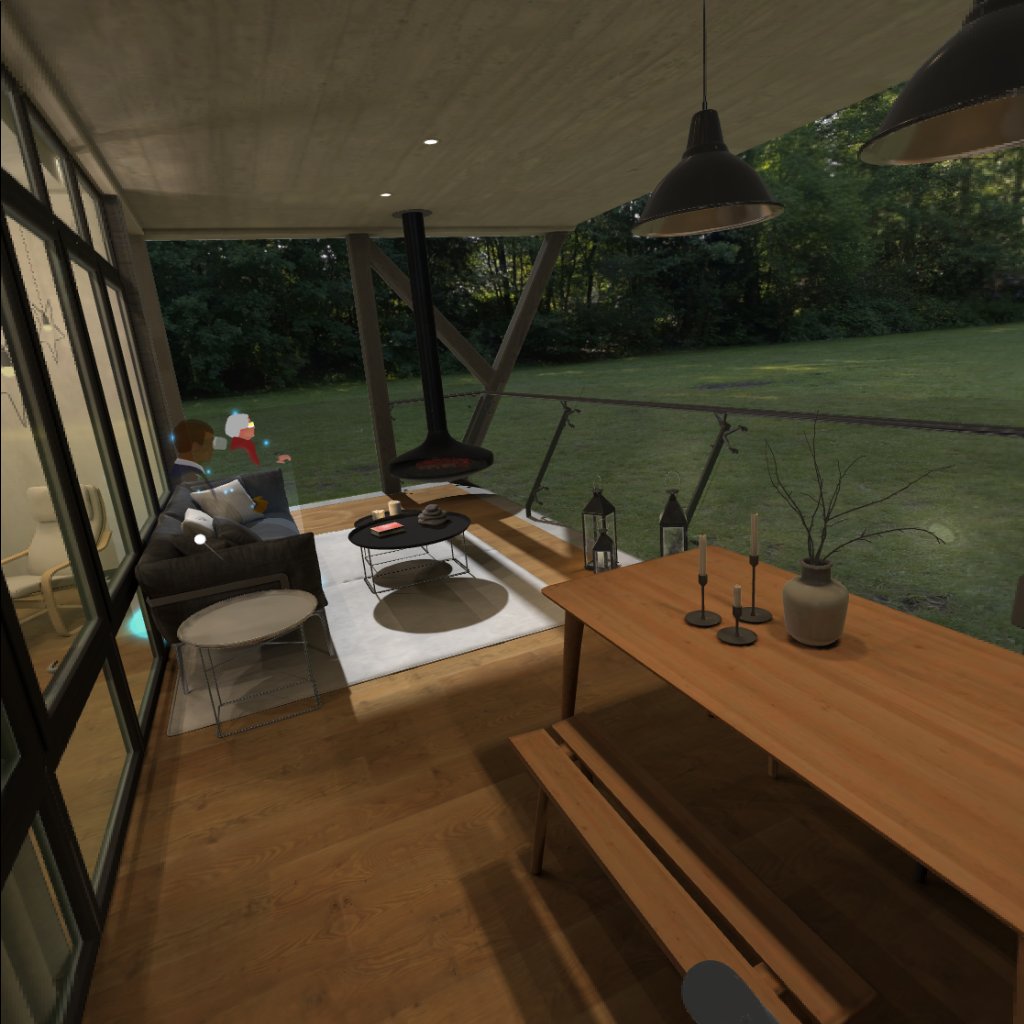 “The space at first glance seems to be a simple and familiar modern home environment, complete with an entertainment center, a family room, human scale furniture, and photos on the walls. But once users familiarize themselves, they notice they aren’t in an ordinary home with ordinary rooms.” said Cezara Windrem, Innovation Catalyst and Head of VR at AARP Innovation Labs. “There are no bedrooms, bathrooms, or kitchen. Instead, it is home to a magical space that invites discovery and allows users to transport themselves to new worlds, and explore the complete immersion and interactivity that VR has to offer.”

There is, however, other aspects to the potential scope of influence that spatial computing promises, and the one that excites me the most is at the point in which it intersects with AI, big data, and the gamification of the sciences. The first area where this is happening is in the research of Alzheimer’s, a disease that someone in the world is diagnosed with every three seconds. In fact, dementia is no longer some looming concern but a global healthcare crisis, and is set to impact the lives of 135 million people worldwide by 2050.

One major barrier in the study and discovery of new methods to diagnose and treat the cognitive illness has been a lack of data, and it is here that Sea Hero Quest, the first VR game to help scientists fight dementia, comes into serious play. The ambitious project was developed by game studio Glitchers on behalf of Deutsche Telekom and Alzheimer’s Research UK in order to help scientists establish for the first time a global benchmark for healthy human spatial navigation. 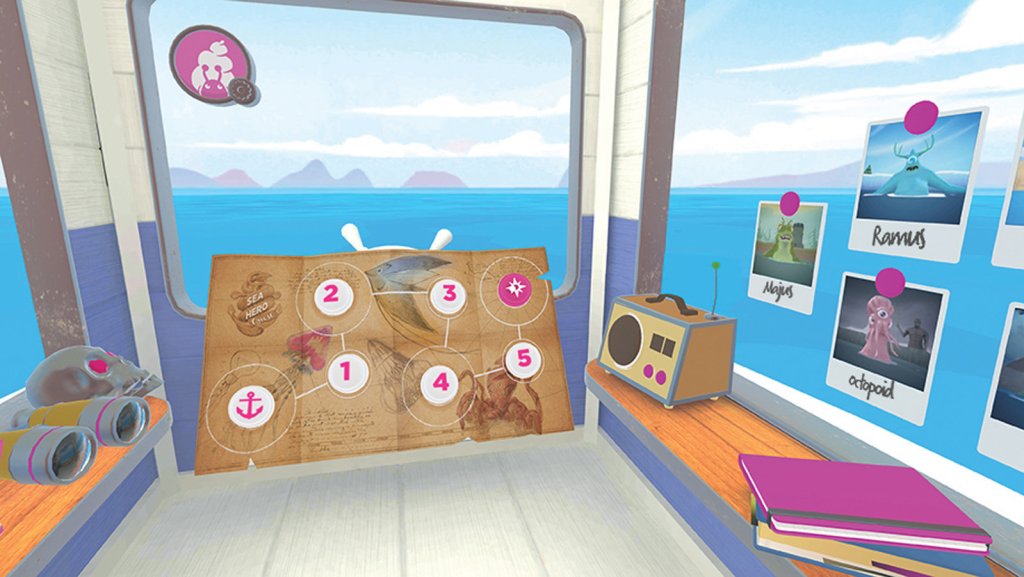 The game is made up of a series of challenges and tasks that are designed to get closer to real-world situations that investigate the effects of an immersive environment on the spatial navigation strategies made by people of all demographics. Since the app enjoys having both a mobile and VR version, it offers a special vantage point to illustrate the extraordinary capabilities that spatial computing makes possible with an additional dimension at its disposal.

“Whilst both Sea Hero Quest VR and mobile accurately measure human spatial navigation ability through gameplay, Sea Hero Quest VR offers a much higher level of tracking precision as it allows the capture of yaw (y axis), pitch (x axis) and roll (z axis) data. For example, it will capture more ‘natural’ human behavioral responses such as turning to look around an environment when the player is lost.” said Daniel Jäger, Senior Marketing Manager at Deutsche Telekom and a project lead at Sea Hero Quest.

What is crazy is that every two minutes spent playing Sea Hero Quest in VR generates the equivalent of five hours of traditional lab research. The mobile version, for example, collects gameplay data every 0.5 seconds, while the VR counterpart does it every 0.1 seconds. Needless to say, it has exceeded all expectations by increasing the precision of the data collected, giving scientists navigational data that is 15 times more precise and therefore gives an additional edge that an exponential technology like VR has always been promising.

Indeed, VR is delivering on its promises just as I described in my piece last January on the happy pair that impact investing and emerging tech make. Slowly but surely — then suddenly — we will see its potential  realized for unlikely demographics, like the elderly, who we might have not been fully appreciated as the ones to benefit most. Until now.