Virtual reality in the home is taking off slower than expected, as evidenced by CCP Games’ decision to shut down VR game development. But there’s a good chance that VR will find a way to thrive in arcades, whether in Asia’s internet cafes or America’s shopping malls.

Should VR game makers pivot to the arcades? Greenlight Insights recently staged a whole conference about this opportunity, where 450 people talked about the prospects for location-based VR entertainment and other opportunities. In some ways, it makes sense as high-quality PC-based VR is still expensive to buy, and arcades can write off the equipment over many users. 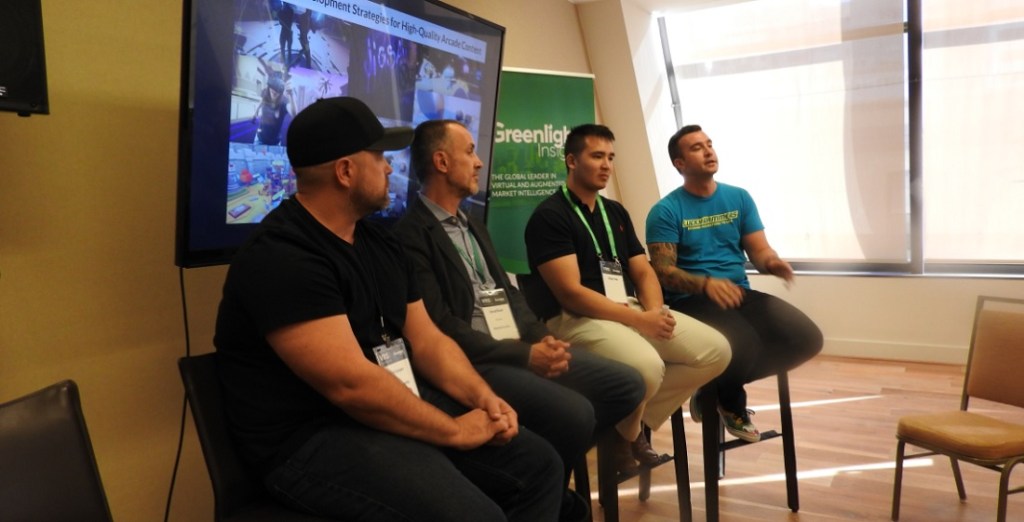 Nick Cooper: I’m from VRX Networks. We’re a production and distribution company. We produce our content in-house, but we also work with content providers, and we have a range of VR kiosks here in the U.K. We’re expanding into Australia and South America.

We work exclusively with movie studios. We have a multi-picture deal with Sony. We started off with Emoji Movie, we just released Jigsaw, and we’re about to release Jumanji. For us, we have these kiosks and franchisees who host them, and we provide a constant stream of movie-based experiences into those kiosks.

Jonathan Flesher: I head up business development and partnerships for Baobab Studios. Baobab creates narrative, story-driven content in a VR environment. The first one was Invasion!. The second one, Asteroids, is coming out this holiday season. The third, Rainbow Crow, will be some time next year.

Vien Ha: I head iSimu VR. We’re a virtual reality arcade, and the well-known secret is we’re also a software company. We’re developing VR arcade management software, similar to Springboard. Today’s our first announcement around that. It’ll be released in about two months. I’m also an advisor for Subdream Studios in the commercial space.

Marc-Antoine Pinard: I’m from Lucky Hammers in Montreal, although now I’m Los Angeles based as well. We used to be a game studio, and now, we’re a technology company. You can try Apex, which we just announced yesterday in a partnership with Starbreeze, on their StarVR technology.

Basically, we’re a bunch of guys from movies, gaming, and location-based entertainment. I came from a company making arcade games. If you ever played Fruit Ninja on the big screen at Dave and Buster’s, that was us. We’re world builders. We believe in a cross-platform strategy, taking a story and finding different angles on it using different media. All this other stuff notwithstanding, books are still good, right? It’s just a question of taking storytelling to a new level.

Along with the release of Apex, we’re announcing a partnership with A&E and one of their TV shows, creating something that’s an in-depth experience and a historical piece as well. We have much more to come. 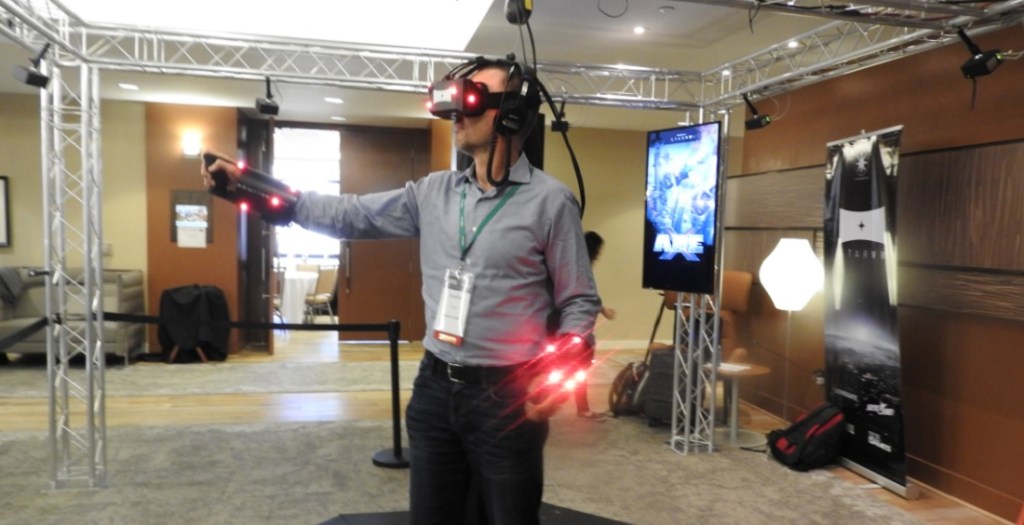 GamesBeat: As far as a development strategy for VR arcades, who wants to tackle that first? When you started thinking about arcades and VR content, how did you approach that?

Cooper: I come from an LBE [location-based entertainment] background. I worked very closely with Marvel to produce a big touring attraction. When I got into VR, I was fortunate enough to witness some … moving pieces. It’s an amazing platform to tell a story. My business partner comes from a marketing background, and so, we looked at how we could create a Starbucks approach to this, a franchisable approach.

We’re both from the studio end, so our focus was always on studios — developing deals with studios so we can create not just advertising pieces but fully interactive, immersive stories. That’s always been our approach. So, in regards to what content we choose, that’s it. I’ve been in the licensing industry for a long time — everything from stage shows to exhibitions to activations. When that big brand IP is up there and people form a relationship with that, it’s trusted. To have a constant pipeline of that content coming out around the same time as the film, you leverage a lot of the marketing spend and buzz around that to drive people to our kiosks.

GamesBeat: Would you call them games, or….

Cooper: I call them interactive stories, but it’s — I think it’s hard. The emoji thing, it was a less-than-favorably-reviewed film, let’s say? But to us, it didn’t matter. We have these attract loops on the screens, and kids just see these emojis, these funny characters dancing around with a VR headset on. They just come up and put their grubby ice-cream hands all over the thing and [they] want to be part of it. Kids under 12 made up 35 percent of our sales in that first summer holiday period. IP has a strong hold.

Pinard: To your point, it’s not about the success of another medium necessarily driving the success of VR. If you bring in a good simple mechanic to play with, you’re going to get people’s attention. You’re going to get their interest. As far as I’m concerned, ideas are shit. It’s all about execution. If it’s simple, if it works, if people are going straight to it and they’re understanding what they’re doing off the bat, if you don’t need to teach what there is to be done, they’re going to take it from there and make their own dream out of it. That’s where you can catch their attention.

Cooper: A couple sessions ago, someone made a good point. Obviously, there’s a gazillion shoot-‘em-up games out there, right? Everyone loves that. But when you tell stories, like these guys do and like we’re trying to do, you get that connection. People coming into it, they relate with characters. With Emoji, you go in there and interact with High-Five. You see the mirror there and choose to be Poop. You can play Just Dance and get this big thing going on.

With Jigsaw, it’s like an escape room. You have to crank this lever and beat this other guy. It has this ticking time bomb intensity. It’s not as big as Emoji, but there’s a visceral, emotional experience that you get from this kind of story. We have a 95 percent approval rating once people come out. That’s one thing I would say that everybody here — it’s about good content if you’re going to have sustainability. With ILM and VRC and these guys, quality content is what’s going to build this industry. The better the content you have in your arcades, that’s going to be key.

GamesBeat: Jonathan, you guys are taking that approach. You don’t have games either?

Flesher: No, we don’t have games. We don’t specifically design for location-based entertainment. We’re trying to design and drive for that narrative, story-driven experience. We layer interactivity on top of that.

Right now, the market is kind of fragmented. There are lots of different plans and business models around what LBE is. Very much like when the platforms first came out, it’s very focused on games. “Hey, this is great, I can do modern laser tag in these shooting games.” But very quickly, there came an understanding that narrative, story-driven content really does have a place in location-based entertainment.

What I’ve been seeing personally, there’s a kind of full spectrum of everything: from what we do, which is more theatrical with some interactivity laid on top, to video game experiences, to what I would call more “light amusement park” or even heavier amusement park experiences. You might have 4D effects, physical objects, even robotic arms like what Spasis does. All of that spans the definition of LBE. Right now, we don’t develop specifically for experiences that require additional hardware development. 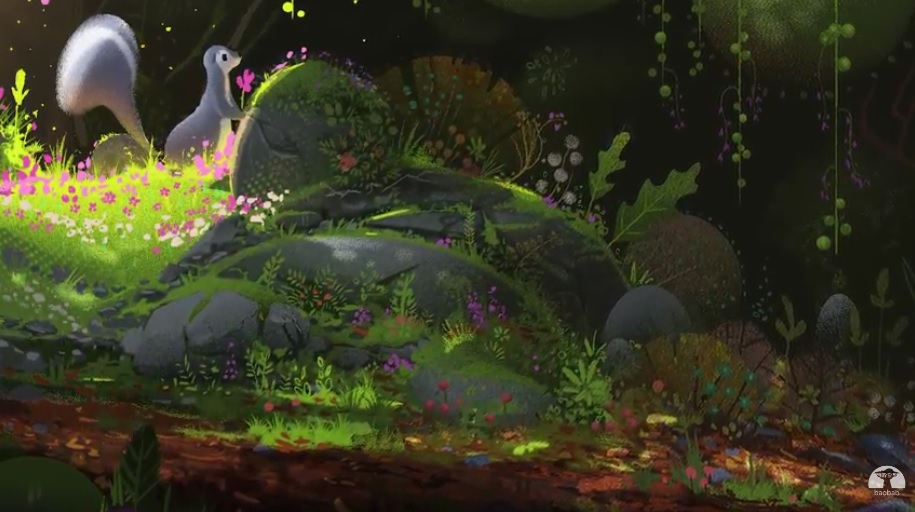 Above: A scene from Baobab’s Rainbow Crow.

GamesBeat: Your first two experiences were pretty short, but Rainbow Crow sounded like it was going to be a bigger experience.

GamesBeat: I wonder how you would try to bring that to an arcade setting

Flesher: That remains to be seen, but it’s coming out in two chapters, so it’ll be more digestible. Right now, most people’s tolerance is relatively short compared to a traditional movie theater, where you’re sitting for two hours, plus or minus a bit. It’s not clear yet how that’s going to play out with the new headsets and things like that. But we’re confident that we can at least do it in two parts, chapter one and chapter two.