Vrenetic said that it will distribute its livestreaming apps in China as part of an effort to expand its market reach with new Chinese partners.

As part of the agreement, Vrenetic is shifting its leadership operations to China to maximize the capabilities of its apps and Weber will relocate to China for a minimum of two years. In an interview with GamesBeat, Weber said he is moving to China.

“We decided to focus more on the Chinese market because of the technology,” Weber said. “If you build a sophisticated streaming app that will render VR, it is obviously much easier to consume for people if they have access to 5G.”

The apps include Vresh, a multiplatform streaming application supporting immersive content and social components that drive community and content engagement.

Since its release, Vresh has provided a space for 360-degree and immersive content creators to livestream, publish, and share to growing alternative media consumers around the globe.

“Vresh is an immersive 360 application for live video live streaming,” Weber said. “As a social media layer, we build an entire media engine.”

Meanwhile, the Tag-Ya app is a location-based localized video messaging application built to create private spaces for the ever-growing Generation Z demographic. Tag-Ya will focus on gamification of real-life experiences users can share with their circle of friends and build realities of their own over existing geography. 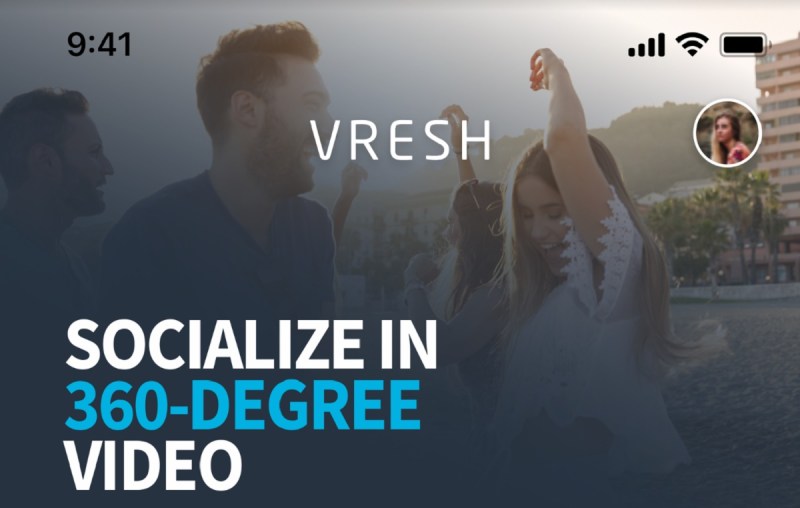 Above: Vresh is one of Vrenetic’s apps that will debut in China.

“We’re very enthusiastic about our partnership with Vrenetic and what their technology can do on China’s 5G infrastructure. It’s truly a global opportunity,” said the Beijing Culture Fund, in a statement.

And Emmerich, creator of the Independence Day film and chairman of Vrenetic, said in a statement, “Marco and I set out two-plus years ago to create a company and apps that changed the immersive viewing experience. This shift to China initially will allow us to maximize that vision sooner and create a template for other markets.”

Vrenetic will receive permits to distribute their streaming applications in the Chinese marketplace, a rarity for non-Chinese companies. In addition to distributing its own apps in-market, Vrenetic will become a “gateway” for app and content creators outside of China, focusing on entertainment, sports, and esports.

European-based esports company WePlay has signed a deal with Vrenetic that will allow the company to stream and livestream events in China.

Yura Lazebnikov, chief business development officer at esports entertainment firm WePlay, said in an email that his company has been broadcasting esports tournaments since 2012.

“For us this was a no-brainer,” said Lazebnikov. “Using our own customized application on the Vrenetic platform will allow us to monetize our events in an efficient way that simply wasn’t available to us before. We’ll be able to work directly with advertisers and sponsors in mainland China, whereas before we just sold the Chinese rights to local distributors.”

He added, “This is big not only for the Chinese streaming landscape but also for the growth of esports in that market, so we’re really excited.”

Vrenetic is 2.5 years old and it has 25 people. The company first launched its app on iOS in the U.S. and then followed up with a European release. It then launched at the Shanghai Film Festival.

He said he was looking forward to living in China, as he was born in Europe and moved to the U.S., and he looked forward to relocating again.

“I’m really excited to have a chance to build a business,” Weber said. “People are very excited about it, as the country is in the middle of covering the entire country in 5G.”

“We have a strong B2B model where we can build applications for esports companies or livestreaming,” Weber said. “We can be a gateway for European and U.S. companies to get into China.”

Weber said the company will reveal the Chinese partner later.

“I wouldn’t want to do business in China on this level without a Chinese partner,” Weber said.