Augmented reality, with its ability to overlay digital imagery onto the real world, shows a lot of promise in doing things like helping guide technicians while they repair machinery. PTC is enabling this application with its announcement today of the Vuforia Studio Enterprise, which makes it much easier to make AR apps.

Needham, Mass.-based PTC had $1.3 billion in revenues last year for its businesses, which include 3D computer-aided design visualization and illustration software. Qualcomm incubated Vuforia and sold it to PTC for $65 million in October. With Vuforia, PTC can take those 3D models and easily integrate them into AR apps, so that you can see 3D models and animations as overlays via AR headsets or iPads. Those animations can show a technician exactly how to repair or maintain a physical machine in the real world. AR is expected to be a $90 billion market by 2020, and enterprise is a big part of that, according to Digi-Capital.

Jay Wright, president and general manager of Vuforia, said in an interview with VentureBeat that the company already has a big head start in enabling AR apps. It is already being used in more than 25,000 apps (with 2015 developer registration numbers up 38 percent from the year before). And Vuforia Studio Enterprise, which is being announced at the company’s LiveWorx 2016 event on the Internet of Things, is making big strides in simplifying the creation of AR apps and democratizing the skills needed to be an AR enterprise app developer, Wright said.

“The AR software can require a lot of effort, but we are unlocking CAD data that makes it much easier to create the application in AR without writing any code,” Wright said.

Vuforia Studio Enterprise is seamlessly integrated with PTC’s Creo 3D CAD visualization and illustration software and ThingWorx Internet of Things (IoT) platform. The latter is an encoded sticker that you aim an iPad or an AR headset at. When you do, the screen generates an animation associated with that particular sticker, so that you can see instructions for maintenance or repair, like how to turn a dial or level on a piece of machinery. ThingWorx and Vuforia are a way to make AR integrate with connected IoT devices, from solar panels to medical devices. 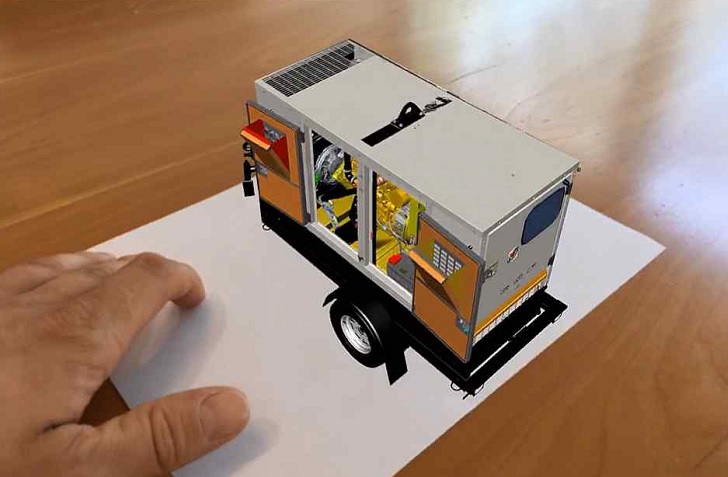 Above: By looking through AR glass at a ThingWorx code, you can see an animated image on top of the physical world.

At the recent Augmented World event in Santa Clara, Calif., Vuforia demonstrated such an app, using the Microsoft HoloLens prototype AR headset. I tried it out, and it worked reasonably well. But it did require a certain amount of fiddling to get the registration to work right.

Vuforia Studio is now available as part of the Vuforia Studio Pilot Program. That’s a paid program through which developers can try out the technology and figure out internally what they want to do with it. General availability for Vuforia Studio will come later this year.

Last year, there were more than 5,000 AR apps built with Vuforia that were not released in the app store. That tells you there’s a lot of pilot program testing under way, Mike Campbell, executive president at Vuforia, said in an interview with VentureBeat. 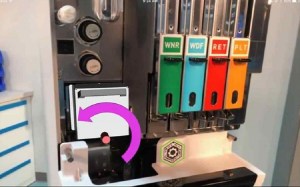 Above: Instructions for a technician are much easier when viewed via AR.

AR is one of the fastest-growing technology segments in the enterprise, but Wright and Campbell said that adoption is hindered by a lack of tools for content authors who can leverage existing 3D assets. Vuforia Studio addresses this challenge and enables development of new experiences for creating, operating, and servicing connected products. The company said that it provides all of the components needed for any solution builder to develop an augmented reality experience, without requiring deep programming knowledge or expertise in augmented reality technology.

The studio lets companies use existing 3D assets from popular CAD software. It can also tap IoT sensor data to find out something like the temperature of a machine or how much gasoline is left in its tank. PTC has 28,000 customers using its products already and currently has 6,000 employees.

One customer, Sysmex, is using AR for its tech services. This medical device company found that it could make its technicians much more productive. In the past, one technician could oversee 30 customers. And with AR and Vuforia, that number is expected to grow to 70.

Vuforia’s AR imagery can be viewed as an overlay on the real world through tablets, smartphones, or AR headsets.