Vysr, the startup whose RoamAbout browser helps you access a variety of Web services from any page, is making good on its early vision to become a platform for third-party applications — as of today, its application programming interfaces (APIs) are available to developers.

On a conceptual level, RoamAbout is similar to toolbars like the one offered by Yahoo — it’s all about making the Web “user-centric”, rather than “site-centric,” i.e. letting users access the services they want from any site. RoamAbout integrates more gracefully with your browser than a toolbar, allowing you to open and close it with a click. For example, if you read about a restaurant that you’d like to visit, you don’t have to open up a new browser tab and jump to a different Web site get a map of the area. Instead, just open RoamAbout and, using the MapQuest tool, bring up a map within the same window. (See screenshot of the new eBay tool below. You can also watch a video demo here.) 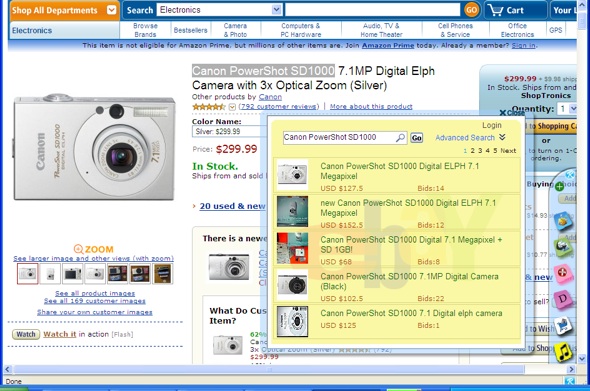 Since launching in public testing mode in April, RoamAbout has been downloaded 10,000 times, says chief executive Guda Venkatesh. The company’s business model revolves around advertising primarily, but Venkatesh says he wants to wait for the user numbers to grow before launching the ad program. Still, there are already positive signs. Many users are keeping RoamAbout open as they browse the Web (rather than minimizing it and opening when needed), which presumably indicates that they find it useful.

One of the most exciting aspects of RoamAbout is its potential as a platform — in other words, Vysr doesn’t just want to provide users with a limited set of tools, but rather an interface that any developer can use to give their Web sites and applications greater reach. You can develop tools for RoamAbout free of charge, he says, and you don’t even have to share revenue with the Palo Alto, Calif. startup. Instead, Vysr will make money by placing ads in the borders around your tool.