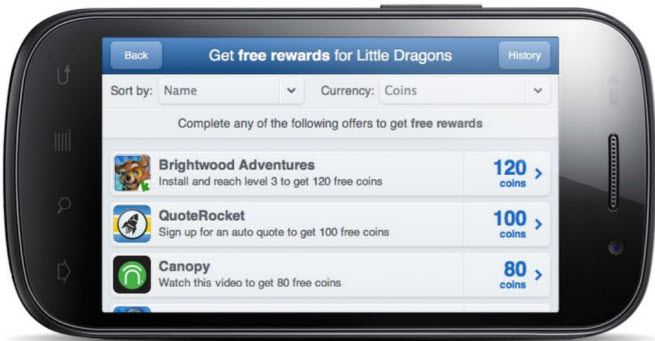 The mobile app monetization business has been good for W3i. The company told us that its revenue grew 330 percent in the second quarter, compared to a year ago, thanks to its success in helping app developers acquire new users.

Minnesota-based W3i helps developers and publishers make money from games through its app monetization and distribution networks. It launches ad campaigns that help developers get lots of installations for their apps and games. In one example, the company said it was able to deliver more than 80,000 app installations in a single day to one developer. Sometimes, that’s what it takes to get an app whose growth has slowed down to start taking off again.

“I think that mobile gaming is a healthy market,” said W3i cofounder Rob Weber said in an interview with GamesBeat. “It is a market of haves and have-nots. Our own growth shows that some companies are extremely profitable. Our sweet spot is to focus on quality developers who have a chance to create a top-grossing app.”

He said that the company has also grown its employee headcount from 76 to 131 in the past year. The company is adding more staff to a new San Francisco office, which currently has six people. Erik Lundberg, an industry veteran and former sales executive at Pogo.com, heads that new office.

The company also said it invested $2.3 million in 16 early-stage mobile developers. That money came from the company’s $10 million AppX found, which it established last year. W3i now reaches more than 13.7 million daily active users across its iOS and Android app developer networks. If you download an Android app, you’ll find that you can purchase virtual goods in the game by accepting a special advertisement known as an offer. You can look at an “offer wall” where you can fulfill an offer such as subscribing to Netflix in order to get you virtual goods. Often, the advertiser only has to pay if the user actually undertakes an action, such as installing an app.

Weber said the growth has come from closely integrating its monetization and distribution strategies into both the iOS and Android apps of its partner developers. Weber said the company also recently launched its offer exchange, which optimizes offers to maximize revenue.

“W3i has established itself as a platform-agnostic service that connects users to great apps, regardless of whether they’re on a mobile phone, a tablet, or a computer,” Weber said. “Over the last 18 months, we’ve increased our focus on mobile, and it’s paying off. This shows the market is hungry for a company like W3i, which will go above and beyond to ensure our partners’ success.”

W3i launched its mobile business in 2010 and kicked off on iOS in January 2011. This year, the company launched on Android. W3i recently partnered with game publisher Pocket Gems to provide monetization for its Android apps. Rivals include firms like Tapjoy and Flurry.