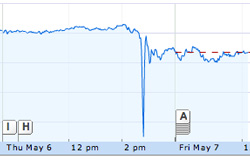 Yesterday’s sudden 1,000-point drop in the Dow Jones Industrial Average was created when a trading glitch caused Procter & Gamble, like a sinking ship, to suck down lots of helpless victims along with it. PG shares dove from $62 to $36 per share faster than Jim Cramer could yell “Buy!” on CNBC.

After trading closed for the day, CNBC published a report claiming a mistyped order for billions, not millions, triggered the mass selloff.

Today, the blame has shifted to the high-speed algorithmic trading that’s become the way Wall Street does business in the past two decades. As a New York Times report put it, “The glitch that sent markets tumbling Thursday was years in the making, driven by the rise of computers that transformed stock trading more in the last 20 years than in the previous 200.”

So what happened? Here’s the for-dummies version of the Times’ report. Don’t confuse yesterday’s automated trades with the Gaussian copula function blamed by many experts for the mortgage-finance crisis which led to our current recession.