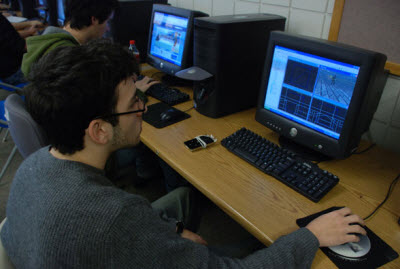 People used to joke about how they majored in video games in college. But it’s not a joke anymore. As jobs dwindle in categories such as chip design, video game jobs have been multiplying. And now there are 254 colleges and other institutions of higher learning that teach video game courses across the nation.

There are now 37 states (plus D.C.) with colleges and universities offering courses and degrees in computer and video game design, programming and art. The programs range from certificate programs in 3D Animation & Interactive Media at Boston University to master’s degrees in Computer Graphics and Game Technology (University of Pennsylvania).

It’s a sign of how important video games have become as part of the economy and culture of the United States. The spread of gaming reflects shifting demographics as young people embrace games and ditch the media of their parents, who watched a lot more TV and read newspapers and magazines.

California has more institutions teaching video games than any other state at 46, followed by New York with 21, Texas with 20, Florida with 19, and Illinois with 16. And it’s not all about kids stuff. The training covers the use of games as a medium for education, professional training, and electronic learning. Making video games is a multidisciplinary trade that involves creating stories, characters, animations, sounds, music, and programming. Those are skills that you can’t pick up easily outside of a dedicated academic program.

There’s no question that games are popular, with hardware and software console game sales hitting $21 billion in the U.S. alone last year. About 68 percent of American households now play video games, according to the Entertainment Software Association, the game trade group that released the data on colleges.

The question is whether or not there are enough jobs to support all of the students getting out of those schools, particularly in a recession that is hurting sales and forcing the closure of a number of game studios. In 2006, there were more than 80,000 people directly and indirectly employed in the video game business in 31 states, according to a study (paid for by the ESA) by Economists Inc. Total compensation generated was $2.2 billion in 2006.

Luckily, even as console games shrink this year, there are vibrant parts of the industry in social games, online games, and casual fare on mobile phones and the web. As games become a big part of the economy, it will be interesting to see if they can gain respectability in political circles, where issues around sex and violence are often the topic of discussion.

So is majoring in video games a wise course of action? If you look around and see how plain-vanilla software programming jobs are moving overseas to low-cost areas, and how electrical engineering jobs are also drying up in areas such as computer hardware and chip design, it makes sense to think about games as a career. Since games require a deep understanding of a culture, they’re not as easy to outsource as other jobs (though it does happen).

One of the coolest developments in recent years was the rise of the iPhone and the ability for novice game makers to come up with hits on that device and others. Since console games cost tens of millions of dollars to make, small independent game developers often have no chance at making such games. But they can and are making a lot of titles that gain success through various kinds of digital distribution.

The biggest strike against the industry was the black eye it got for overworking people and failing to pay overtime for “crunch time” when everyone works long hours to get a game out. The industry had to start working that out a few years ago so that it complied with state overtime laws.