You want a tiger delivered? Just text the details and Magic’s got you covered.

Last week, the founders of the Y Combinator startup Plus Labs began quietly testing out a new service with a simple premise: If you have a need, any need, text it, and lo and behold, someone will show up at your door with what you asked for.

They called it Magic, and to hear Plus Labs CEO Mike Chen tell it, the idea was simply to see if it worked. The five founders of Plus Labs, which set out to make the blood pressure app Bettir, wanted it for themselves.

The team shared Magic with a few friends, but then those friends shared it with a few other friends, and within hours, the service “blew up,” Chen told VentureBeat in an exclusive interview. It went viral on Product Hunt, reached the top of Hacker News, and now the little test project has turned into a full-blown product. 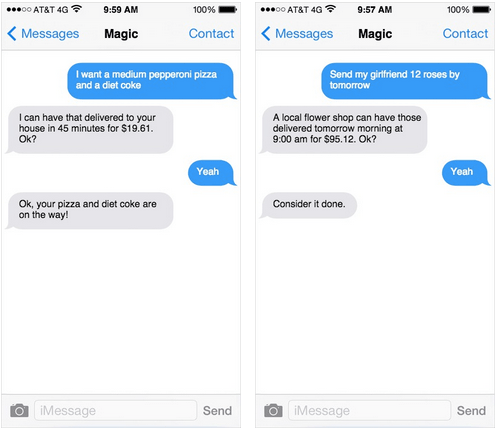 Above: Some examples of how people have used Magic.

The premise couldn’t be simpler: If you want or need something, and it isn’t illegal or too “unusual,” Magic will take care of it for you. All you have to do is text what you want to Magic’s phone number, and they’ll make, well, magic happen.

Magic isn’t promising to fulfill every request itself. Rather, it is promising to figure out who can do it and then make that happen. It charges the cost of taking care of the request plus a fee for its time. But Chen said the particulars haven’t been fully worked out. The more difficult the request, the higher the fee. Order food to be delivered to a snow-bound mountain-top aerie? No problem, but it’ll cost you. Right now, he said, “we’re dealing with [fees] on a case by case basis.”

That’s in part, he added, because Plus Labs didn’t put Magic out into the world last week as a fully baked product. “We actually didn’t intend for this to be a business” originally, Chen said. “We wanted to create something we wanted.”

Right now, Magic is early enough in its development that things are very much in flux. That means, for example, that Plus Labs has built back-end software to help handle the texted requests, and that “every few hours, we upgrade the software,” Chen said.

There are, of course, plenty of services out there built around the idea of fulfilling people’s requests. Perhaps the best-known is TaskRabbit. But Chen said that while TaskRabbit is very useful, it can be slow and require too many back and forths. Magic, on the other hand, involves just a few text messages, something that can be done while in a meeting or, say, during a romantic evening.

Texting someone a request during a date may sound less than romantic, but try this on for size: Chen said his favorite Magic request so far was someone on a boat in San Francisco’s plea for sushi and flowers.

“Judging from his [happy] response,” Chen said, “I think it went very well.”

Chen said the requests have been coming fast and furious, and Magic has been able to fulfill a very high percentage of them. They’ve ranged from simple grocery shopping to pizza delivery to finding the best way to book a plane ticket.

But Chen said he thinks the real value of the service may be in having someone at the other end of a text message who can put on their thinking cap and figure out how to solve complicated problems. Need a tool to fix a broken bicycle? Well, give Magic the basic information about the bike and “if [a Magic rep is] resourceful and determined, you can make it happen,” he said.

Chen said that right now, Magic is trying to determine the logistics. There are, he said, rules governing who can possess such animals. “Undoubtedly, we’re going to deliver a tiger at some point,” he said. “The only bottleneck [right now] is finding out if this person is eligible.”