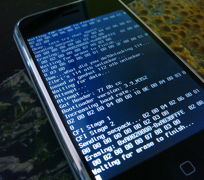 A lot of people bought and unlocked the first generation iPhone to use all around the world. Apple chief executive Steve Jobs even made a joke about it during his WWDC keynote address.

Knowing this, Apple and AT&T are reportedly finalizing a way in which every iPhone sold in the United States would have to be activated with AT&T. In other words, there will be no unlocked iPhones sold in this country unless you don’t mind unlocking it and still paying AT&T a monthly service fee.

The rest of the world could be luckier however. Because Apple has deals with a different carrier in almost every country, it has had to agree to a wide range of prices and options for selling its iPhone 3G. It’s likely that in quite a few countries outside of the U.S., you’ll be able to buy an iPhone without a contractual agreement.

This non-subsidized iPhone would likely cost around $600, according to Piper Jaffray analyst Gene Munster.

$600 is a lot, roughly three times the amount the device will sell for when subsidized around the world. But it’s also the price of the original 8 gigabyte iPhone. Plenty of people had no problem paying that a year ago, so will they now do the same to unlock the new phone?

Munster believes that some will — especially in Europe — but that it won’t make up a huge percentage of sales worldwide. While 1 million of the estimated 3.6 million iPhones sold in Europe this year may be sold as “pre-paid,” worldwide those numbers will be only 2.7 million pre-paid out of 12.9 million sold. Again, these numbers are based on sales estimates.

In North America, which one can assume will not include the United States, since Apple and AT&T have given no indication that they will sell an iPhone without a contractual agreement, the number of pre-paid iPhones sold is expected to be 1 million out of 8 million total units.

More impressive is that the estimates from Gartner and Piper Jaffray have the iPhone controlling 17 percent of the worldwide smartphone market by the end of 2009. In North America, they expect that number to be closer to 30 percent.

Find the full chart with the estimates below. 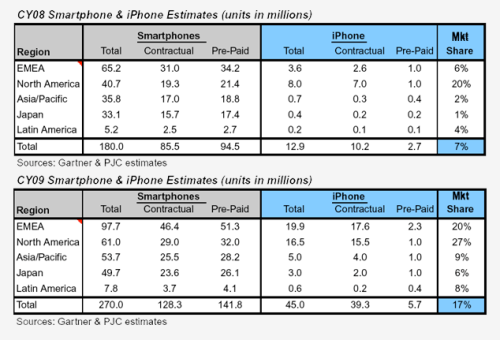