Wargaming showed off World of Tanks AR Spectate at the TwitchCon event in San Jose, California. I saw a demo of the technology, which was cooked up by a special projects team in Wargaming’s Sydney, Minsk, and Austin studios.

The prototype lets you see replays of World of Tanks PC battles on the table in front of you. It’s a big step forward in mobile AR graphics, as it essentially blends together the real world with PC-quality graphics on the screen of an iPad. I saw a demo of the prototype at TwitchCon, where it was shown for the first time in the World of Tanks booth. 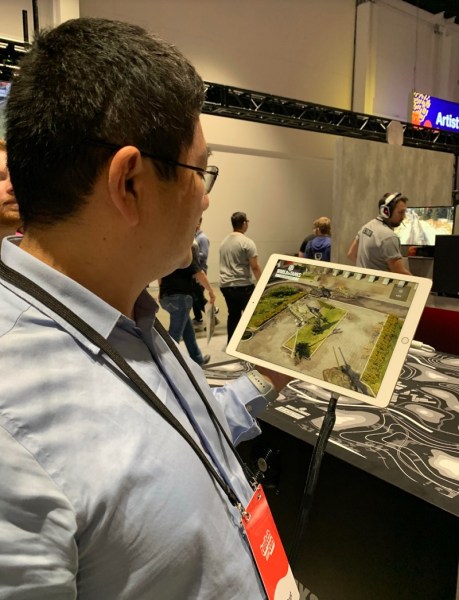 Streamers were invited to take mixed reality selfies and engage with the content as part of their streams. It was a pretty cool way to expose streamers and fans to World of Tanks gameplay.

The PC does all rendering (WoT1.0 max settings) and sends that back to the iPad as video.

Matt Daly, special projects lead at Wargaming, said in an interview that the demo can do replays only for now. It streams the visuals of the battle replay from a PC to an iPad, which then uses the ARKit technology to place the imagery of the battle on top of a table in the real world. You can see the battle play out on the table, but you can also see the rest of the real world that is not occluded (obstructed) by the table. You simply point the iPad camera at the table and then start walking around it. The 3D imagery adjusts and moves with you, based on your point of view.

Daly’s team connected the PC to the iPad using a CAT6 cable. And they were able to show the same visuals on two monitors in the Wargaming booth so that everybody could see what the person with the iPad could see.

“ARKit slams the video to the table, and it’s a level of graphical fidelity that nobody has ever done with a mobile device,” Daly said. 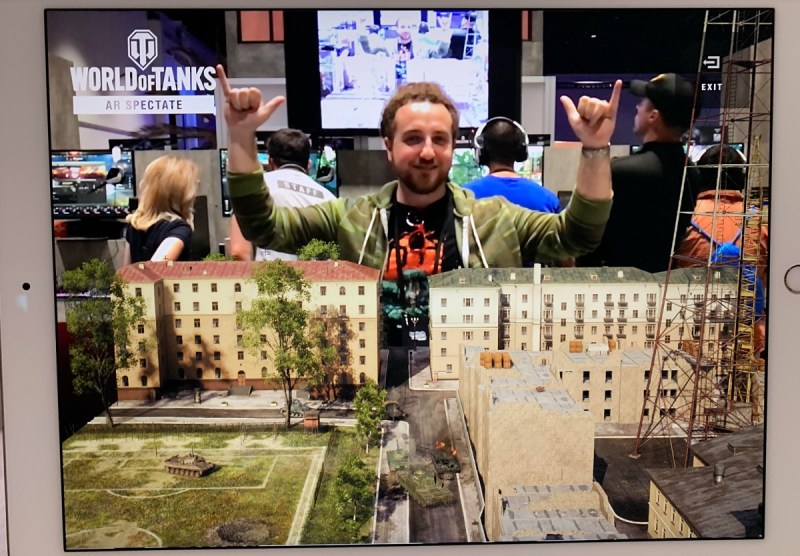 It was a pretty cool demo, with the tanks blasting away at each other at short range. It was pretty and loud. There were plenty of streamers taking mixed reality selfies — like I did. Wargaming is getting reactions for now, but it is considering how to use the same tech for live matches.