Warner Bros. Interactive Entertainment and HBO saw great success in the launch of their mobile strategy game Game of Thrones: Conquest in October 2017. And now the companies are releasing an update that will allow players to own dragons in the lands of Westeros.

It’s a big moment for a game that has helped establish WBIE as a player in the mobile games business. The game has spent more than 25 weeks in the App Store’s Top 50 grossing iOS apps, peaking as the No. 1 free-to-play strategy game in the U.S.

“Mobile is the fastest growing segment of our overall portfolio,” Haddad said. “Game of Thrones: Conquest is one of our top performing games on our portfolio to date.”

Boston-based Turbine, which previously made MMO games based on Dungeons & Dragons and The Lord of the Rings, has now transformed itself into a mobile game studio, and it is rebranding as WB Games Boston.

Acquired in 2010, the studio is now fully integrated into the Warner Bros. Interactive Entertainment portfolio and a leading developer of mobile games. The company most recently relocated to an all-new studio space to house its growing talent and also acquired The Tap Lab, a Boston-based mobile gaming studio, in 2017. The Boston studio has more than 100 people on the game and 150 people altogether. 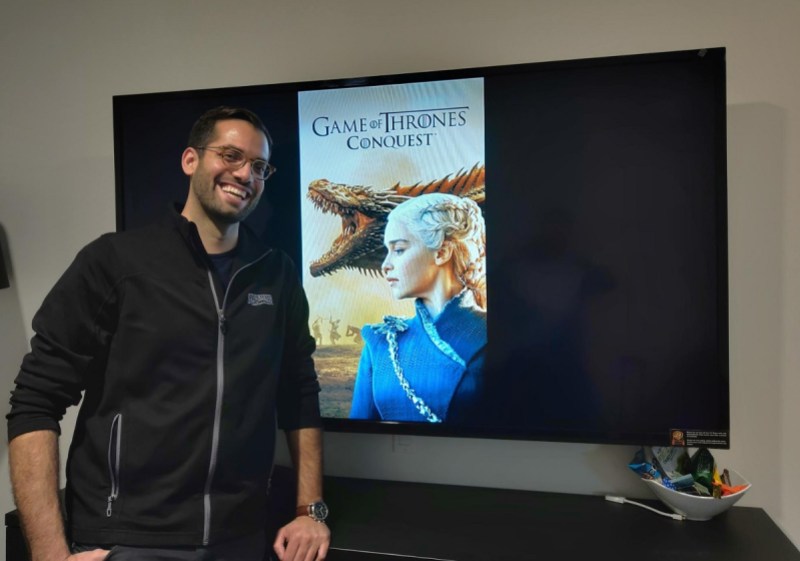 Above: David Bisceglia of WB Games Boston has worked on Game of Thrones: Conquest.

“We hired a lot of talent to work on the game and brought in The Tap Lab to help with the mobile gaming talent,” said Tom Casey, vice president and studio head at WB Games Boston. “While this is different for Turbine people, it is a deep and rich experience, and that’s what they were known for.”

“It’s not easy breaking into the top 50,” Haddad said. “There are incumbents on that list. The good news is if you do, and you manage them well as live games as a service, they to be extremely durable businesses.”

Above: Game of Thrones: Conquest is getting dragons.

Arriving on the first anniversary of the title’s release, the dragons update will introduce a  new strategic element to gameplay in Game of Thrones: Conquest, said Dave Biscelgia, founder of Tap Lab. Now the players can nurture their dragons and grow them from hatchlings to adolescents.

He showed me a demo of the effects that dragons will have on strategy, making it both easier to attack and defend cities in Westeros. Bisceglia said the marketing team has teased the dragons by showing dragon shadows flying over various parts of the map.

“This is the most exciting thing since launch,” Bisceglia said. “Every player will have a dragon. It’s like a super weapon that taps into all the key parts of the game.”

Above: There be dragons in Game of Thrones: Conquest.

The players can start by building a Dragon Pit to hatch their very own Dragon Egg, raising the newborn hatchling to a whelp, adolescent, and eventually to a fully grown adult in upcoming releases.

Players will also be able to unlock access to specialized research, combat, and talent options to train their newest ally for battle. Players battle across the Seven Kingdoms and vie for 130 Seats of Power, from King’s Landing to Winterfell. This is the kind of thing that keeps players coming back, and there are more than 400,000 Allegiances (or alliances of 130 or so players) in the game across 200 kingdoms.

“Game of Thrones fans around the world know the impact dragons have on the balance of power in Westeros,” said Jeff Peters, vice president of global licensing at HBO, in a statement. “We’re looking forward to seeing the same dynamic play out inside the world of Game Of Thrones: Conquest when players can add a fire-breathing friend to their armies.”

Bisceglia said that the company will work closely with HBO to introduce new updates when the next season of Game of Thrones airs on HBO, presumably in the first half of 2019.

As for the future of mobile, Casey said, “It’s a really interesting time for mobile. There are so many types of genres and types of game players. Our goal is to get players to play games for years and years, and we are carrying a lot of our historical experience with deep and rich MMOs. We foresee many years of working on this game.”