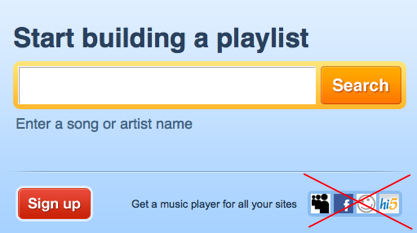 Major music labels, including Warner, EMI and Universal Music Group, have been in litigation against online music company Project Playlist since this spring. They accuse the startup of not honoring its pledge to keep copyright-infringing music off its service. The latest twist: Today, MySpace has temporarily removed Project Playlist widgets from the site. The reason, sources close to MySpace say, is pressure from the labels.

Project Playlist claims to have more than 38 million fans. It lets users find and share music through widgets on MySpace and other social networks, including an application on Facebook (still currently available). From my understanding, MySpace is the startup’s single largest audience; the Facebook app only has 660,00 monthly active users, for example. Of course, the social networking site has a joint venture with the record labels to offer its own music-sharing service, MySpace Music. It has no choice but to honor labels’ requests; normally, it lets third-party music companies function on the site. Others, like imeem, have worked out separate deals with labels in order to avoid this sort of situation.

The music industry separately said it would stop suing music listeners themselves, instead working with their internet service providers to stop them from doing illegal downloads. Clearly, its efforts to fight music startups has not abated.

There’s a strange angle to this situation: Owen Van Natta recently left his executive job at Facebook to become chief executive of Project Playlist, after apparently turning down an offer to run MySpace Music.

MySpace is an open platform that welcomes all developers to build rich and legitimate applications for its global community. We take copyright issues very seriously and our goal is to help developers build a substantial business by creating an environment that respects rights holders and protects their content.

MySpace has received notices of infringement about Project Playlist at different times from several of the major music companies currently suing Project Playlist. Per our policy of taking very seriously the requests of rights holders to block access to third party sites that are believed to be infringing, we have evaluated the requests of the major music companies and determined that it is in our best interest not to allow Project Playlist widgets on MySpace, and effective immediately, we will no longer be allowing these widgets within the MySpace platform. Any third party widgets (including any music widgets) are welcome on MySpace so long as they do not include infringing content—we encourage our users to utilize the many legitimate applications found on MySpace and across the Web.