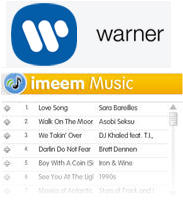 Now imeem users can make playlists with Warner music. Warner, in return, will get a piece of imeem’s ad revenue.

So music from Depeche Mode, a Warner artist, can be played freely, for example. Press the play button on the widget below, for example, which we’ve just pulled from imeem.

This partnership is significant because it is the first time a major label has offered free ad-supported access to it entire catalog of music and video to such an online sharing site. It is also remarkable because Warner (along with other labels) had sued imeem less than two months ago for copyright infringement (our coverage; scroll down). See suit here.

Imeem has grown rapidly over the past year, bosting 16 million active users. Earlier this year, it arranged to pay a share of ad revenue to music content owners, as we reported here. It recently offered free ad-supported streaming of music from other labels, but not from the majors. Competitors such as SeeqPod (our coverage) haven’t cut such deals.