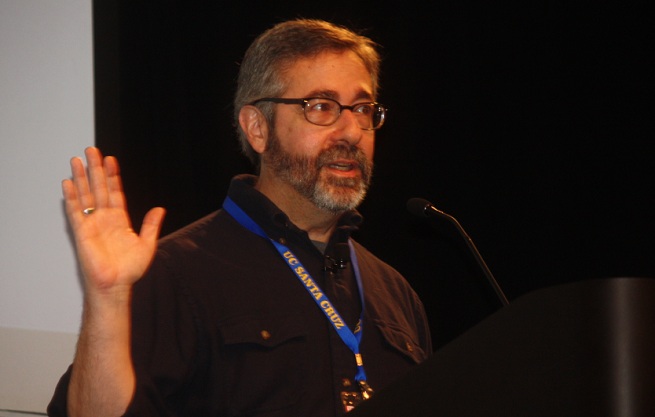 MOUNTAIN VIEW, Calif. — Noted game developer Warren Spector has a long list of things that game designers can do to improve storytelling in video games. But one of those the force behind Deus Ex and Epic Mickey wants is to improve the quality of non-combat artificial intelligence characters.

These computer-controlled characters are just too dumb, especially in comparison to the more refined and flexible combat A.I. characters that try to kill you as the player. Once the non-combat characters are fixed, game designers will be able to make big leaps toward better stories in games, and that could lead to a wider audience — and a less bored community of hardcore gamers.

Spector spoke at an interactive storytelling conference at the Computer History Museum. The event was sponsored by the Center for Games and Playable Media at the University of California at Santa Cruz. The aim is to guide the next generation of video game creators. Spector’s annoyance with non-combat AI is a pet peeve.

“Can we please start working on non-combat A.I.?” he said in his keynote speech. “We spend all of our cycles in each new hardware generation to create graphics people expect. But how do we make characters act better?”

If you’re a male character and you walk into the women’s bathroom, the characters around you should be smart enough to react to that. If you spill a drink, and it splashes on another character, that character should react, Spector said. More difficult still are tasks like creating A.I. characters who act like spurned lovers or would-be lovers. (The AI experts are working on this).

Creating better stories in games might seem like a solved problem, given the success of titles like Heavy Rain, The Walking Dead, and BioShock Infinite. These have been huge commercial successes.

“If that was enough, I would not be here wasting your time,” he said.

But these are still the exceptions. Spector spent most of his time talking about what game designers can learn from other media such as movies, TV shows, comic books, and tabletop role-playing games — and how they should avoid the pitfalls of those media and truly exploit what is unique and different about video games.

Borrowing from other media has its dangers. He said that cinematic games remove the control of the story from the player and place it in the hands of the game designer. Sometimes it works, like in Heavy Rain, but often it bores the player and fails to exploit one of the advantages of video games: the notion that every player can create or experience their own version of the story.

“When you [as gamer designer] take control of the story, you remove control from the player,” he said.

He noted that David Cage’s Heavy Rain had enough story in it for the equivalent of five movies. Games tend to have six or more hours of game play, requiring a lot more story material than two-hour movies.

Games depart from movies in offering players choices. They can branch in different directions and deliver consequences for the choices. Players can learn a lot about themselves that way.

“Games offer the chance for players to find themselves,” Spector said. “Why would we deny them that? I tell designers is your job is to get yourselves off the stage so players can get on it.”

Spector recently stirred a controversy when he said that there was no need for Bethesda to create another first-person shooter game based on Wolfenstein. He didn’t repeat that notion, and in fact he clarified those remarks later.

But he said, “I am saying there is more we can do. Janet Murray observes that games include more building blocks of storytelling than any single medium has ever offered us. How can we not use it?”

Here’s some of Spector’s other suggestions for improving storytelling:

To inspire game designers, Spector said, “We are living through the birth of a new form of storytelling,” quoting Jonathan Gottschall, a literary scholar.

“Video games have been around for 40 years, but you have a chance to drive it and change it as a medium,” Spector said. “That chance comes along once or twice a century.”