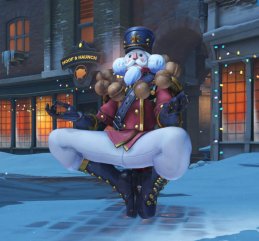 Above: Now when the mean people in Overwatch chat call me a nut juggler for killing them as Zenyatta, it’ll make sense.

The Winter Wonderland is live in Overwatch. This event brings the holidays to Blizzard’s class-based team shooter. Certain levels now feature snow banks and festive decorations. Select characters also have new holiday-themed skins. I particularly like Mei’s Santa-like suit and Zenyatta as The Nutcracker. But alongside the new skins and wintery versions of the King’s Row level, Blizzard has also introduced fresh Arcade modes that also take on the Winter Wonderland spirit.

The big new mode is a 6-on-6 battle called Mei’s Snowball Offensive. In this, everyone plays as the cold-loving scientist Mei, but instead of using her typical freeze gun and icicle attacks, you get a single snowball.

Your goal is to eliminate the other time by hitting them with a snowball. If you fire, you can replenish your ammo by finding piles of snow to pack together another one. You also can’t put a lot of mustard on your snowball toss, so you’ll have to lead your targets — especially when they’re at a distance. If you build up your ultimate attack, however, you get an unlimited number of snowballs for a short amount of time.

The result of this mode is an intense (but silly) fight where winning often comes down to who gets to a pile of snow first. You can check out a demonstration of me playing a match in the video above.