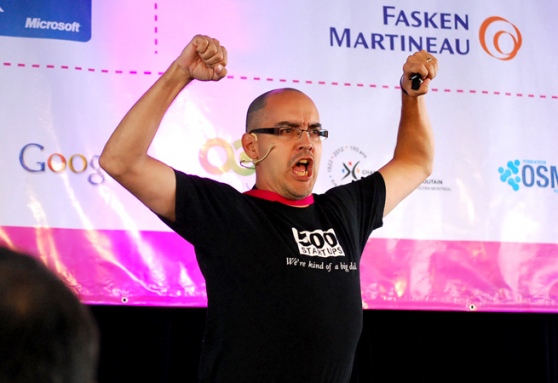 Mexican.VC, a startup accelerator based in Mexico City, announced today it is merging with 500 Startups to source and fund a growing number of promising Spanish-speaking startups.

The two programs have been working together for some time, but only on an informal and sporadic basis. Today, Mexican.VC’s founding partners César Salazar and Santiago Zavala will be joining 500 Startups full-time.

Mountain View-based 500 Startups was founded by McClure in 2010. If you’re not familiar, it’s an early-stage seed fund and incubator program that has invested in wildly successful startups like Wildfire, Twilio, SendGrid, and TaskRabbit. Read here about 500 Startups’ most recent investments.

Venture capital firms and accelerator programs are constantly looking to expand to emerging markets. In an interview with VentureBeat, Salazar said Mexico is on the brink of explosive growth. “The Latin American market is underserved and overlooked,” he said.

Salazar points to statistics, including recent statistics cited in Forbes that Mexico is the 12th largest economy in the world. Mexico’s GDP last year was $1.65 trillion, up from $1.59 trillion in 2010 and $1.51 trillion in 2009.

Salazar and the other partners at Mexican.VC typically invite around 30 entrepreneurs per year to move to the capital to work with them for four months. Now, with the partnership formalized, companies have the option to raise funds in Mexico or in Silicon Valley.

“This is the biggest thing we are doing to expand our international focus,” said 500 Startups’ partner Christine Tsai.

We’ll see more startups in the firm’s next batch geared toward the Hispanic market.

In Mexico City, the partners will be on the hunt for 5 to 10 early-stage companies with a focus on mobile, consumer internet, and small business software-as-a-service. Salazar said that this year, they will be looking for startups with an eye for customer acquisition and marketing, which will appeal to investors in the U.S.

“In Mexico, the idea of a scalable startup is something really new,” said Salazar. “It’s been growing really fast.” In Mexico City, you’ll detect some of the telltale signs of a burgeoning startup culture, including a Women 2.0 chapter and regional office for Startup Weekend.