During a session at Build 2017, Microsoft shared more details about Windows 10 on ARM. Not only will it support Universal Windows Platform (UWP) apps and Win32 apps in the Windows Store, it will also support existing Win32 apps.

Microsoft first revealed that it will allow Windows desktop apps to run on mobile ARM processors back in December 2016, but the company did not disclose a timeframe for when to expect such devices. Last month, Qualcomm shared that the first ARM laptops running Windows 10 won’t arrive until Q4 2017.

“For the first time ever, our customers will be able to experience the Windows they know with all the apps and peripherals they require, on a mobile, power efficient, always-connected cellular PC,” the session’s description reads. Watch Hari Pulapaka, Microsoft’s lead program manager in the Windows Core Kernel Platform Group, take it away:

Pulapaka shows how well the x86 on ARM emulation layer works. In the video, you can see Edge and other first-party apps running without a hitch. Pulapaka then goes even further by downloading, installing, and running the x86 version of 7zip. The promise is “very close to native” performance, truly an impressive feat.

This is possible because the emulator leverages the Windows on Windows (WOW) layer, the same one used to run x86 apps on 64-bit processors. But the real magic happens with Compiled Hybrid Portable Executable files, which are generated from ARM64 code. 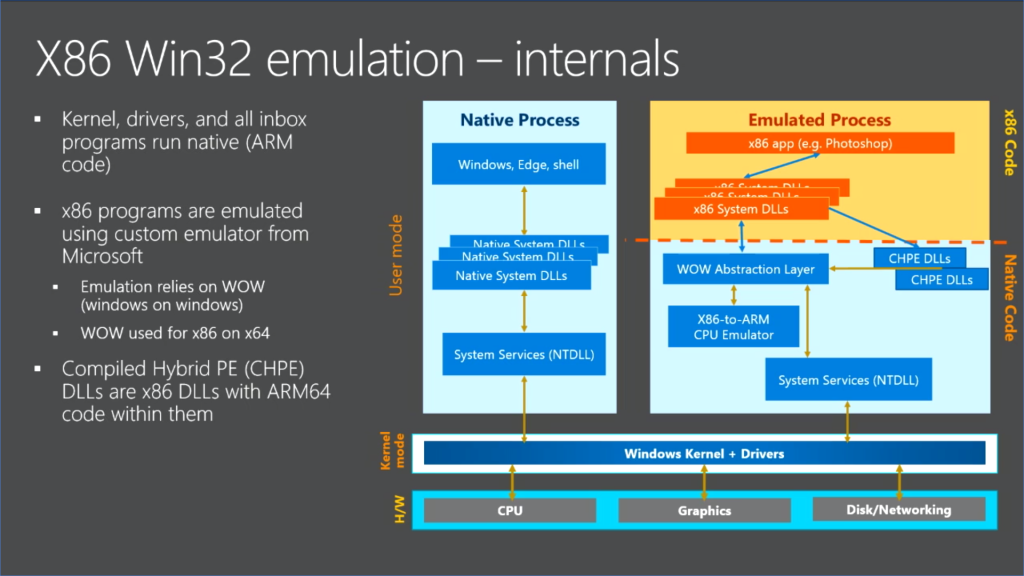 The whole process is seamless, meaning users will not have to do anything to run Win32 apps on devices with Snapdragon chips. In fact, it’s very likely that most people won’t even know the difference: Whether they buy a computer powered by an Intel, AMD, or Qualcomm processor, everything should largely work the same.

Compare this to Windows 10 S, which only allows users to install and run apps from the Windows Store, and it’s clear which types of devices will have the better experience. You may not be able to play demanding PC games on your ARM computer, but everything from casual games to complex software will apparently work just fine.