The drying of the western U.S. and recent news that California is in its second year of a drought has notched up the urgency of water issues. One potential solution is desalination, but such systems have long been considered pricey energy hogs. That’s fine for oil rich countries near the sea like those in the Middle East, but elsewhere it has been a major impediment.

The economics of desalination are changing, but remain difficult for most municipalities. One plant under construction in Carlsbad, California expects to pay $1.10 in electricity to produce 1,000 gallons of water, down from $2.10 at the mothballed Santa Barbara plant. According to Meng Lean, manager of microfluidic systems at the Palo Alto Research Center (PARC), the energy cost of desalination runs at about eight times that of conventional water, with the most efficient plants requiring 15 watts per gallon, per hour. 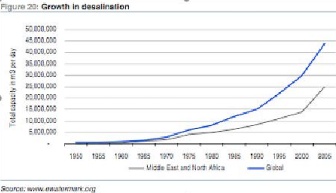 A little known fact, however, is that desalination technology costs have fallen by as much as 80 percent over the past few years, by some estimates. Couple that stat with the total global desalination capacity growth of more than 47 percent over the past five years, according to a recent Credit Suisse investment report, and all of a sudden, desal looks a bit more attractive.

One company benefiting from the good news is Energy Recovery, a little known startup in San Leandro, Calif., considering an IPO. The company has to date taken only $9.5 million from private investors.

Energy Recovery has a pre-water treatment technology for desalination systems that has significant advantages over current technology. The company’s unique PX Pressure Exchanger uses the principle of positive displacement and isobaric chambers. The configuration can achieve a highly efficient energy transfer from a high-pressure brine waste stream in a reverse osmosis desalination unit, to a low-pressure incoming feed stream.

Energy Recovery claims its PX system is 98 percent efficient, which means that very little energy is lost in the transfer. “It changes the economics by quite a lot,” says a company official. That’s because the energy in a seawater desalination plant accounts for roughly 50 to 75 percent of systems return on investment.

Another promising technology in the world of desalination systems is innovative membrane technology. “Nano-engineered membranes are probably one of the most promising technologies out there,” says PARC’s Lean. These ultra thin nano-membranes from startups like NanoH20 in Los Angeles and Aqua Via in Hayward, Calif. are still in their early days of testing and will take several years before they’re ready to scale up to large deployments.

Lean says PARC researchers have also been working on membrane-less filtration systems that have a very low energy cost of roughly .11 watts per gallon per hour. This system, called the spiral concentrator, could eventually be used in pre-treatment for desalination systems, he adds.

As with gasoline, there’s the potential that water costs in the United States, which average $2.50 per thousand gallons, will rise to something closer to the standard European price of three to five times more. Between shortages and rising prices, it looks like a big opening is appearing for new desal technologies.