Watercooler has developed big fan communities on Facebook for sports and entertainment, with 26 million users across Facebook and six other social networks. About 85 percent of the users are members of social networking fan sites, which are monetized through advertising. But social games, monetized through virtual goods transactions, are starting to generate a lot more interest, said Kevin Chou, chief executive of Watercooler. 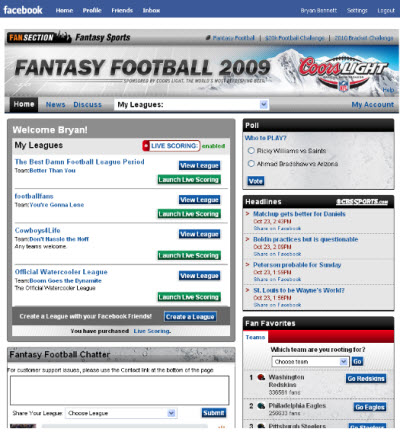 The round was led by Betfair, which runs a legal online gambling business for betting on horse races. Existing investor Canaan Partners also participated. The deal shows that the action in social games isn’t about the three fastest-growing companies: Zynga, Playdom and Playfish.

Mountain View, Calif.-based Watercooler is developing fan communities and social games. Its biggest game is a March Madness basketball game on Facebook, dubbed 2009 Bracket Challenge. That game had more than 1.7 million players. Watercooler plans to expand its presence in sports and entertainment-related social games. It also makes fantasy sports games, where players can pick teams with real-world sports athletes and view their stats.

While Watercooler’s games haven’t taken off the way Zynga’s have, Chou said the future looks promising. He said Betfair is a strategic investor and its advice in overseas sports markets will be particularly valuable.

Watercooler will use the round to fund further development of fantasy sports and social games on Facebook and other platforms. The company recently launched FanSection Fantasy Football 2009, a commissioner-style fantasy football game available on Facebook. The company has 25 employees and was started in 2007. To date, it has raised $9.5 million.

At some point, Watercooler will have to look out for competition from Electronic Arts and Take-Two Interactive, the biggest makers of sports games on game consoles. But Watercooler also faces competition from Premier League, Citizen Sports, One Season and Fantasy Mobile.

The deal also shows that Betfair, which has 1,600 employees, is still focused on a U.S. expansion. Earlier this year, it bought TV Games Network, an American cable channel dedicated to horse racing. Gerard Cunningham, head of the U.S. unit of Betfair, said in an interveiw that the company looked at a lot of fantasy sports companies before investing in Watercooler. He said the company wants to get into Facebook, a fast-growing part of the market. Gambling is illegal on Facebook, but the investment in Watercooler is one way for Betfair to participate in the social network.