Nobody really knows how much social networks applications are worth, which leads some people to think that they’re not worth much of anything. But try telling that to the companies that are building businesses through applications, and they’ll laugh at you as they continue on their way to the bank.

The social network application market only started around 11 months ago with the launch of Facebook’s developer platform, and has produced a wave of companies whose impact is being felt across traditional media.

Latest example: Watercooler, a Mountain View, Calif. company that offers more than 700 applications based on the idea that lots of people want to talk about their favorite sports teams and events or television shows within social networks. It creates an individual application for a team or show. The application includes a forum, a feature for leaving photos, a user ranking system, quizzes, community moderators, and other features designed to encourage lots of interaction. 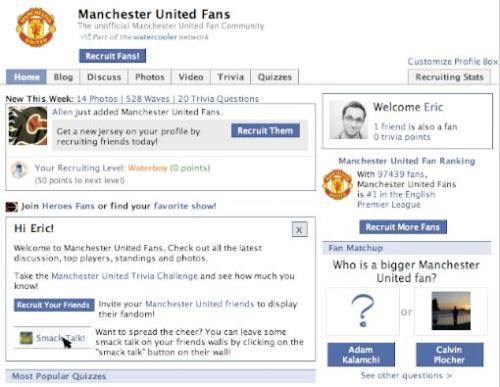 So far, the company says it has 20 million total users, with more than 18 million of them on Facebook. Its method of growth is based on real-world connections between, say, sports fans. Your friend on Facebook is a fan of Manchester United, and so are you (or not) — they add the Watercooler ManU application and invite you to argue talk with them (see above and below). 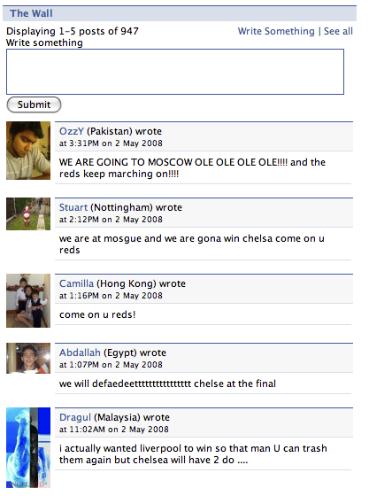 Sports fans and TV show fans are passionate, and the more passionate Watercooler can get them, the more time they’ll stay on its applications. For example, its apps also let you talk to fans of rival teams within a group forum. This, as Inside Facebook blogger and Watercooler employee Justin Smith says, is an opportunity for fans to express themselves and do community buildling. Translation: It’s an online dogfight between rabid fans, and a way to breed engagement.

Watercooler gets about 2,000 new posts, more than 5,000 trivia quiz questions answered and more than 1,500 new notes from fans every day. Think of Watercooler as a competitor of sorts to anything from ESPN.com to startup sports site like Yardbarker.

Watercooler is one of a crop of companies finding business on social networks through focusing on a specific category or two. Other notables are iLike for music, Flixster for movies, and Zynga and Social Gaming Network for casual games. All of these companies focus on people who like a certain form of entertainment, rather than trying to build wide-reaching but simpler applications like the stereotypical “throwing sheep” messaging applications by the largest app companies, Slide and RockYou. As you can see from this graph, Watercooler has done a good job of nailing both the sports and television categories: 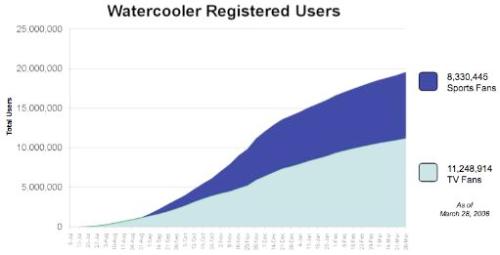 Yes, this is valuable

Watercooler’s many applications give it immediate access to sports and TV show fans across social networks. This makes it an important new channel for the sports teams and television shows themselves to reach fans. And this is where the money is.

Ads on Watercooler are a new extension of ad campaigns in other media, including television and billboards, that target fans of sports teams or shows — demographic information that brands and advertisers already have through decades of sports and television advertising experience. For a sports application, think of ads for athletic apparel ads, sports drinks and the other types of commercials you’d see when watching a sports game on TV.

While the company is spending money to expand, it’s been hitting profitability intermittently for months, chief executive Kevin Chou tells me. It has been running brand advertising since it partnered with ad seller Federated Media last November, and it has more recently hired a seasoned sales executive to build its relationships with brands and their ad agencies. In total, it has already run 19 ad campaigns that were entertainment related, and 15 that were sports related.

It’s also working on some other interesting ways of making money. One is media partnerships, where the application would feature syndicated videos and merchandize licensed through teams or leagues, which Watercooler estimates to be a $10.5 billion market. Another is selling actual tickets to sporting events and shows, which the company estimates is worth $11.7 billion. This is especially valuable for teams that have a hard time selling out, who are searching for ways to reach more fans. (More stats here).

If iLike’s success in promoting concerts and in selling tickets through its music applications is any indication, then these non-advertising revenue streams are also quite promising.

Keep in mind that Watercooler is an integrated network of many small applications, and its breadth of applications within sports and entertainment across social networks mean that it’s not dependent on the popularity of any one team, sport or show — or social network user base.

The company has its applications on five social networks, including MySpace, Bebo, Friendster and hi5, all of which have launched in the past half a year or so. Watercooler’s second-largest user base is on Friendster, which launched its platform last fall, with around 1.5 million total users, almost all of whom are based outside of the US. (Note: Friendster is the fastest growing social network in the world, according to comScore. Thanks, socialmediaguru). Bebo, which launched its platform last December, has delivered only 128,851 total users. MySpace and hi5 are far smaller because they both just launched their platforms within the last month or so. But check out this graph of Watercooler’s growth so far on MySpace versus its growth during the early days of Facebook’s platform. 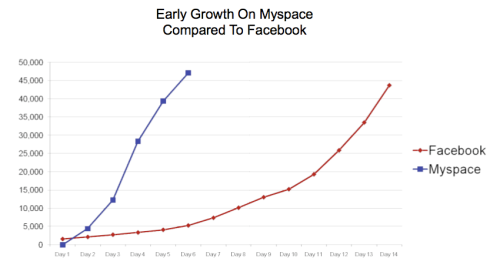 Here’s part of the reason why. Watercooler immediately posts a user’s comment from within, say, Facebook to Watercooler’s new MySpace application. This technique means that as the other social networks copied Facebook and launched their own social networks over the last half a year, Watercooler has stepped in with apps populated with comments and other content created by its Facebook users.

But the company isn’t just sticking with social networks. It eventually plans to launch free-standing sites for teams, that integrate its applications. It also wants to offer widgets, simpler forms of applications, on other web sites. Chou points out that Google, Yahoo and other large companies are also beginning to offer third parties access to their own web properties, and his company is looking at how to take advantage of that.

Watercooler raised $4 million from Canaan Partners last year. Chou was an associate at Canaan before starting the company, and the firm also provided him with its angel round.