Finally unveiled after years of development under the codename “Walkabout,” Google Wave combines popular features from across the web — feeds, shared documents, photo galleries, etc. — to redefine online communication. At least that’s the goal. Its creators, Lars and Jens Rasmussen (the braintrust behind Google Maps), even say they set out to break down traditional modes of communication — email and instant messaging — to find a system more in sync with how web users prefer to talk today. The result looks promising.

At a basic level, Wave is part chat room, part collaborative document. You and your friends belong to a page that any of you can add information to, and it will show up for everyone in real time. And this information comes in many different forms: images, videos, links, comments, event invitations, polls, blog entries, and the like. It’s an ongoing conversation — with rich content. 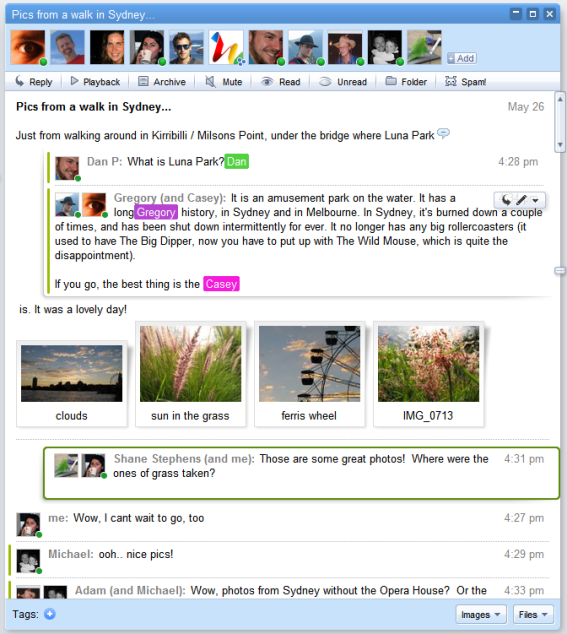 – You can add any number of users to a wave, just like inviting friends to your Gchat list.

– You can simply drag and drop files (photos, docs, etc.) to add them to your Wave

– You can stream in your feeds, including Twitter and FriendFeed (a company that’s probably not having the best day).

– You can reply to or comment on anything another member has posted to the Wave.

– You can type at the same time as anyone else on your Wave, and your messages will show up in real time almost character by character (though you can toggle it to show messages only after you press done, like an IM).

– You can rewind and play back your Wave conversation to see how it evolved at any point.

– Wave is open source, allowing third-party developers to play with and extend the product (something Google is encouraging before its public launch).

– You can export an edited wave as a new wave and start over if it gets too confusing.

– You can make some parts of a conversation viewable by a select group, or entirely private.

– You can embed your Waves in other places — your blog, your web site, etc. 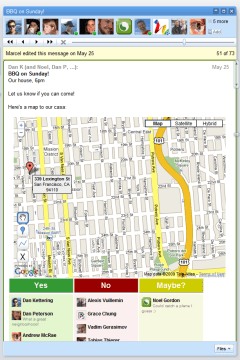 – The open API allows developers to easily build new features into Wave — one example is Polly, a tool that lets you add polls to a wave. This also functions as an RSVP feature, negating the need for sites like eVite.

– Another extension, Bloggy, lets you start a Wave with a blog post, that readers can then respond to in a variety of ways.

– You can play interactive games in the sidebar of your Wave, like chess (an incarnation of Scrabble is sure to follow if it hasn’t already).

– Wave has workable versions for Android and the iPhone.

This list already seems impressive, but there’s a reason Google chose to unveil the product at its developer conference: There’s still a long way to go. Right now, Wave resembles a bunch of services that already exist on the web, from Twitter to FriendFeed to Facebook. Putting them all in one place is a breakthrough in itself, but for truly radical innovation, it’s a masterful idea to tap into third-party enthusiasm. It will be interesting to see how different the product looks by launch time.

Here’s an explanation of the concept behind Wave via the Google YouTube channel: