Google subsidiary Waymo earlier this year announced a strategic partnership with Jaguar Land Rover to develop autonomous versions of the automaker’s Jaguar I-Pace SUVs, and today, it took the wraps off the fruits of its labor: new all-electric crossovers that’ll join the company’s self-driving fleet by 2020.

The new utility vehicles aren’t operating autonomously just yet — they lack the requisite hardware and software — but will drive around the Bay Area and collect vehicle performance data to develop design requirements and durability tests.

In March, Waymo and Jaguar Land Rover said they would build up to 20,000 self-driving electric SUVs that’d hit the road by the end of 2018. The SUVs would be designed from the ground up by engineers from both companies, they said, and serve as many as one million trips a day in the coming months.

Waymo’s current self-driving fleet consists of 600 Chrysler Pacifica minivans, built in a facility in Michigan co-staffed by Fiat Chrysler Automobiles and Waymo. In May, it inked a deal with Fiat Chrysler that will see an additional 62,000 minivans deployed as robot taxis, and said that it had begun discussions with the automaker about how it will eventually sell self-driving cars to consumers. 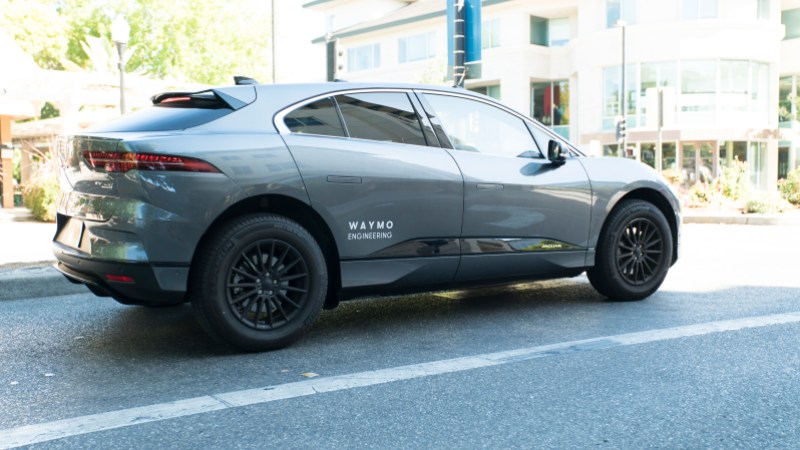 Above: Waymo’s Jaguar I-Paces from a different angle.

Waymo has tested autonomous vehicles in more than 25 cities across the U.S., including Atlanta and San Francisco, and plans to launch a commercial ride-hailing service in Phoenix, Arizona later this year. In November, it began test-driving cars on public roads in Arizona without a human driver at the wheel, and more recently, it invited members of its Early Rider program in the greater Phoenix metropolitan area to ride in its driverless cars.

Over the past nine years, its autonomous vehicles have driven seven million road miles and five million simulated miles.

Jaguar Land Rover, for its part, has shown an eagerness to invest in self-driving tech. In June, it committed $25 million to Lyft’s autonomous car effort, and is testing its own self-driving prototype vehicles near its Whitley, Coventry headquarters.