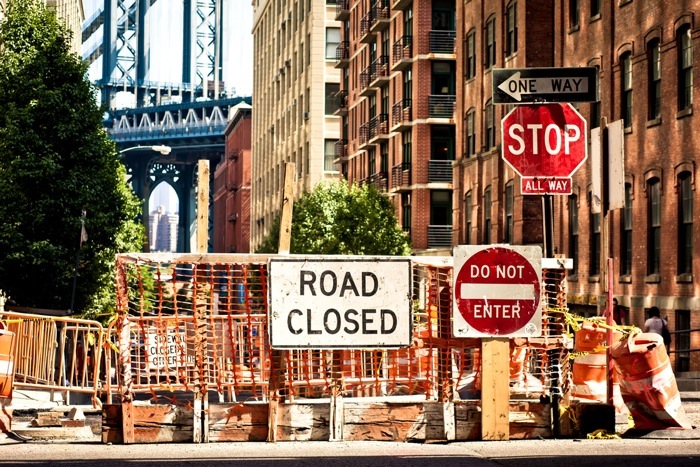 What if you could instantly change car navigation maps for other drivers whenever you encountered a closed road?

That’s the idea behind the social driving app Waze’s newest feature, which you specifically use to report road closures in real time, alerting other Waze users in the process.

The feature is a natural extension of what has made Waze essential for almost 40 million iPhone and Android users. The free app’s claim to fame how it reports traffic jams and other road hazards as you encounter them. Now with this new road closure feature, you’ll be able to directly affect Waze’s maps, which will then instantly reroute other drivers in your area.

You could call what Waze is doing “Smart GPS,” compared to the less-connected GPS offerings in cars and from companies like Garmin and TomTom. 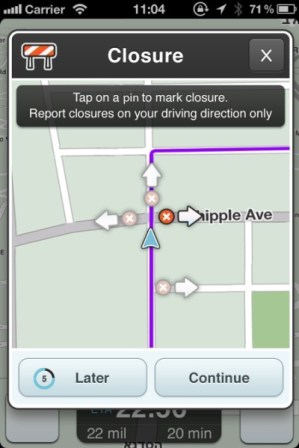 “The one thing that nobody is crowdsourcing in the map space is real-time road closures, because it needs so many different things,” said Di-Ann Eisnor, Waze’s vice president of platform, in an interview with VentureBeat. “Things like a ticker tape parade after a sports team has won, a construction project that cities can’t keep track of, and roads closed due to snow. … Our roads are changing all the time, and Waze has been building the capability to take care of that.”

Eisnor tells me the company was inspired to offer the feature after it was tapped by FEMA and the White House to help out in the aftermath of Hurricane Sandy. Drivers were able to use Waze’s app to locate open gas stations (at the time, there was a gas shortage and many stations didn’t have power, which made it difficult to find gas). FEMA also took advantage of the data to determine where it routed fuel.

For Waze users, reporting a closed road is just as simple as reporting a traffic jam with the app. You just need to choose the reason behind the closure as well as its length (which you can often get from signage or police corralling traffic).

Behind the scenes, the road closure feature required some significant changes for the company. Waze previously relied on a standard amount of timing for issues like traffic jams, but closed roads can often last for several hours or days. The company had to integrate new messaging for its users as well as checks and balances to determine that a road was actually open.

At this point, Waze seems perfectly positioned to help cities learn more about the state of their roads. Eisnor said the company just closed a deal with Georgia’s Department of Transportation, which would give that state access to the company’s data. Waze is currently chatting with the transportation departments from other cities, including San Francisco.

“If you look at the three phases around our own community growth, there’s the beginning when we can crowdsource all that [driving] info, then there’s the validity we got that when we helped TV news stations, now we’re getting to a phase where I think we’ve realized as a society that crowdsourcing is that next step,” Eisnor said. “We’re actually going to be able to provide information to cities better than they had before.”