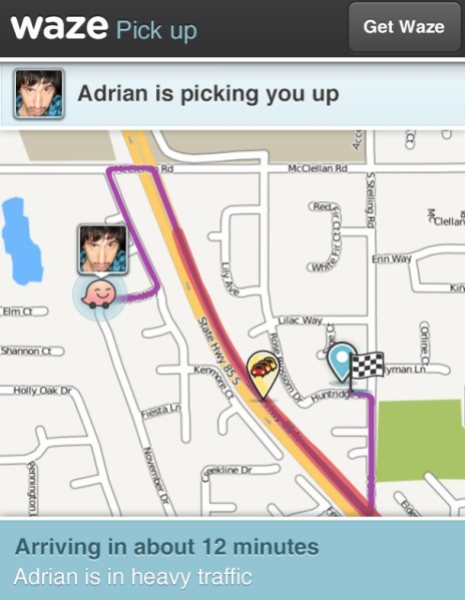 Waze has been on a roll with its free crowdsourced GPS navigation apps, but today the company is getting even more social with an update that could change the way you drive forever.

Waze is launching version 3.5 of its iPhone and Android apps today, which add the ability to share trips with friends, track when friends are reaching your destination, and send pick up requests to friends (even if they aren’t using Waze). The new features are an obvious extension of Waze’s initial goals to make driving more social, and they also make the app more useful to drivers who didn’t have a need for Waze’s original crowdsourced navigation feature. It’s also yet another way for Waze to prove its worth after Apple released its own GPS navigation feature in iOS 6’s Maps app.

“We think a lot about how people are spending time in the car and what it means to be driving socially,” Di-Ann Eisnor, Waze’s vice president of platform, told VentureBeat in an interview. “The time that you’re in the car alone, it’s really just to get to one group of people or another … [we’ve been thinking about] how we can extend that experience.”

Waze says it now has 29 million drivers using its app, up from 26 million last month. The company recently added real-time gas information to its apps to make it easier to find the best gas deal.

Waze commissioned a survey by Omnibus with 1,000 U.S. drivers to get a sense of their driving behaviors, and it revealed that 52 percent of drivers picked up friends and family at least one to five times a month (and 20 percent did that daily). Twenty-eight percent of those polled also regularly picked up their kids, while 23 percent did the same for their spouse. Given that data, it made sense for Waze to focus on making those typical driving experiences easier.

By sharing your trip, your friends or family can easily see your progress as you approach a destination (over-protective parents will surely love this). And if you’re waiting on a large group of friends, the new app lets you see all of them approach you on a single map.

Most intriguing to me is the new pick up request feature, which sends out a text or push notification to the recipient and allows you to easily locate them without the need for an address. If the recipient isn’t using Waze, they’ll still be able to see an HTML5-powered map that tracks your approach.

Eisnor noted that Waze isn’t trying to compete with ridesharing apps like Lyft and Zimride: “If you look at the number of people who are just driving people around and picking people up, it’s a much bigger share of the market than people who are trying to rideshare — that’s more about carpooling. … What we’re doing is trying to make all of your driving more social.”

Other new features in Waze 3.5 include Facebook log-in, the ability to save your parking location, and useful information like toll fees.