On Thursday, Microsoft boasted that its “commercial cloud” annual revenue run rate currently exceeds $10 billion. Some reporters, given little other good news in Microsoft’s latest earnings statement, pointed to that statistic as a bright spot.

The problem is that this cloud figure is abstract; it doesn’t represent actual revenue, and the term “commercial cloud” is frankly nebulous. (For that matter, so is the corporate goal of hitting a $20 billion revenue run rate in 2018.) It refers to more than just Microsoft’s Azure infrastructure-as-a-service (IaaS) public-cloud offering, which includes raw computing, storage, and networking resources, along with managed databases and other tools for developing, testing, and running applications. The “commercial cloud” term also accounts for monthly business subscriptions to Office 365 and Dynamics CRM.

And so there’s no real way to compare Azure on its own to the biggest IaaS cloud: Amazon Web Services (AWS).

Last year, Amazon began disclosing exact revenue and expenditure figures for AWS in its earnings statements. AWS generated $7.88 billion in revenue for Amazon in 2015, and a few weeks ago, Amazon CEO Jeff Bezos told shareholders that AWS is “reaching $10 billion in annual sales” this year. If you want to know when that will happen to Azure, well then good luck, because Microsoft currently won’t tell you.

The same goes for the cloud infrastructure services from IBM and Google.

As for Google, well, Alphabet’s earnings statement released on Thursday didn’t mention cloud once. “We’re really excited about the magnitude of the opportunity,” Alphabet chief financial officer Ruth Porat told analysts on the quarterly earnings call. As usual, she did not provide numbers about the size of Google’s Cloud Platform.

If you want to get a sense of what the market actually looks like, your best bet is the most recent Magic Quadrant report on the IaaS market from technology analysis firm Gartner. AWS had “over 10 times more cloud IaaS compute capacity in use than the aggregate total of the other 14 providers in this Magic Quadrant,” Gartner analysts Lydia Leong, Doug Toombs, and Bob Gill wrote last year. In other words, AWS is likely generating a lot more revenue than the IBM, Google, and Microsoft clouds, quarter after quarter — despite marketing claims that may suggest otherwise.

But until these companies say exactly how much revenue their clouds are bringing in, we really won’t know for sure. 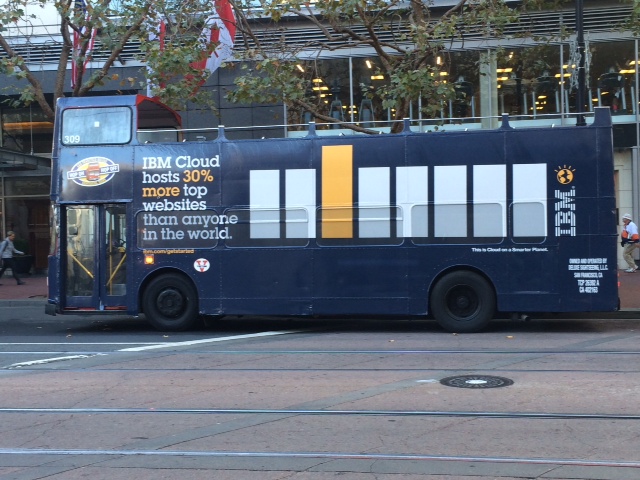 Above: An IBM ad displayed in San Francisco in 2013.