Mike Bell, vice president and general manager of Intel’s New Devices Group, is a wearable kind of guy. He is leading the world’s biggest chip maker into the market for wearable devices, as part of a larger bid to become the technology provider for the Internet of Things, or smart and connected everyday objects.

Bell says that everything is getting smart, and he estimates that the wearables market will hit 400 million units sold a year by 2020, and that is just the personalized part of the 50 billion unit market for Internet of Things devices by 2020.

Intel wants to provide the innards of those wearables, and at the 2015 International CES, the big tech trade show in Las Vegas this week, Intel introduced Curie, a button-sized module that transforms any object into a smart, wearable gadget. The world’s biggest chip maker believes that modules like Curie will make it easy for others, like fashion designers, to turn jewelry, accessories, and clothing into wearable devices.

We caught up with Bell at CES. Here’s our edited transcript of our interview with Bell. 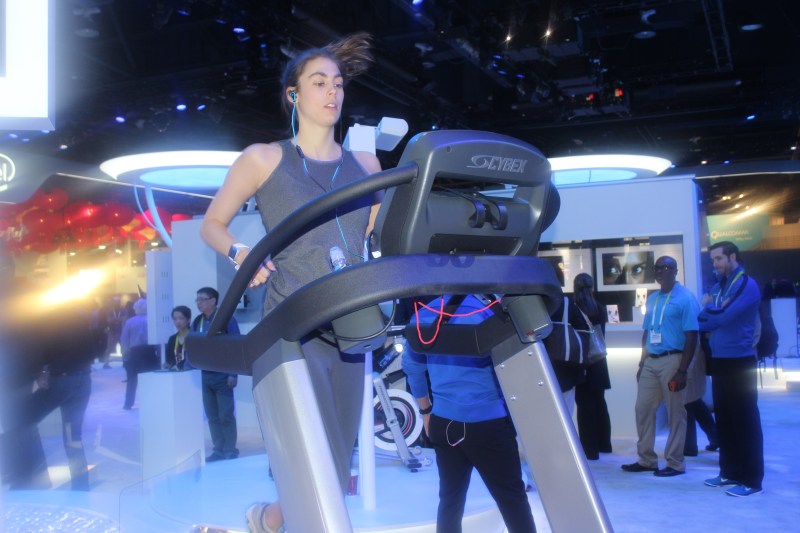 Above: This woman ran 11 miles on her first day at CES 2015, as measured by Intel’s wearables.

GamesBeat: One of our guys went and tried out every single wearable at the Sands. Something like 68 of them.

Mike Bell: Oh, over at Hall C? Wow. I like the smart basketball. I bought one of those. It’s not a wearable, but it’s in the same pavilion. It’s amazing. You shoot the thing and it has all kinds of sensors inside. It tells you whether your arc is right, whether you threw it hard enough. I wish I had one when I was playing.

GamesBeat: It’s amazing if you look at last year.

GamesBeat: What sort of strategy do you guys have with Curie, since you are just one of many different wearable technology providers?

Bell: It’s pretty straightforward. We want to be the chipset inside all of them. We’re trying to show what’s possible, to help get fashion and tech talking together, to seed the market and get it going. Then we’ll be the technology player of choice for anyone building wearables.

GamesBeat: Does that involve a transition, where you make the market possible, and then once everyone else has their stuff going you don’t have to be a system company anymore?

Bell: I don’t think so. It turns out that it’s hard to do a good wearable. I don’t think very many companies have the resources and skill set to do a reliable hardware-software combination. Not only does it have to be bulletproof, but you have to be able to field-upgrade it over the air. You have to have recovery in case that doesn’t work. Just doing the table stakes, the basics to make a wearable, is beyond the capabilities of a lot of people. I give these companies credit for trying, but it’s complicated.

Our position is, we want to help them be successful. We’ll do a lot of the work that everybody would have to do on their own so that they can just add their secret sauce on top and do something cool without having to reinvent what everyone already has to invent.

GamesBeat: I’ve tried the Basis Peak. I haven’t had the greatest luck with it.

Bell: That’s too bad. Obviously I like it because we bought the company, but it’s worked almost flawlessly for me. What did you run into? 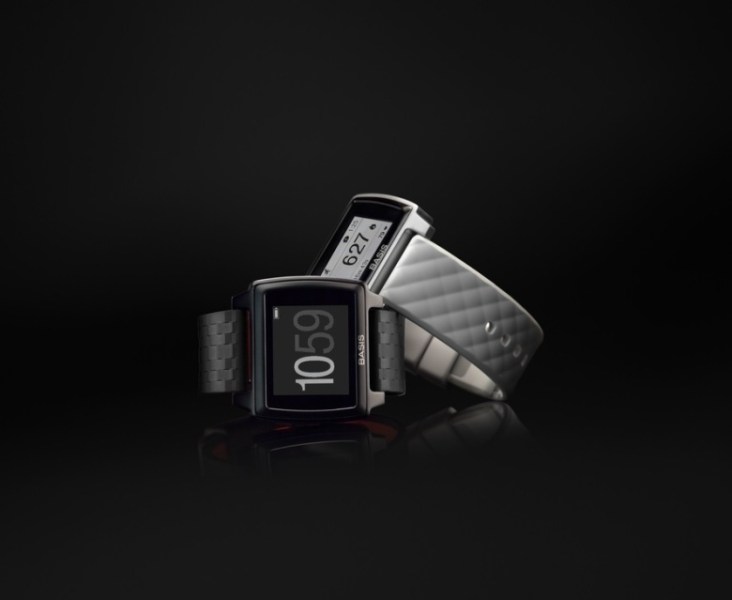 GamesBeat: The early one had a firmware problem for a while. It didn’t recognize the time change to daylight savings. Then the first post-launch model I got had some battery problems. Pairing it with a device was always hard, too, with the iPhone 5S.

Bell: iOS 8, right? Yeah, I don’t know what’s going on there. We need to make it work, so there are no excuses there, but with iOS 8, I have trouble. Almost every Bluetooth device I own loses pairing with the device. It’s driving me crazy.

GamesBeat: When I was trying to restart it, the pairing problem just kept getting in the way. They sent me a second one and that failed too. It reminds me of the old PC days, when you had to work hard to get your computer going. When something went wrong there was no easy way to get a fix. This over-the-air stuff seems like it has a way to go, especially when Bluetooth is the only way to get the stuff in there.

Bell: Working so close to it, it’s possible that I know it too well. “Oh, of course you click on that in iOS 8’s dialogs to make sure it works.” That’s the kind of stuff we have to document and work around. I’ll have the team look into it.

I’m having the same issue with my car. When I get in the car and turn it on it doesn’t automatically reconnect. I have to keep doing the search thing. But they’ll figure it out. As a consumer we have an expectation that everything just works. But having worked with these devices in the past, I can say that the matrix of operating systems, cars, phones, headsets, software, hardware — there’s the Bluetooth spec and then there’s what people actually implement. Nothing out there actually follows the specs. You have to go through and put special cases in for everything. I’m not happy about it, but at the same time I can appreciate the difficulty of making it perfect.

GamesBeat: We might be in a cautionary stage for wearables. I wonder if a lot of them are going to have this same Bluetooth problem.

Bell: Based on the feedback I’ve gotten from our customers, you’re an anomaly. A small number of people have issues, mostly with the 5S and the Bluetooth stack. We’re working on that. For most people it works.

What we see is, there’s the power user — it’s almost like the old Mac versus PC days. As a Mac customer you just wanted it to work. The PC customer was saying, “If I can’t reset the jumpers, it’s not real!” It’s funny. I’m of the belief that this wearable technology will never take off unless it’s a Mac-like experience where it just works. With our MICA bracelet we just showed in New York, you take it out of the box, it’s activated, it works. There’s no going to the AT&T store and getting a plan. It’s a very smooth onboarding experience.

I bought one of every smartwatch in the market as we were playing with this stuff. One of the watches I bought, it took my senior software guy four and a half hours to get it running. These are the early days. People will learn. But we need more of the “it just works” and less of that.

GamesBeat: The watches may win, if only because it’s harder to lose them. I can’t tell you how many headphones I’ve lost.

Bell: Watches are such a personal thing. Half the people out there don’t wear them, and then the people who do, they’re Rolex versus Armani versus this or that. Trying to convince the world that everyone should wear the same digital watch is going to be interesting. That’s why I think fitness trackers are an easier explanation and sell compared to something like a Swiss-army-knife watch that opens your garage door and makes your breakfast. Certainly there’s a market for those, and we’ll help build those. But wearables are as much about the way they look as what they do. Maybe the tech industry hasn’t quite caught on to that as much as it needs to. 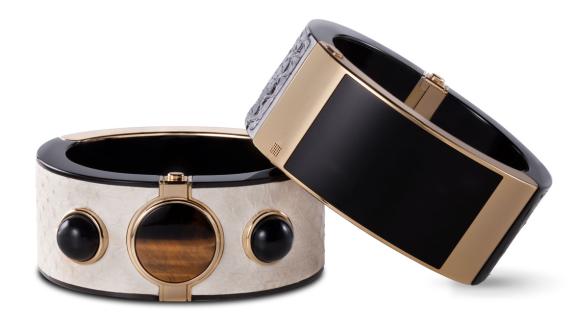 GamesBeat: With Apple coming in, what kind of impact do you expect?

Bell: It’s had a phenomenal impact for us. Eight months ago the pundits were all asking if this market would ever take off. Apple announces a watch and suddenly, overnight, of course the market’s going to happen. Yesterday you were asking if it would ever happen, now you’re sure it’s going to happen, all because Apple showed a picture of something. It’s at least legitimized people saying, “Okay, something is going to happen in this space.” Now we’ll see what shakes out.

GamesBeat: There were some clones already on display here.

Bell: I’m surprised it took this long. If I remember correctly, back in 2007, we announced the iPhone in January, and before it shipped in June there were people out there with things that looked just like it.

GamesBeat: What makes your short list of great outcomes from wearables?

Bell: I love the consumer applications of wearables. I wear this and it tells me how well I’m sleeping. It shows me the impact of my exercise. After a couple of weeks my resting heart rate is lower than it was and my sleep has gone from tossing and turning 27 times a night to only three times a night. You can see the impact of what you’re doing, which is very motivating. Some people exercise and think, “Is this making any difference?” I don’t need to see charts and graphs, but it presents it to me in a way that says I’m making an impact, and so I keep going.

I also think that most people are overlooking the industrial applications of wearables. We’re talking about smartwatches and fitness trackers, which are wonderful, but — we had this Make It Wearable competition. One of the finalists produced a smart glove that’s being shown at a booth downstairs. It helps people in a manufacturing setting do their job correctly and avoid injury. If someone could produce a wearable that took 10 seconds off the assembly of a device, that could potentially be millions of dollars in savings over a year. That’s a no-brainer. Companies would buy that instantly.

Everyone talks about wearables versus IoT. Wearables are a personal IoT as far as I’m concerned. But in any case, I think the industrial uses could be a much bigger market. Companies are willing to pay for productivity and the savings they get from it.

GamesBeat: Some of our writers were rebelling against the “Internet of everything.” They’re trying to make a case that some appliances should stay dumb.

Bell: I’ve had two houses since 1995 completely wired — thermostats, switches, doors, you name it. It’s been interesting to see how the technology has evolved. It went from having to piece it together with a Mac-based program and wiring everything myself and writing my own scripts to ADT and Comcast offering a one-button version of the same thing.

You’re right, though. I don’t know that I need my washing machine to tell me it’s low on detergent when I’m at a work, because I can’t do anything about it anyway. To me it’s the same thing with wearables. Just because you can put something on your body, if there isn’t a reason to put it there, it doesn’t need to be there. I would like my coffee maker to remind me it’s low on beans while I’m at work, though, because then I can pick up beans on the way home. The functionality needs to make sense, in IOT and in wearables.