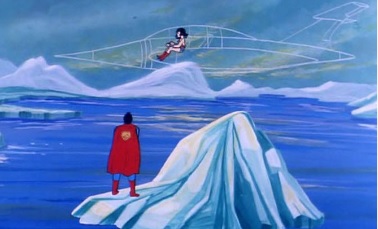 Consider the scene at right from the 1970s Saturday morning cartoon Super Friends: Superman looks up from an iceberg as a seated Wonder Woman rockets across the horizon in her plane rendered invisible. Her invisible jet is her secret advantage, her assistive technology is unbeknownst to anyone who sees her and provides a benefit without a barrier.

Born out of a similar notion of “secret advantage” in the 1960s, MIT professors Edward Thorp and Claude Shannon invented a concealable, cigarette pack-sized computer that increased their odds at the roulette tables in Las Vegas casinos by 44 percent. The first wearable technology was about winning without being conspicuous.

In the 50 years since wearables debuted on the Las Vegas strip, form has largely been informed by fiction and not function. The rugged smartwatches and fitness bands to date reflect a mythic lineage back to Dick Tracy’s two-way radio watch that captured our collective imaginations, but forgotten was the simple invisible machine that helped you win.

Miniaturization should help wearables evolve from conspicuous devices to concealable technology. People will one day easily augment everyday items and even themselves, and in turn, create user-generated products. Awkward heads-up display units might later be realized as smart contact lenses, while connected bracelets move to subcutaneous machines or ingestible sim cards. The “secret advantage” will become the requirement.

In short, the wearables category is still nascent, and we have yet to see a groundswell in adoption. It is currently a market of tech spec one-upmanship. Each device has new or different functionality, but how these devices meet user needs is unclear. One of the most pressing needs is inconspicuous and ideally invisible technology — the benefit without the social barrier.

Today, the wearables category braces for the debut of the Apple Watch, and only time will tell if we are ushering in an Internet of (Useful) Things, or simply more things. As the category continues to mature, can wearables help us tackle real and wicked problems — record levels of depression and anxiety, inefficient governments and institutions?

Brands should remember, it’s about the flying, not the splendor of the plane.

Forest Young is an educator at Yale University and a Creative Director in Interbrand’s New York studio. His work has been exhibited at the MoMA and the Royal Ontario Museum and has won a Gold Design Lion at Cannes. Forest also serves as a board member of the AIGA/NY and is a member of the MoMA R&D Salon. He will be continuing the wearables conversation at SXSW 2015 Interactive with esteemed colleague Gareth Price, Technical Director at Ready Set Rocket.