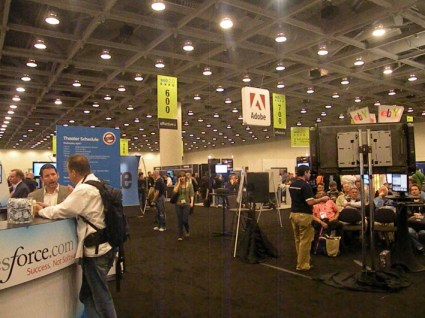 Tim O’Reilly, head of O’Reilly Media, kicked off the Web 2.0 Expo in San Francisco with mixture of optimism about the web’s future and sober recognition of the weak economy.

Under the theme “the power of less,” O’Reilly said that times are tough, but he said he is encouraged that the web is getting smarter and will increasingly be driven by sensors that deliver useful information. He noted, for instance, that a plant can now send you a Twitter message when it needs water. And a new web site can tell you what appliance you just turned on — and how much electricity is using — based on the unique electrical signature of the device, as measured through the electrical grid. 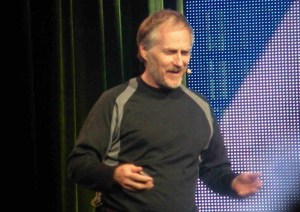 O’Reilly’s tempered tone seems appropriate. The expo floor wasn’t that crowded and the environment at the show seems much different from a year ago, when there were more attendees (somewhere around 8,500). The show folks tell me they expect about 8,000 to attend over the week. There are a few thousand people in the room listening to the keynotes. But clearly there aren’t as many exhibitors, parties or attendees. Last year’s expo was pretty sober, thanks to the collapse of Bear Stearns. But it’s even more sober now.

If the ebullience of Web 2.0 has come to an end, what will take its place? O’Reilly said it would be a bunch of things, including the semantic web, virtual reality, the social web, and the mobile web.

O’Reilly said that he himself is a lot more cautious now because the collapse of the financial system showed that collective intelligence doesn’t always work. It was an epic fail, he said. The lesson when it comes to the web, he said, is that we need to “create more value than we capture.”

Stephen Elop, president of Microsoft’s business division, had a fireside chat with O’Reilly. They meandered over a lot of ground, but there were interesting tidbits. Elop noted that rich applications such as Facebook running on iPhones have become very popular.

The day’s final speaker was Mark Carges, eBay‘s Vice President of Platform and Chief Technology Officer of Marketplaces, who spoke about his company’s platforms for third-party developers — the platform for marketplaces, with its just-announced ability to add applications to the eBay site itself, and the forthcoming PayPal platform. Carges noted that unlike most platforms where the business opportunities may be unclear, there are obvious ways to make money on eBay: “We are set up for you to take a cut, and I hope you will.”