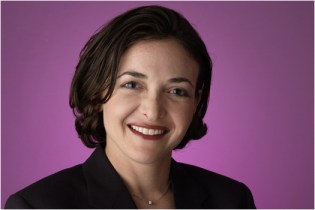 Facebook’s COO Sheryl Sandberg is on-stage at the Web 2.0 Summit in San Francisco. The big news is that Facebook is giving Microsoft a feed of people’s public updates to be incorporated into search results. Sandberg said no money exchanged hands during the deal and that the company is “not trying to make money on data.”

(Sandberg said there’s nothing to announce with Google, which is her former employer.)

Here are notes from her talk:

John Battelle: How did you manage becoming profitable?

Sandberg: The short answer is revenue growth. We have a robust advertising business. We think we are — and the numbers are proving it — making real the promise for what the Internet is doing for advertising. It would no longer be a one-to-many medium where you’d blast your message out.

Brand advertising has been one-to-many, blasting out your message. Our ads are different. Facebook is where you are your authentic self, so advertisers are able to engage with you. You are able to engage with marketers the way you can with friends. We’re ready to announce that we’re not only profitable and cash-flow positive as well.

Battelle: I want to get back to the question of how that breaks out.

Sandberg: We sell through a direct sales force and we sell through an online ad platform that’s now available in 28 languages and 15 currencies. Both explain the increase in revenue.

Battelle: It seems that the referral ecosystem is shifting. We’ve had a stable system where search has been king, distributing the attention of people around the Internet ecosystem. But the referral logs are increasingly Facebook and Twitter and other sharing sites. You must have noticed that while you’re at Google. And now you’re at Facebook. Is there any connection?

Sandberg: There are a shift. How do you get the information that you want to get? Google is going to continue to be important, but its doing it in an anonymous web. The wisdom of the web. We believe in the wisdom of friends. (She gives the example of Where The Wild Things Are and how her son wanted to go. So she asked friends on the web whether it was appropriate to bring her child. And she got more than 18 responses and realized it wasn’t a good movie to take a young child to.)

Battelle: We just saw a company called Aardvark that leverages the Facebook platform to answer questions. How do you manage the tension between developers outside what you want to create in-house?

Sandberg: The platform strategy is really important. We have an open platform, We don’t try to build everything our users want to use. We focus on building the core technology and people develop on top. We have over 1 million developers. People are engaged in Facebook doing things developers build out. We are focused on the core platform. We are indifferent if it’s in a status update or in an outside app. What matters to us is that our technology is at the core of connecting with your friends and that activity.

Battelle: You’re not alone in that ambition. There’s also Google and Twitter. What’s Facebook’s unique proposition compared to what Google or Microsoft might do in terms of competing for being that social graph?

Sandberg: We have to be vigilant and make sure that we’re continuing to iterate and provide the best product. We start from a place where Facebook is where you’re yourself on the web. Facebook’s the only place where you can share something with a few close friends or the whole world. We do this at scale. 300 million people come to Facebook and get an individual news feed. I think in terms of do we, are we the leaders of providing that service? I think there’s no question.

Battelle: Let’s talk about Facebook Connect. I think this crowd understands what it is. Maybe you can give a quick overview. Is Facebook Connect now what it was when it launched? Are their plans to make it more robust?

I would have these meetings. People would tell me they wanted to build a community around a site. They do want to share activity with friends, but they’re not going to go and set up a community on every site. But you can do this with Facebook. That’s what we’re enabling.

Battelle: Are you going to be enabling a lot of the core functionality inside the domain of Facebook, outside?

Sandberg: We want to give people enough technology to enable them to share both on and off Facebook. We continue to iterate and build out that functionality.

Battelle: It looks to the untrained eye like a potential Trojan horse for a monetization service that might also roll out alongside Facebook Connect — it might become an AdSense-like product for the rest of the world.

Sandberg: Not now. We’re focused on building products for users and we look at monetization later. We are focused on monetization. We have a robust ad business that is funding Facebook and Facebook Connect. We want the APIs to be easy to integrate and we want it to be easy for very cool integrations and applications.

Battelle: Are developers asking you for this? How do you ensure there’s a system where developers can get paid?

Sandberg: People who start with Facebook Connect usually have their own business like ABC News or Huffington Post. They’re looking to socially engage. They want more users and less anonymity. When Michael Jackson died, ABC streamed the memorial and what they found was that people were engaging.

Battelle: I’m glad you talked about Zynga. And they’re working with PayPal. Are you looking at building your own payments system?

Sandberg: We do a few things on payments. We have a large ad system. Facebook’s growing internationally and domestically and we needed a way for people to buy ads very efficiently. The second thing we’re doing right now is we have a virtual goods and gift store. You can pay with Facebook credits. We are doing testing with developers where people can use credits to pay for items in apps.

Battelle: When I talked with Ev yesterday, he said he was flattered by some of the Facebook updates that felt a little “Twittery”? Was that a response to Twitter?

Sandberg: Anyone who has worked at Facebook knows that change is in the DNA. It comes from Mark. We think Twitter’s impressive. They’ve built something very important. The world’s moving toward more sharing and more real-time connections. The world now accepts that 140 characters is an acceptable size of information to share. That’s important step in how people are sharing and connecting. There’s room for more than one player in that.

Battelle: The scale is very different in terms of the amount of status updates.

Sandberg: We do 45 million status updates a day from 30 million unique individuals. People want to share. Our challenge and lots of people are working on that is how to do more of that.

Battelle: Has the vision of what Facebook was changed either since before you came and sort of looked at the company and became Mark’s partner?

Sandberg: I don’t think the vision’s changed. I don’t think the vision’s changed since Mark was in his dorm room. The vision is to help people connect. Certainly what we build to enable that changes all the time. We’re committed to continuing that process of change. We want our products to keep evolving. Even as we get to be a bigger company, it’s important for us to iterate and build products rapidly.

Battelle: You don’t have a very Valley background. You were in the Treasury. We’ve had several government-related speakers. Let me ask you this — how do you think about having a conversation with Washington D.C.?

Sandberg: I think and I thought this then that Silicon Valley is an amazing force for our economy. We’re changing the world and we’re building products that are changing people’s lives. Our impact on policy is not as profound. There are industries that understand how important those ties are. The core things that this industry and the core political platform that this place needs to believe in is globalization. Free trade. We as an industry have more to do. We are probably the strongest, best voice for those things. They’re important for Facebook, for HP, Cisco — for all of these businesses, that rely on the free movement of labor and capital.

I think we can do better.

Audience: Asks about the shift to sharing with everyone…

Sandberg: Privacy has always been really important to us. You can share information with some people or with everyone. Making it more open and public isn’t a philosophical shift. We want to make these choices more granular. We’re offering them more and more in different parts of the site. Do I want this to be for everyone? Or just for friends? It’s just a continuation of helping people to share more in different ways.

Battelle: It’s very clear that a lot of the companies in your Internet peer set — Yahoo, AOL, MySpace — are all organizing themselves around a strategy of content. Facebook has never really had that as a center of gravity. Is that going to change? Because there’s a lot of sharing of content.

Sandberg: It’s not going to change. We’re busy enough trying to build technology that helps people share, across mobile devices and the rest of the world. We’re a platform for people to share whatever content they want to, and we’re becoming important referrers.

Audience: What’s your advice to a marketer for connecting with individuals?

Sandberg: We offer a number of products. The biggest advice we offer is do it quickly and iterate. Traditionally, it’s been about planning. Facebook is much more iterative because it’s about two-way marketing. Keep changing your messages. Put a little bit of content once a day is much better than a big push. People are spending time online in a fast, iterative way. Our most successful marketers, whether it’s mom and pop, or large companies. That’s exactly what they do.

Audience: The deals this morning were non-exclusive, so if you partnered with Google, what sort of mash-ups would you imagine?

Sandberg: I have a very big imagination. We have an open platform and we want to work with lots of people across the web. The agreement with Bing is giving them the “everyone” data. No money exchanged hands. We are not trying to make money on data.

Audience: The perception was that older people weren’t on Facebook, now everyone’s on there. Did you consciously set out to do that?

Sandberg: We want everyone to use Facebook. As the site started in a certain age demographic, but we’ve grown and spread across many age demographics. In other countries where we started later, the site grew across broader demographics from the very beginning. The nice thing about Facebook is it’s personal.