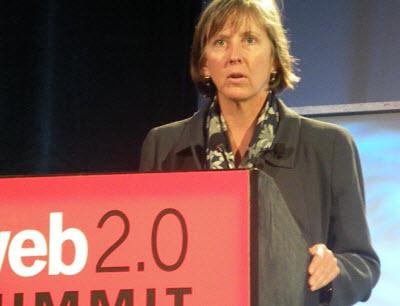 Morgan Stanley analyst Mary Meeker said today that the tech economy is in a state of recovery, based on the leading indicators that usually signal an end to recession. She was also bullish that a huge shift will come about as the mobile Internet, enabled by smartphones such as Apple’s iPhone, sweeps through the world in the coming years.

“The leading indicators have turned the corner, but the lagging indicators are still weak,” Meeker said in a lightning-fast presentation at the Web 2.0 Summit in San Francisco. [Her slides are at the bottom]

She noted that the S&P 500 is up 59 percent from a year ago and the Russian stock market is up 181 percent. Stock markets are typically a leading indicator of recovery from recession.  She noted that credit is loosening up, earnings estimates have started going up as a group, and information technology is the No. 1 capitalized group on Wall Street now (that means that tech stocks are valued the best as a sector).

Meeker said that Intel’s and Apple’s results are good proxies for the recovery. Intel had the best improvement from the second quarter to the third quarter in terms of revenue growth in 30 years. There are twice as many initial public offerings this year compared to last year. Deal volume is twice what it was last year and dollar volume of the IPOs has quadrupled. And there are dozens of companies now in the pipeline. Electronic commerce hit bottom in the first quarter and has been recovering ever since.

On the flip side, consumer confidence is rising but it is still below normal levels. Manufacturing is recovering, but factory usage is around 70 percent of full capacity. Foreclosures are still rising and unemployment remains high at 10 percent compared to 6 percent a year ago. Those are all lagging indicators. Once they’re back to normal, the recovery will be a confirmed fact.

Meeker said she was excited about the positive trends related to technology adoption. One of the fastest-growing sectors is the use of mobile data on devices such as the iPhone. Apple iPhone users account for 65 percent of data usage, but only 11 percent of the total mobile market share in the U.S.

“The iPhone is the fastest growing piece of hardware the world has ever seen,” Meeker said.

Japan is years ahead of the U.S. in mobile data and Meeker believes it will serve as a model for what will come. She said that the U.S. has a long way to go to catch up with the patterns of mobile Internet usage in Japan. By 2013, the number of heavy web mobile users will triple to a billion users.

The shift to the mobile web is no less than a new computing cycle, such as the shift from mainframes to minicomputers, from minicomputers to PCs, from PCs to the web and laptops. Each time one of those shifts happens, the number of users increases tenfold. Indicators of this growth: Global positioning system (GPS) chip shipments are up 57 percent this year, while Wi-Fi chip sales are up 42 percent. On the content side, Facebook has seen huge growth in usage, as have social networks on mobile phones.

All of these trends toward mobile Internet expansion will cause huge shifts in wealth creation, Meeker said. In each major computing shift, new winners emerge, and the incumbents fade away. Here are the slides.