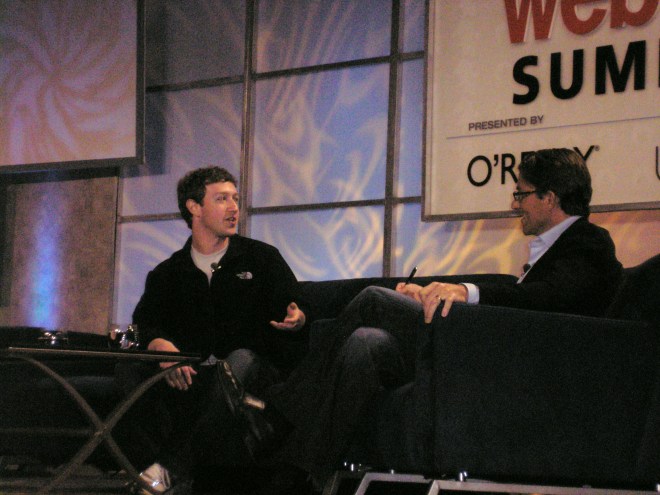 The conversation started with a dance around questions that Zuckerberg couldn’t answer. Asking the same opening question as he did last year, Battelle said, “How’s the financing going?” Last year, Facebook was negotiating a $240 million investment by Microsoft. Rumors are again floating that Facebook is seeking a new round of money. Zuckerberg said it’s not clear that he really needs money right now.

“I’ve never been to Dubai,” Zuckerberg said. Battelle also asked if Facebook’s chief financial officer had been there recently. Zuckerberg didn’t answer. Battelle then asked, “Do you need money?”

The talk moved on. Zuckerberg said there are now more than 100 million users (120 million, to be exact). International growth has been the primary goal this year, Zuckerberg said. Facebook is now being translated into 20 native languages. Facebook is opening a bunch of overseas offices. He noted that 7 percent of the French population is on Facebook now. The company is still pursuing growth. It is not optimizing revenue, but Zuckerberg said that ads and brand direct sales are working well.

“How does it break down?” Battelle asked. Zuckerberg wouldn’t answer that. He said that revenues are in the hundreds of millions. Early on, Zuckerberg said that Microsoft was a big source of revenues. It’s still millions of dollars, but a smaller percentage of revenue than the other pieces, he said.

“Do you think Steve Ballmer is happy with the price he paid?” Battelle asked, noting that the $240 million Microsoft investment valued Facebook at an astounding $15 billion.

It was more about a partnership, Zuckerberg said, than money. “We’ve got a really good partnership,” he added.

Battelle asked again. “Do you think Steve is happy with the price he paid?” Zuckerberg said it was a good valuation but the company does not feel pressure to live up to the valuation from last year.

“On a day-to-day basis, we do not have a discussion where we need to do something to value the company at $15 billion,” Zuckerberg said.

Zuckerberg said that his company is still hiring “really good technical people — the people who are building things.” He also said they are expanding international sales. He noted that the Facebook redesign really helped some useful applications such as Causes.

Battelle asked about Facebook Connect, the next iteration of the Facebook platform which lets developers create apps that allow Facebook users connect to friends on other networks. Facebook Connect was in closed beta test and has now opened up to anyone. Battelle said a criticism of Facebook is that it’s a “walled garden,” particularly because it doesn’t want to be part of a broader, distributed web and won’t join OpenSocial.

Zuckerberg says systems often wind up being open, but they have to “start somewhere.” He noted how Facebook opened itself up to third-party applications. Over time, he said, opening up further is worth a conversation.

“These systems move toward openness over time,” he said. “Look at the PC industry. Microsoft wound up being a strong company because they made itself more open over time.” But, he noted, Microsoft didn’t start that way.

“The challenge we have is to bring people along that whole path,” he said. “Facebook Connect is the next evolution. There is a rate at which this will happen.”

How does Facebook Connect make money? The whole model is indirect and ad-driven, Zuckerberg said.

Is Twitter just a feature of Facebook? “I think they’re doing something pretty good,” Zuckerberg said. He noted they are one of the partners in Facebook Connect. He said that socially aware ads perform much better than others. There was one ad that ran which showed a Facebook user’s friends supporting certain causes such as Obama’s campaign. That one got a lot of results, Zuckerberg said.

What about Facebook being banned, particularly in enterprises and in the Army? Zuckerberg said there are industries that have to monitor employee communications. There are policies that are allowing Facebook usage but ban just parts of it that might be sensitive, such as direct chat, Zuckerberg said. Over time, Facebook is adding tools that make the social network more useful to enterprise businesses, particularly where people can share ideas and get feedback for company-related matters.

“Facebook right now isn’t an enterprise company, but seeing how that stuff is working gives me confidence that someone will build something really good in this space,” he said.

“Is there a chess game going on among rivals regarding openness?” Battelle asked. That was an overly dramatic way of putting it, Zuckerberg said. “We are on stage,” Battelle said. “That’s my job.” Zuckerberg replied, “Fair enough.”

Zuckerberg said it is really early in the platform definition for social networks. He said that it isn’t clear whether OpenSocial and Facebook will always be going in different directions.

Zuckerberg is encouraged that people are sharing more and more things about their lives on Facebook. The more that grows, the more Facebook is doing its job, he said.

Asked how people can alter a cause that they organized, such as the Facebook group that emerged to oppose Proposition 8 in California (which banned gay marriage), Zuckerberg said the tools are there for people to take something that they started and morph it into something else.