Al Gore just finished his talk on the topic of “What Now?” at the Web 2.0 Summit in San Francisco — and yes, the content was as wide-ranging as the title implies.

Despite being an adviser and board member at tech giants Google and Apple, as well as a partner at famed venture firm Kleiner Perkins Caulfied & Byers, Gore might seem like an odd fit for the summit. After all, most of his recent focus (not to mention his Nobel Prize) was for raising awareness of the global warming crisis. And yes, Gore spent some time talking about environmental policy and exhorting his audience to take the issue seriously. He even said President-Elect Barack Obama should make a commitment to switching the United States’ electricity to entirely renewable resources within 10 years.

But Gore isn’t just focused on renewable energy. For one thing, he’s also the co-founder of a “new media” company, Current TV. Today, he argued that the social and collaborative tools grouped under the term “Web 2.0” offer the keys to solving the environmental crisis.

“I believe Web 2.0 has to have a purpose,” Gore said — and that purpose should be raising awareness of global warming.

As VentureBeat’s cloud computing writer, I was also happy to hear Gore praise the Internet cloud, albeit in a rather metaphorical way. He didn’t tell everyone to sign up for Amazon Web Services or Google Apps, but he did say that knowledge about climate change needs to be stored “in the cloud.”

Overall, Gore’s speech was big on inspiration and short on specifics. But boy, what inspiration. I left the room even more excited to write about technology, and about the ways technology is changing the world, than when I went in.

Here are my notes from the talk:

4:35pm: Conference organizer John Battelle’s introduction is super-short: “Our next speaker needs no introduction. … Ladies and gentlemen, Al Gore.” Gore takes the stage to thunderous applause, as well as a standing ovation from a significant part of the crowd. He begins, “Wow, what a week,” spurring another round of applause — sounds like the audience is pretty excited about Barack Obama’s election. “It couldn’t have happened without the world wide web, without the Internet,” Gore says.

4:38pm: Gore plans to discuss the importance of democratizing television, then talk about using Web 2.0 to combat climate change. 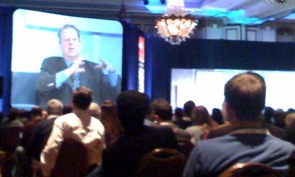 4:42pm: He retells the story of the invention of the electric dynamo, to illustrate a point about Web 2.0. The dynamo’s potential wasn’t realized until the old factories were replaced with new ones, where the dynamo could be located to deliver power wherever it was needed: “Then there was an incredible explosion of activity.” Gore compares this to people sitting around a warehouse, using the Internet to campaign for Obama. It’s time to redesigning the warehouse, and more broadly, “the context in which these activities take place — in other words, World 2.0.”

4:46pm: Gore is a “strong believer in information ecosystems.” For example, the printing press moved us away from the feudal system and ushered in “the reign of reason.” The television, on the other hand, “refeudalizes” information.

4:48pm: The goal of Gore’s media company Current TV is to bring the democratizing influence of the Internet to television.

4:49pm: Gore starts a digression about buying a puppy back when he was a newspaper reporter in Tennessee. One of his colleagues asked about the dog’s purpose, saying, “A puppy has to have a purpose.” Then Gore delivers his kicker: “I believe Web 2.0 has to have a purpose.” In his opinion, that purpose is to create “a higher level of consciousness” about our relationship to the planet, the danger it’s in and how we can fix it.

4:51pm: Battelle and fellow conference organizer Tim O’Reilly starting interviewing Gore. Battelle: “Are you worried about this movement losing steam?” Gore: “No, I’m not. … I think it’s very much in its infancy.” Social activism enabled by the Internet is just starting to take off, he says.

4:53pm: Gore: Solutions to the climate crisis are “ideal” for solving the economic crisis, too.

4;56pm: Battelle wants to know if recovering from the economic crisis means a return to the status quo, or moving to a different lifestyle. Gore says things must change. All of our built environment has to be reorganized to change our relationship to things like transportation.

4:58pm: Battelle says An Inconvenient Truth (the documentary of Gore’s presentation about global warming) needs a sequel that outlines Gore’s solutions and vision for the future. Battelle: “Will you make that film?” Gore: “Oh, okay.”

5:00pm: Gore: President-elect Obama should announce a national goal of getting 100 percent of electricity generated by renewable sources within 10 years.

5:01pm: Gore talks about John F. Kennedy’s goal to put a man on the moon. It happened eight years later, but it’s worth noting that the people in the control room were, on average, 26 years old, meaning they were 18 when Kennedy made his declaration. O’Reilly: “That just sent chills down my spine.” Gore: “Well, keep that. … These young people who have been so inspired by Barack Obama’s campaign and that movement that powered Barack Obama’s campaign want a purpose.”

5:04pm: Question from the audience about harnessing collective intelligence to address these issues. Gore says you can draw analogy between Moore’s Law/advances in computing power and the development of human civilization. Technology can connect people around core ideas. One reason people were excited about Obama’s election was that it was recognizably a “collectively intelligent” decision.

5:07pm: If you want to use “massively parallel” structures, be it for computing or for social activism, you need to start with a vision powerful enough to motivate everyone involved. Then you need a way to communicate about the most important goals, prioritized by urgency. Then you’ve got to maintain the health of your information ecosystem.

5:09pm: Question: Can more good be done serving in public office, or as an entrepreneur and changing the world that way? Gore: “I would have to know more about you and about what you enjoy doing, where your strengths are. … Both arenas can be very fulfilling for someone who wants to bring change. Both of them can be very frustrating, too.” In both politics and business, there’s too much emphasis on short-term results, leading to “insane” decisions. “What I believe is happening is we’re now seeing the evolution of a better way of aligning incentives and goals with what needs to be done in both arenas.”

5:12pm: Question: If you were to budget $100 billion to address climate crisis, where would you spend it? Gore: That’s not going to work, you can’t limit it that way. “I feel as if I’ve failed, badly. … There’s not anything close to an appropriate sense of urgency. This is an existential threat.”

5:14pm: A national smart grid would cost $400 billion over 10 years, but it would “pay for itself” in three and half years by getting rid of unpredictable outages and saving energy.

5:16pm: We need a one-time investment to switch to renewable energy. “It’s not some pie in the sky. It is now.”

5:17pm: Question: How involved should government be in regulating the Internet? Gore: “As little as possible.”

5:18pm: Question: Where does journalism profession fit into World 2.0? Is there a place for a salaried reporter? (Please God, let the answer be yes.) Gore: “Absolutely.” Current TV combines user-generated content with “vanguard” professional journalism. “Any medium or any media company in the Internet era has to strike some balance between the centrifugal forces and the centripetal forces. … We at Current TV live every hour of every day right on that tightrope that marks the shifting boundary between the web and television medium. It is so exciting to live there.” Then Gore says that if the question is interested in a job at Current TV, she should come talk to him.