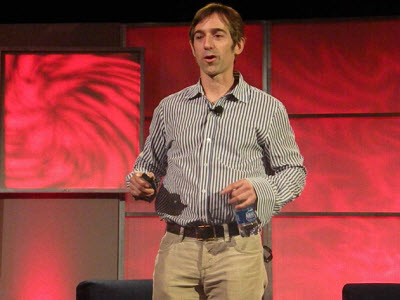 Social gaming company Zynga has been one of the primary beneficiaries of Facebook’s rapid growth to a social network of more than 300 million people.

The San Francisco-based company has been able to surpass 50 million daily active users for its Facebook games, where you can share with your friends the fact that you’ve planted a crop of corn with hundreds of your virtual friends in games such as FarmVille and the even faster-growing Cafe World.

But that’s just the beginning, says Mark Pincus, chief executive of Zynga, speaking at the Web 2.0 Summit in San Francisco. The value of social networking won’t materialize solely in “social plumbing” platform companies such as Facebook. It will be more fully realized as a big app economy emerges, built around social app companies.

This “app economy” is brand new. The growth of social gaming has happened with lightning speed. Zynga launched the first social game on Facebook in July 2007. That was a social version of poker. Today, games such as FarmVille have 20 million daily active users. In the app economy, users takes apps such as FarmVille and sprinkle social bread crumbs with them, driving traffic in certain directions. They monetize by buying virtual goods by paying for them directly. FarmVille sells something like 800,000 virtual tractors a day.

Social apps sit atop host portals such as Facebook or MySpace, which in turn sit atop social plumbing technologies, Pincus said.

“Don’t believe this will end with Facebook,” Pincus said. “You will see many other forms of social plumbing emerge, and the category of social apps will be up for grabs in every traditional sector, from travel to search to gaming.”