Relatively few people have the time and skill to sit down and hand code a community-based website. Even fewer actually want to. Webjam is a service that simplifies that process greatly. However, there are plenty of other services out there like the well-funded Ning and Soceeo. But as Webjam cofounder and chief executive Yann Motte told us, “people have learned to do all this stuff [build sites with online tools] the past few years, the key question is: ‘What the hell to do now?'”

The answer, as he explained, lies beyond building sites simply for the entertainment value. It lies in building communities with a purpose. Webjam feels it’s the service best poised to do that because it has a great set of tools to help users build their sites. The best of these tools rise to the top thanks to the wisdom of the crowds.

You see, Webjam makes it simple for anything that is on a Webjam-powered site to be replicated with one click. (Assuming it’s not some piece of proprietary work that the original author does not want you copying.) By tracking what modules and widgets are copied most often, Webjam creates a directory for the best of these, much like news site Digg promotes its most popular stories to its front page.

In fact, Motte calls the widget popularity function a kind of “Digg on steroids” because it isn’t simply about voting on what features are best, it’s about which ones are actually getting used and shared the most. The fact that you can see various ones in use on different sites and cherry-pick the best is a very nice feature. 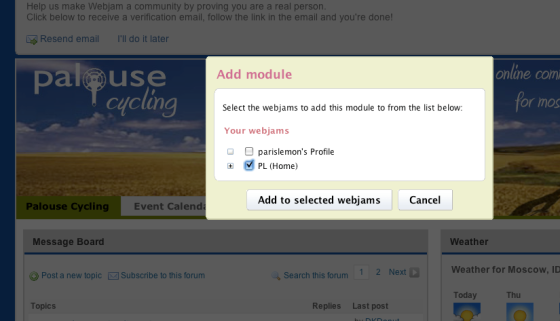 Motte believes that there is a rising trend on the web towards openly sharing things by default rather than having everything locked down. As he explained, “if you run the local football team and make a site, you’re happy to have another site take it over [meaning its look and feel].”

One thing that Webjam is particularly proud of and another way it helps differentiate itself from Ning is that the average time spent on a Webjam site is significantly higher than it is on a Ning site, according to data from Compete. Motte thinks that this reflects Webjam’s attention toward helping create sites that communities want and the service’s ease in layering on different ways to interact on these sites.

But it really comes down to how easy it is to build a solid site from scratch. Ning looks a little nicer from a user interface (UI) perspective, but Webjam’s site-building tools are more intuitive. This is especially true when you visit other Webjam sites and see something you like and can simply grab it for your own site.

That being said, Webjam has a long way to go before it will catch Ning in both hype and, more importantly, usage. Ning had over 8 million visits in June of this year, according to Compete. In that same month, Webjam had just around 80,000. Year over year both are growing, but impressively (given its size), Ning is growing even faster than Webjam still. Did I also mention Ning’s valuation is now north of a half billion dollars?

Right now Webjam is still a relatively small company based out of the UK. It hopes to open an office in San Francisco, Calif. before year’s end.

In terms of making money, Webjam offers a premium version of the site builder that lets users do things such as take control of their own advertisements and use their own domain names. In September, the company will launch Webjam Branded Service offering, a fee-based business-to-business-to-consumer (B2B2C) service. This is what it’s called when a business sells a service or product to a consumer using another business as an intermediary.

Webjam raised a $2 million first round last year. Earlier this month it extended that round a further $1.9 million, led by original investor I-Source. It is said to be working on a larger second round.