Vidyo announced this morning that it has signed an agreement with Google to enhance video quality in web-native applications that do not require any plugins or special software.

Vidyo’s technology lets you offer different quality video and audio streams to users accessing the same content based on their unique bandwidth and device characteristics.

In other words, a smartphone user on a weak 3G connection could be automatically sent a lower-quality, lower-bandwidth version, while a desktop user on Google Fiber could be sent a full-quality stream.

As part of the agreement, Google will license Vidyo’s scalable video coding extensions for use in its free and open source VP9 video codec, Vidyo said, which will be used as part of the WebRTC client open source project.

“We will now combine the power of WebRTC with the benefits of Vidyo’s technology to deliver the best possible experience for our users,” Chee Chew, VP of Engineering at Google, said in a statement. “Vidyo has been a great partner, working with Google to provide a high quality video solution for Hangouts.” 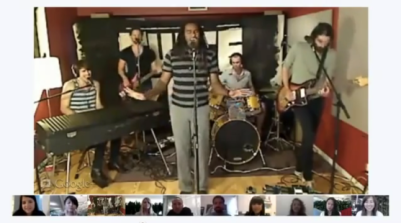 WebRTC is a protocol that enables browser-to-browser and browser-to-server communications, making web pages much more responsive, app-like, and real-time.

One of the biggest advantages to Vidyo’s technology, however, which Nintendo also uses on the Wii U, is that fact that participants don’t need to download any special plugins to participate in video conferences or chats. WebRTC is intended to be web-native for every browser, and although it’s not fully implemented yet in all of the major contenders, it is already being used by companies like TokBox to deliver better video for Major League Baseball and other clients.

“This is great news for the WebRTC community and takes our relationship with Google to the next level,” said Ofer Shapiro, cofounder and CEO of Vidyo. “WebRTC provides a vision of new communications possibilities for video-enabled web applications, and by leveraging Vidyo’s expertise in SVC, we will jointly create a path to accessible quality video.”

However, to date only Firefox, Opera, and Chrome — which, arguably, accounts for more than half of all web browsing — support WebRTC. Which leaves two major omissions: Apple’s desktop and mobile Safari, and Microsoft’s Internet Explorer.

Embedding Vidyo’s scalable video technology into VP9 adds some fuel to the standards war over online video, which has quietly been brewing for some time. Google and its partners are throwing their weight behind VP9, while Apple and Microsoft are sticking to H.264 and its successor, H.265. Both have the potential to improve online video while decreasing required bandwidth, but H.264/5 has royalty payments associated with it, while VP8/9 is intended to be free and open — though Google’s rivals have asserted it is designed to align online video with Google’s own interests.

That will bring YouTube and Google Hangouts closer together technologically and could open up all kinds of interesting interaction possibilities for Google to offer YouTube viewers — and better connect the massively popular YouTube with its young-but-growing social network, Google+.