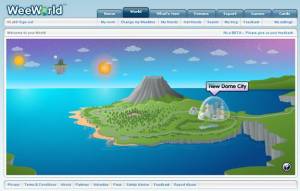 Cutesy virtual worlds seem to be getting quite fashionable today — both Gaia Online or Habbo Hotel have millions of players. So it’s no surprise that we’re getting yet another new cutesy world today with WeeWorld‘s launch of a virtual world for users of its WeeMee avatars.

As I wrote just a month ago, the company is clearly picking up momentum. WeeWorld has seen a million people log into its social networking site every month and 600,000 new avatars are being created each month.

Until now, WeeMee creators could use the avatoras as their faces on Facebook or in an instant-messenger client and create and decorate their own rooms on the WeeWorld web site. They could also message friends in an asynchronous fashion, trading one message at a time.

But according to Lauren Bigelow, general manager of the London-based company’s North American division, users were asking for a live world, where the avatars could roam around cities and interact with eachother in real time.

The resulting virtual world, also (a bit confusingly) called “WeeWorld” is now in beta release. With this new property, the company hopes to expand its revenue opportunities with more advertising, virtual good sales, and online shopping. The average age of avatar owners is 19.

I am totally the wrong judge about whether a world like this will succeed. Habbo Hotel, for instance, seems to me to be a vast teen-age wasteland. I don’t see what is going to distinguish WeeWorld from some of the other virtual worlds out there. There are dozens getting funding, as we reported earlier. And Gartner just issued a report saying that 90 percent of virtual worlds will fail in their first 18 months.

On the other hand, market researcher eMarketer predicts that 20 million child and teen Internet users in the United States will visit virtual worlds once a month by 2011. WeeWorld blends fantasy with characters and buildings based on real life. Destinations include the Sky Tower, the underground Club Cavern, a hang-out called Chillax Station and the undersea-inspired Nautilus Club. 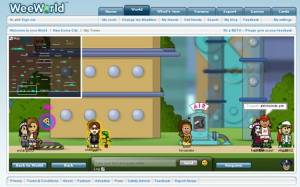 WeeMee characters can move around the world, explore, chat and socialize in personalized rooms. Future activities will include quests where characters can track down hidden objects. The company will also tailor the world based on user feedback.