There’s a generational shift in technology happening right now: From the open Web to native apps, from desktops to mobile phones, from platforms built on standards to platforms owned by corporations.

Let’s call it the second Internet. Here’s what it looks like: 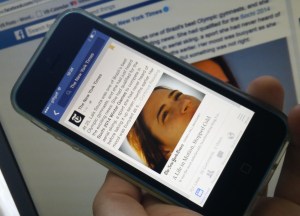 That’s right — it’s Facebook. More than 1.44 billion people use Facebook every month, and almost a billion of them use it every day. The majority do so via the Facebook app on their phones.

Think about that: A decade ago, the majority of people using the Internet were doing so on desktop computers or laptops, accessing HTML and JavaScript websites. Today, a vast number — maybe not a majority, but a lot — experience the Internet primarily through Facebook’s mobile app.

That’s why publishers like the New York Times, Buzzfeed, and National Geographic were so eager to test out Facebook’s new Instant Articles platform.

This platform puts publishers’ stories directly into the Facebook app (on iOS only, for now), where they load more quickly than they would if Facebook just linked to the publishers’ websites — which take an average of eight seconds to load, Facebook says. Instant Articles also offer a variety of snazzy tools for publishers to present their images and interactive elements.

Facebook’s efforts to become a publishing platform are not unique. Instead of publishing posts on their own blogs, many of the best writers in tech journalism are now publishing on Medium, a site completely owned and controlled by one company. Why? Because the experience of writing and reading is so much better on Medium.

It’s not just consumers who are shifting toward platforms that are more engaging, easier to use, and yet more controlled.

In corporations, Slack is taking off like an F-18 engaging its afterburners. VentureBeat is testing it out, and it’s easy for me to see why people view it as the long-awaited email killer: Slack is fast, fun, and works almost exactly the same way on a variety of devices.

If it can kill email, that’s a good thing, because most people hate email. There’s too much of it, it’s inefficient, and it’s no fun.

But we lose something when we move from the open Web to Facebook, or from email to Slack. What we lose is the ability to build tools that interoperate with our new platforms without first having to ask permission.

That’s not how the Internet was built: It was designed by groups of people discussing and gradually coming to consensus on what standards should govern various technologies.

I’ll grant you, standards are boring. They emerge only out of endless, dull committee meetings. They are difficult to understand without specialized knowledge, and they can be a pain in the ass to implement.

But the upside is that you don’t have to ask permission to build an email client, or a Web browser. You just study the relevant standards, build the best tool you can, and put it out there. If it works well and it is sufficiently compatible with the standards that other people are using, it has a chance of becoming widely adopted.

Where did the Internet fail us?

It’s clear, though, that the standards-driven Internet, for all its interoperability, is leaving people wanting. It’s not clear why.

Facebook is clearly more attractive than the open Web to many people. Instant Articles will only accelerate that trend, keeping more Facebook users inside the Facebook app.

Slack is far better than any email client — and believe me, people have tried to make email clients fast and fun.

And mobile apps, based on device-specific native code, continue to outstrip the growth of universally accessible mobile websites.

The hypothesis I am reluctantly proposing here is that maybe the standards-based Internet can’t deliver a great user experience. Maybe you have to go beyond the Internet’s standards to really delight your customers. Maybe you have to take control of the platform.

I’m not about to make a simplistic distinction between “open” and “closed” systems, because the truth is a lot more complicated. Facebook and Slack are both highly extensible platforms, and they’re open in many ways. Facebook in particular has made every effort to publish APIs and embrace developers, giving programmers the tools to build on top of Facebook with minimal interference or oversight. Slack is easy to extend with integrations that plug it into a variety of other tools, and it’s easy to see it becoming even more extensible in time.

But at the end of the day, these companies own their platforms, and can dictate the terms. Perhaps that is exactly why the customer experience is better there.

But if they’re open and welcoming to developers today, these platform owners could easily change their tune tomorrow.

That’s why nearly every story about Facebook’s Instant Articles includes some kind of comment from the publishers, or from the reporter covering it, about the risks these publishers face. “We’re going in with our eyes open,” the NYT CEO told Recode, somewhat defensively.

It’s an issue for consumers as well as publishers. When Facebook is a publishing platform and your sole source of news, how comfortable do you feel that the news is free and independent?

And for other corporations: When you’ve traded free, open email standards for the nicely designed confines of Slack, will you regret it in 12 months — or five years — when your company owes enormous monthly fees to Slack and there’s no viable alternative?

Or will it simply not matter, because the user experience is so awesome?