If you get superstar athletes to invest in your youth-sports social network, does that mean you’re onto something big?

WePlay seems to think so. The company, which combines standard social network features with scheduling functionality to manage practices and games, hopes to attract young athletes and their parents and coaches, and has just raised $8.6 million in its second round of funding. While Deep Fork Capital led the round, previous investors Derek Jeter, LeBron James and Peyton Manning and FirstMark Capital came back as well. 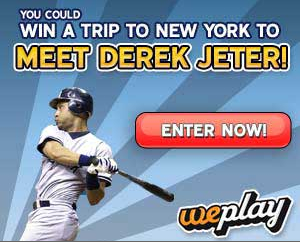 If WePlay were any other kind of start-up, we’d wonder why it would raise money from athletes who know nothing about start-ups. While Curt Schilling has a minor reputation for knowing his way around the tech game, Derek and LeBron certainly do not. But in this case, it makes good sense. WePlay is competing in two competitive markets without any major differentiators in either one. On the youth-sports social network side, it is up against the more established Takkle. On the scheduling side, there is RosterBot and TeamSnap.

Having sports superstars behind it could give WePlay an edge. The company is not shy about it: The two most prominent features on the site right now are a big square banner offering a chance to meet Derek Jeter and a 15-day old “featured member” blog post from none other than LeBron James.

That’s the difference, right there.