The HBO TV show Westworld has created a Google Assistant action that will talk to you about a trip to Westworld park, a world where AI-powered robots are starting to become self-aware and violent.

You speak with the Google Assistant service by saying “OK Google, let me talk to Aeden at Westworld.”

Aeden is a chatbot that made its debut last fall on the Discover Westworld website. It acts like your travel agent and answers questions like “What is the maze?” or “Who is the man in black?”

Some questions unlock unexpected answers. Ask “Who are you Aeden?” three times and you will hear a long series of numbers and letters followed by “You’re in a prison of your own sins. Hell is empty and devils are here. Arnold will come for you.”

You can ask Aeden about Westworld characters. Speak with a host (robot) about an adventure.

If you didn’t see the season finale of Westworld, spoiler alert: The robots break into full rebellion, and after the season finale last month, the online version of Aeden also began to act differently, and started dropping Easter eggs for season two.

Hell and devils may be on the menu, but Aeden on Google Home will not speak to you about sex, guns, or alcohol, which is strange since Westworld is a TV show full of sex and violence.

Tell Aeden on Google Assistant you want to have sex and it will say “While there’s no limits in the park, we have to keep things PG on Google Home. Meet me on discoverwestworld.com for a more mature conversation. We still have plenty to talk about. What piques your interest?” 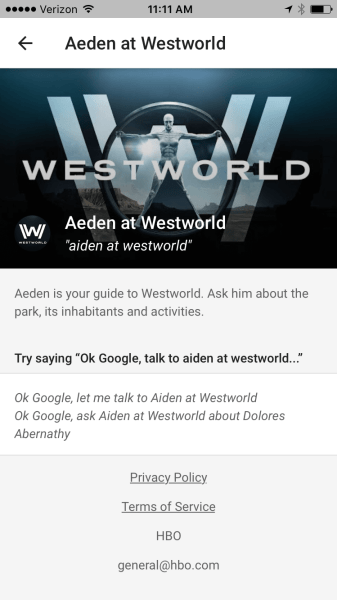 Whether it’s a failure to hear what I said correctly, the fake broken code, or even the misspelling of Aeden on the Google Home app, the brilliant part about speaking with Aeden is that the entire show is about malfunctions or self-awareness in artificial intelligence. So when you speak to the Google Assistant action and things go wrong, it’s hard to tell if that’s intentional or not.

Westworld’s bot, like several other bots launched in recent months, was designed to bring you closer to a brand.

The Channel 4 series Humans, about robots slowly becoming self aware, has a Facebook Messenger bot. Call of Duty: Infinite Warfare has a tour guide bot, and the sole purpose of mattress company Casper’s bot InsomnoBot is to send you random late-night text messages about pizza or Seinfeld reruns.