Electronic Arts and FIFA the EA Sports FIFA 20 Global Series Road to the FIFA eWorld Cup announced this week. I spoke with Todd Sitrin, senior vice president for competitive gaming at EA, about it.

I joked it was the longest name of an event I had ever seen. A very corporate name, meant to satisfy a number of interests. And it seems that is what esports is becoming.

Esports is no joke. It’s not a renegade piece of the game industry, full of endemic brands like Red Bull trying to get the blood of esports athletes boiling. It’s no longer a wild thing that flips its finger at the mainstream. Esports has become mainstream. It’s a big business, and it enables EA to generate more than 800 million minutes of viewing for last year’s FIFA esports tournaments. Big brands like Pepsico, Anheuser Busch, Mastercard, and Louis Vuitton have seen that, and they are pumping money into esports sponsorship.

And gamers, those who didn’t fit in at high school because they were solitary and nerdy, are becoming hip and social and appreciated by teachers, parents, and college adminstrators who are giving out scholarships for esports athletes. Sounds like a game company’s fantasy. But I talked about this reality with Sitrin at Esports BAR Miami. 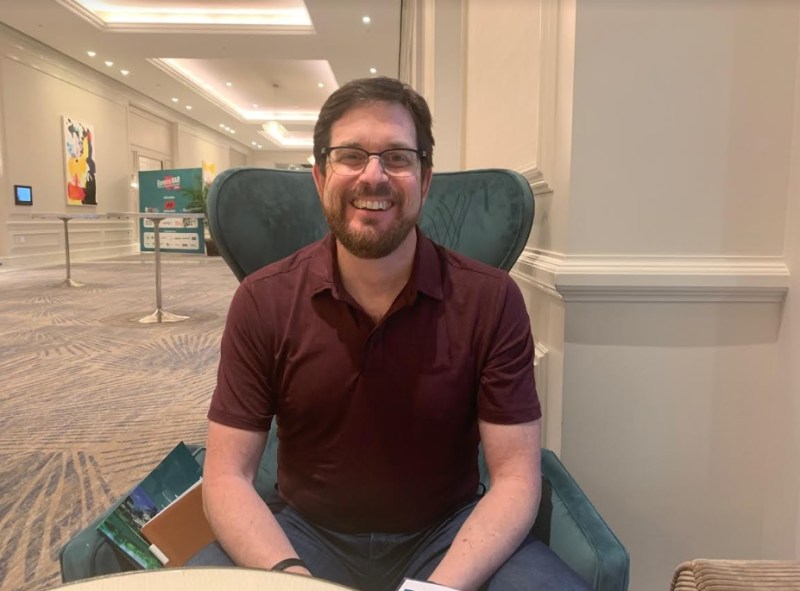 Above: Todd Sitrin is senior vice president for esports strategy at Electronic Arts

GamesBeat: That was, I think, the longest name of an event or show I’ve ever seen. EA Sports, etc., the Road Show. Can you remember the whole thing?

Todd Sitrin: I’ve worked a lot of my career with licensed properties. As a result of that, sometimes that does change the naming structure.

GamesBeat: It sounds like something fun, a very good idea.

Sitrin: We’re super excited. This is the first batch of games. FIFA was one of our first when we started the division. This is now officially the third year, third full year. The size that the competition has gotten to has been pretty amazing for me, given that when we started, I wasn’t sure how big things would get. That’s been really positive to see.

GamesBeat: How big was last year’s?

The other metric we look at in terms of size—because we’re a game affiliated with the real world of football, it’s been our partnerships with football leagues. We’re now up to more than 20 football leagues, including some of the biggest ones, like the Premier League and Bundesliga and La Liga. The MLS in North America. Ligue 1 in France. The UEFA Champions League. They’re all running programs. That’s probably a 40 percent jump year over year, just in that number alone.

GamesBeat: What was the content of the roadshow? Is it human interests sorts of stories on the competitors?

Sitrin: The announcement is the entire season ecosystem for the year, which as I mentioned is moving up in scale around that. You may be referring to—tomorrow at 2PM eastern, we’re having an EA Sports FIFA preview show on our Twitch channel, where people can—some of our casters will be going through all the details.

GamesBeat: As far as the investment in the broadcast center and so on, how is all that proceeding? Are you saving a lot of money that you otherwise would have had to spend with outside companies to produce these kinds of things?

Sitrin: In general, competitive gaming is a strategic priority for EA. That’s why we’ve made the investments. We’re now working with five different franchises across EA, FIFA being our biggest. Apex Legends is probably our next biggest, and then our sports games — Madden, FIFA Online 4 in Asia, and then we’re partnering with the NHL on their program.

Part of that investment has been not just to create competitions at all levels – ones that we run, one we license out that our partners run — but it’s also been creating new content. We decided that it was better for us to build our own facility. We went online in March of this year.

That has two benefits. The first is it allows you to control the quality of the content much more, because you have your own facility. You can have more creative control and do more innovative things around that. The second is it’s a cost efficiency. Rather than leasing studio time, you’re building an asset. It’s the difference between buying something versus leasing something. There’s something of value that we have.

We’ll be using it tomorrow for our FIFA preview show. We’ve used it for Madden. We’ve been doing shows on some of the games that we’re supporting in the community, things like The Sims, out of that studio as well. 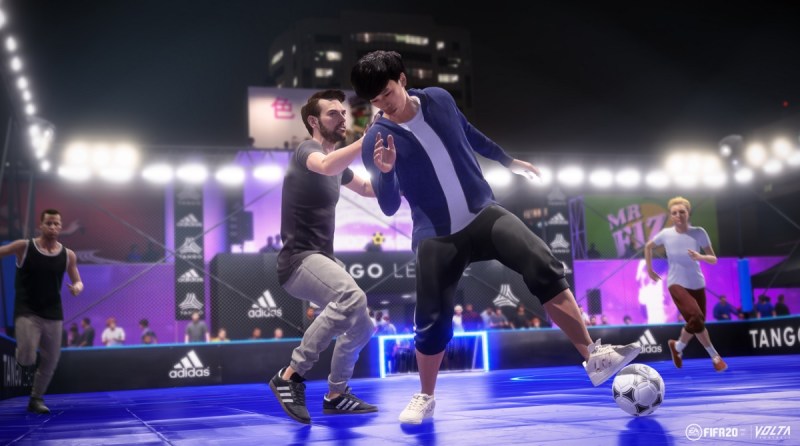 Above: Volta is street football in FIFA 20.

GamesBeat: Did you see the Todd Harris presentation? I wondered if the Skillshot thing was something you could also do, producing content broadcast for other companies.

Sitrin: There’s no reason why we couldn’t, but right now, given the volume of our own franchises, that studio capability is being used at a very high level. We have enough demand for the supply that we’re not seeking out other people to work with right now.

GamesBeat: The other discussion, with the Anheuser Busch people, was also interesting. They’re waking up to the notion that not all those brands will fit in all these different games. An alcohol brand doesn’t fit in all-ages games, like a lot of your EA Sports titles. Do you deal with those kinds of restrictions?

Sitrin: There are some approaches we take because we have licensed properties, where we have to involve the licensor as well. We haven’t really broached that topic for our games. Right now we’ve had a lot of interest because we’re a very accessible esport. We’re probably the most accessible out there, because people understand the rules. They understand the leagues and the players on our sporting sides. But we haven’t yet concluded a deal with anybody in those sorts of areas.

GamesBeat: Battlefield V would also have restrictions on the other end, because companies don’t necessarily want to be associated with violence.

Right now the esports industry is primarily made up of viewers who are players of those games. How does the esports industry actually become mass entertainment? It’s going to have to become more accessible. One advantage that sports video games have — in the case of FIFA, there are 4 billion football fans around the world who watch the sport today, who know teams, who know the virtual players on the field. There are also brands all across the world that already feel comfortable making an investment in the sport of football.

That takes down a lot of the barriers to getting to the mass market, because of the familiarity on both the sponsor side and the viewer side. There’s a huge opportunity here. That’s why we’ve seen the type of growth that we’ve seen over the last three years. When I came to my first Esports Bar three years ago, the very first one, most people said, “Why is EA even here? Why would anybody be interested in a sports video game as an esport? If I’m into real sports, why would I choose to watch an virtual version rather than the real thing?”

Year after year we keep posting bigger numbers. It keeps on getting bigger. The answer is, people are drawn to competition. They’re drawn to people and personalities. If there’s a familiarity with them, it’s easier to get into. It’s a gateway into esports, as opposed to what I would call either blood-related – that turns a lot of people off – or just the complexity of other games in our industry that require an incredible level of knowledge to understand anything about what’s going on.

GamesBeat: Do you see potential in esports at the high school level?

Sitrin: We see a lot of potential in getting as many people to play competitively as we can. When we founded the division, the competitive gaming division, our vision statement was to make stars of all of our players. That doesn’t mean that you have to be a professional player to be a star. It means that no matter your skill level, there should be a competition for you.

We’ve always been a big believer, and we’ve done things like collegiate programs. We’ve talked to a lot of players in the high school sports space. We encourage people because we believe that competition is good, whether it’s a virtual sport or a traditional physical sport. It has a lot of benefits. It creates a social network for people. It creates a way to learn how to overcome challenges. It’s a very positive thing. We’re highly supportive of it.