Fans of virtual reality felt a punch to the gut this week as AltspaceVR announced it would hold its last social VR gathering on August 3 and then shut down.

AltspaceVR was a social space in VR where people could gather in environments that resembled virtual worlds. They could create their own avatars and chat with friends. As such, AltspaceVR was like a harbinger of what the world would look like as a virtual society. Facebook followed up with its own version of social VR chat, while others — such as Rec Room, Roblox,  Linden Lab, and TheWave VR — have offered their own takes on social VR.

In a blog post, the company said it ran into “unforeseen financial difficulty” and couldn’t afford to “keep the virtual lights on anymore.” The post said the company tried to raise a new round of funding but a deal fell through and it ran out of time and money. It added: ” We’d love to see this technology, if not the company, live on in some way, and we’re working on that.”

Romo said in an interview with GamesBeat in April that AltspaceVR was hoping to monetize events that companies paid for, not unlike the way Linden Lab monetized corporations in its Second Life virtual world. But AltspaceVR’s traffic was relatively small, at about 35,000 users a month. That’s a sign of how small the overall base for VR is and it probably tells you why the company ran out of funds, as that number isn’t enough to get investors excited.

It’s not clear exactly what this means for other VR startups, but everybody knows that growth is slower than expected. (Mobile and PC-based VR units are expected to grow from 6.4 million globally in 2016 to 20.3 million in 2017, according to SuperData Research.) Other VR startups, such as enterprise-focused Envelop VR, have also shut down this year.

Above: Eric Romo, CEO of AltspaceVR at SVVR.

“Altspace advanced VR as a medium and, while it may have been ahead of its time, it demonstrated the potential of social VR. Everyone working in VR should be grateful for their contributions to the space,” said Amitt Mahajan, cofounder of Presence Capital, which invests in AR and VR startups. “I think we’re likely to see a virtual world like Altspace eventually work, but it’ll likely be something that first starts off fairly constrained in what you can do with others and grows from there to a fully fledged social network.”

Greg Castle, founder of Anorak Ventures and an early Oculus investor, said he was sad about the AltspaceVR news.

“There are two distinct strategies I see in social VR,” he said in an email. “Companies focused on building out the infrastructure (outside in), and those focused on customer experience (inside out). AltSpace and Linden Lab’s Sansar, for example, have spent a lot of time building out a really robust infrastructure platform and are largely relying on other developers to create fun experiences built atop their platform. Rec Room and Star Trek, on the other hand, have focused more on providing a compelling, engaging experience off the bat for users, which in turn has the potential to build a strong social community. Given the user numbers and slower adoption curve, as an investor I prefer the latter strategy.” 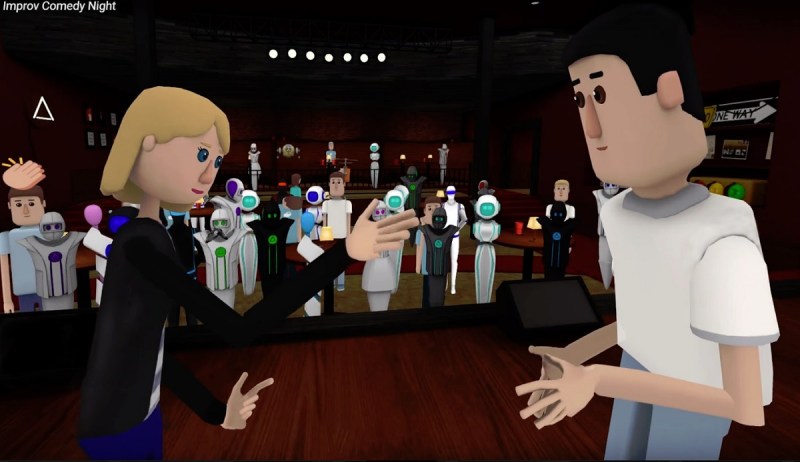 He added, “In terms of what it means for venture-backed VR companies, I think it’s probably a reality check in a somewhat frothy market. I think Eric and his team are fantastic and trust they’ll find their way.”

And Tipatat Chennavasin, cofounder of the Venture Reality Fund, said in an email, “When a shutdown happens, it’s hard to understand without knowing all the details. AltspaceVR, led by Eric Romo, was a true pioneer and did some ground-breaking work in VR and social. It’s a shame they weren’t able to get further funds to continue to innovate — the news also comes right after Within announcing a $40 million round, indicating evolving investor dynamics in the sector.”

Chennavasin added: “For later venture rounds, the bar is raised higher and tangible metrics really come into play. A lot of times the main challenge for early innovators is to manage the company’s growth in a nascent but potentially explosive market where there are no established investment patterns and the venture investors are still discovering the subtleties of the sector. Altspace has opened many doors of creativity and teased us all with compelling possibilities in social VR. I’m afraid their timing wasn’t precisely aligned with investor sentiments, especially in later rounds where certain growth parameters are expected, which is hard to do in early stages of the VR market with a small installed base. One last thing I will add is that the team were not just pioneers but also great supporters of the larger VR development community and will be missed. They have definitely learned a lot on their journey and I look forward to seeing what they do next.”

Andrew Wilson, CEO of Electronic Arts, also said on Thursday that it may be a couple of years’ wait for the mass VR market.

Jason Rubin, head of studios at Oculus VR, said in an interview last week that he isn’t surprised big companies like EA and Activision Blizzard haven’t jumped into VR yet. He sees smaller companies moving into VR that they will stake out the opportunities first. Once that happens, the big companies, like EA, will likely acquire those that have the lead.

Regarding Wilson’s comments, Mahajan said, “I don’t disagree with him. The consumer VR market is going to take a while to develop still. I think new Daydream phones and Apple’s (rumored) addition of an OLED screen to the iPhone 8 will help drive adoption of mass market consumer VR. But we’re at least one phone refresh cycle away (18 to 24 months) from everyone having VR available to them.”

Stephanie Llamas, analyst at SuperData Research, said, “I think the closure was an example of how good companies suffer from the prematurely inflated expectations for the industry as a whole that many companies had early on. Primarily, investors are now spooked because there was an overvaluation of the market. Now that growth isn’t going as fast as they’d expected, they reevaluated their risk and are now undervaluing certain opportunities. AltspaceVR was truly a pioneer in the social VR space. It should not have been discounted, and I honestly think this is a tragedy for the industry.”

Bjorn Laurin, vice president of product at Linden Lab, said he too was sorry to see the sad outcome for AltspaceVR. But he said, “We remain bullish on the future of social VR.”