Jason Rubin can take a moment to sigh with relief. Now that the Oculus Quest wireless virtual reality headset has launched, it’s clear that the device has been selling out in some locations.

I spoke with Rubin at the Electronic Entertainment Expo (E3), the big game trade show in Los Angeles. Oculus scooped up some of the space that Sony left behind, as the PlayStation company decided not to exhibit on the show floor this year. But for all of its success so far, consumer VR still has a long way to go.

We talked about the initial sales of the Oculus Quest, the potential impact of 5G, streaming to the TV, the state of VR headset competition, and where it’s all going. By the end of the year, Rubin said there will be more than 100 games on the Oculus Quest.

Oculus VR recently announced its next Oculus Connect event will come on September 25 and September 26 in San Jose, California, where it promises a new chapter of virtual and augmented reality. 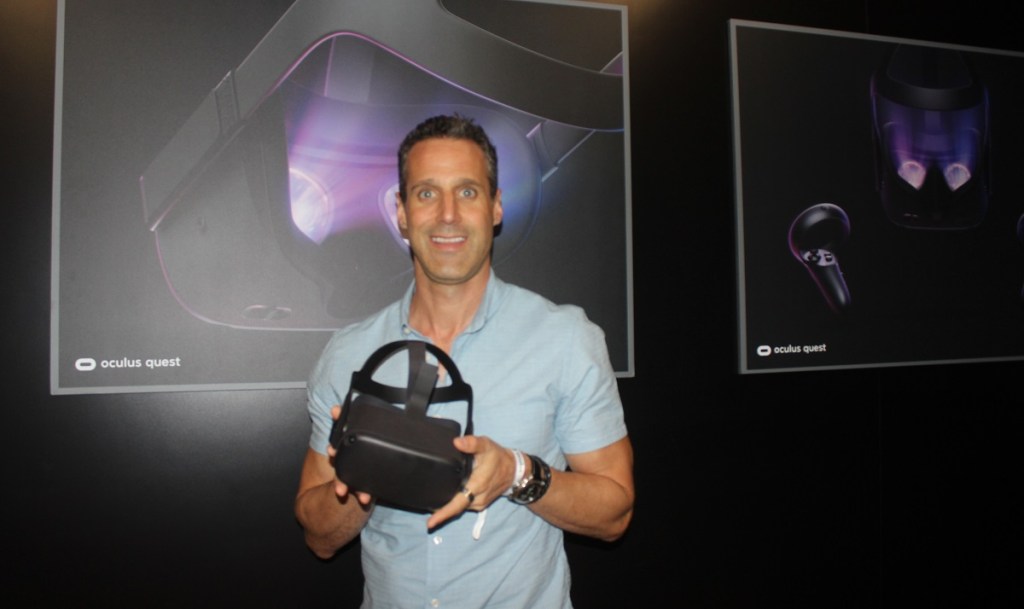 GamesBeat: How do you feel about this E3 and what you’re showing?

Jason Rubin: Great. We now can say Quest is doing really well. We don’t have to say it’s coming out and it’s going to do really well. It’s sold out at Best Buys. I found that out, actually, because I needed one quickly and I’d left mine at the office. I was going to go to the local Best Buy, and they were out. The website said it was out of stock for 250 miles. In Los Angeles that means five percent of the population.

People love the software. Beat Saber, obviously, is killing it. The 360 mode, we’ve heard some people say that’s the way it’s always been meant to be played. Vader Immortal, that’s coming to PC, which looks beautiful. That’s next week, I think, June 20. That’s a big deal. Lone Echo 2, sequel to the VR game of the year a few years ago. Stormland is getting bigger and bigger. Asgard’s Wrath is getting bigger and bigger. Phantom, the kayaking game, looks awesome. After the Fall is coming out.

Then there’s the anecdotal stuff. It wasn’t Oculus, but a VR game topped the list on Steam the first time. These are the steps you take as you’re making it happen. I feel very good.

Above: GamesBeat’s Dean Takahashi tries out the Oculus Quest.

GamesBeat: The way the games are looking on the Quest—they’re looking pretty good. I don’t necessarily feel like I’m missing something compared to a larger version.

Rubin: I’m trying to remember when it was. Sometime in the early 2000s I gave a speech, which was, “Great Graphics: Who Cares?” The concept of the speech was that we’d reached a point somewhere in the PS3 era where we could do much of what we wanted to do. Not all of it, but much of what we wanted to do. It didn’t matter how many reflections there were on a helmet in Madden. That was all great, but it wasn’t changing gameplay.

The things you can do to change gameplay are great, like putting servers together and rendering physics locally, things like that, but as far as graphics—I love great graphics. Some people really love it. But gameplay can be done across a lot of graphical styles and still be good. I think Quest proves that. No question, Vader Immortal looks better on a PC. You should try it. Having said that, Vader is Vader. The lightsaber is the lightsaber. Beat Saber is another example. No question, Beat Saber looks better on a PC. But it’s still Beat Saber on Quest.

I do think more power on the mobile headset would be a useful thing. It would enable gameplay that isn’t currently possible because of how much physical interaction or whatever. But we’ll get there. The cordless mobile thing is working. 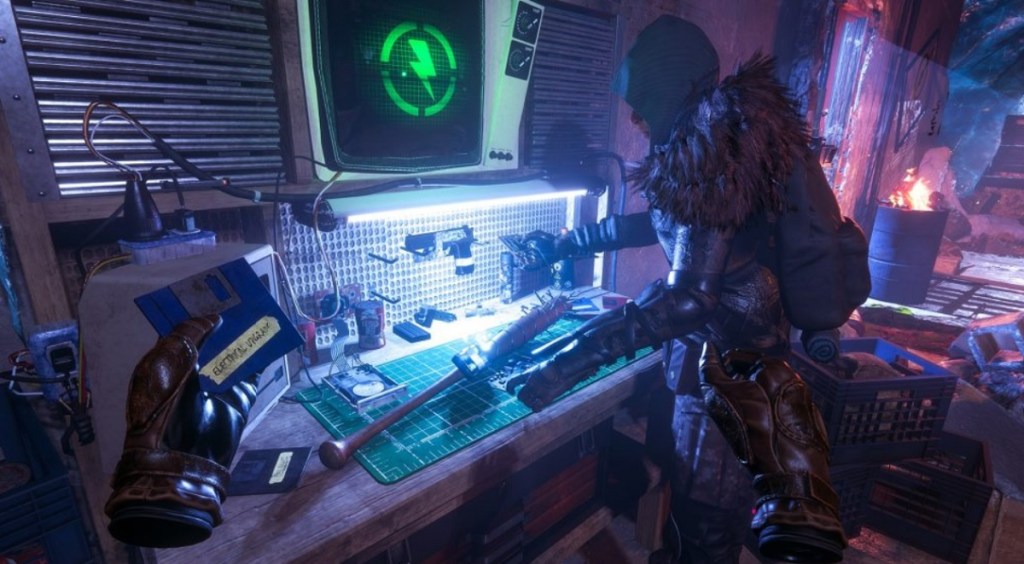 Above: After the Fall

GamesBeat: What happens next? What are you driving toward?

Rubin: More and more software. That’s one thing. We’re going to be releasing a bunch of titles a week on average for the foreseeable future. We’re adding to the 50 we had at launch. We’ll have at least 100 by the end of the year. We’ll keep going. You have to remember, developers didn’t really have Quest that long, except for the 50 we were working on. We’ll do great. We’re continuing to work on future hardware, of course. We’re building.

GamesBeat: Are people trying to get it to their TVs, sharing it in a social way?

GamesBeat: How soon would you predict that a feature like that will be ready for prime time?

Rubin: Good question, and I don’t know. I’d have to ask the engineering teams. But we are working on it.

GamesBeat: Things like 5G coming along, does that make a difference? Or is Wi-Fi fast enough for any application?

Rubin: Quest is a wi-fi device. It doesn’t have a 5G chip in it. In the future, could 5G be good for VR? Yes. Although using VR outside of your home or a space that’s generally going to have wi-fi, probably not a massive use case. I’m not sure I’d recommend it on uneven surfaces, like in a park or something. It definitely could help. 5G is great. It’s very fast. I’m not sure it’s a game-changer, because most people have wi-fi where they’d use their VR headsets. 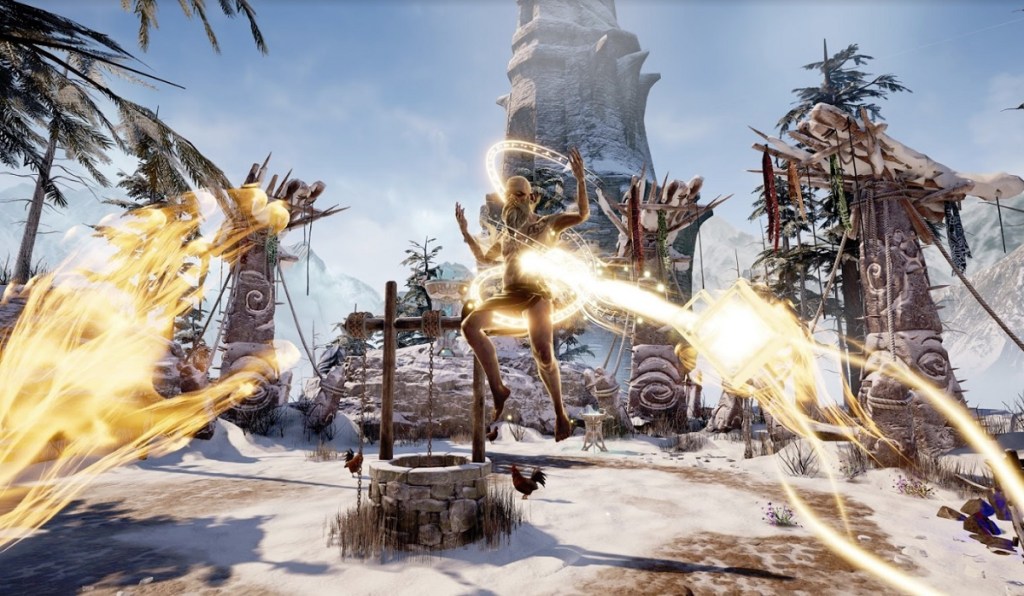 Above: There are lots of Sagas to conquer in Asgard’s Wrath.

GamesBeat: Now that EA, Activision, and Sony aren’t here, it’s starting to feel a little more comfortable than it used to be.

Rubin: The console cycle is kind of at the end. People aren’t putting a huge amount of money into that kind of thing. I don’t know. It does seem like a quiet E3.

GamesBeat: How do you feel about your competition with other VR platforms?

Rubin: I feel really good about Quest. The price point, the quality of the hardware, and the software library we have in our store is unparalleled. Inside-out tracking is the future. Anybody that doesn’t believe that is trying to make an excuse for technology they haven’t perfected. Look at how much easier it is to have a setup at E3 than it used to be. We used to have the sensors on the wall and all that stuff. Now it’s just a headset hanging on a hook.

GamesBeat: I ran into this company called Mind VR. They’re doing VR 360 videos and photos for senior homes. Since these people can’t travel, they’re getting their minds blown by visiting places they otherwise couldn’t. They bring this in as a service for senior communities. I think all they need is wi-fi to get it going. It’s interesting that you can find new markets like that for VR.

Rubin: In the long term, we totally believe that VR is much more than games. When we talk to consumers right now, the consumer most likely to be interested in VR is a gamer. In the long run, Facebook has every intention of making VR a computing platform for every type of thing. Also, I’m not sure that—rolling PCs into retirement homes, I don’t know if you even need that. Quest is all you need to take those people to the Colosseum, scuba diving, outer space, whatever it is you’re showing. 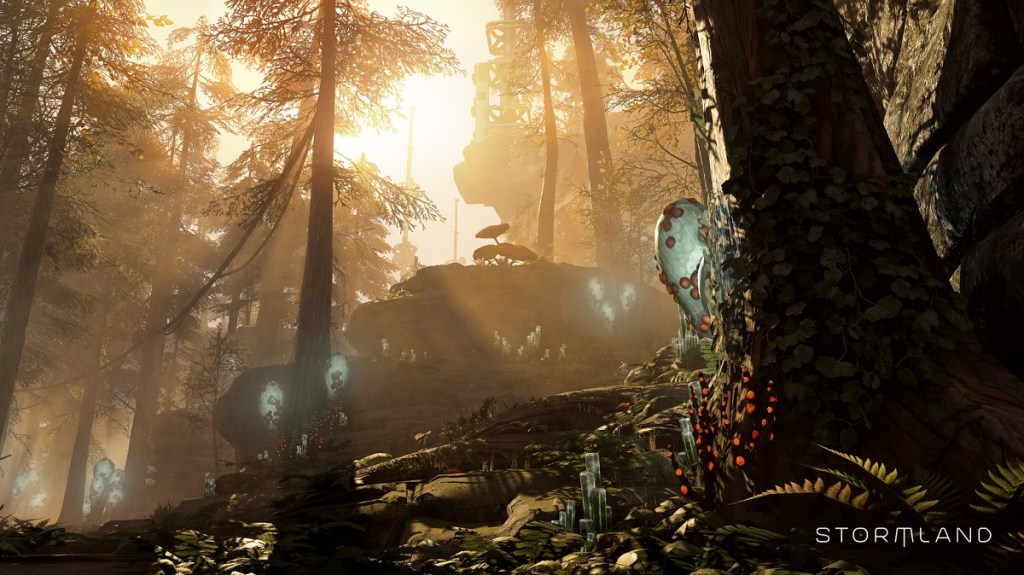 GamesBeat: It’s good to see that people still get excited about VR.

Rubin: I remember when phones still had dials. I remember seeing my first fax machine. For my parents, to go from black and white televisions rolling in houses to what I do, it’s insane when I show it to them. Whereas if I show it to my six-year-old, she just says, “Awesome, I love this, this is great. What else can I do?” Because to her, of course, why shouldn’t there be this stuff?

GamesBeat: My 15-year-old plays with it all day with her friends, on the Quest.