Over the holidays, I heard Donald Trump giving his stump speech in South Carolina on my car radio. It strikes me that, for all we hear about Trump’s outlandish statements in the press, there’s very little reported about his actual message.

Beneath all of his bluster and meandering, Trump is advocating a cogent economic platform targeting an increasingly disenfranchised middle class.

It is well understood in economic circles that a combination of globalization, technology, and government policy — trends that most members of the Republican and Democratic parties fully support — has stagnated wage growth in the middle class. Trump and Bernie Sanders are the lone presidential candidates questioning this status quo, which is why they’re both drawing so much interest. 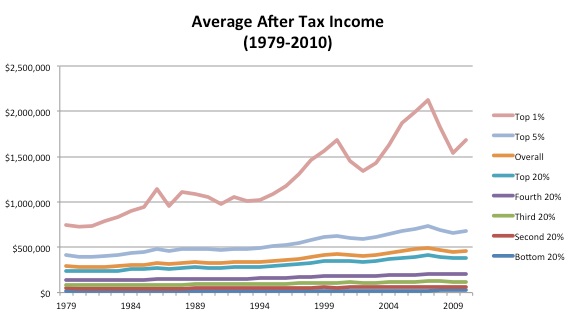 Trump’s policy proposals are ironically reminiscent of the Democratic Party’s pre-Clinton labor positions and are profoundly pro-domestic manufacturing and anti-tech.

Here’s a closer look at those proposals.

In his stump speeches and ads, Trump said he will definitely break tech-friendly trade deals. The United States participates in several free trade agreements, such as the North American Free Trade Agreement (NAFTA), the newly signed Trans-Pacific Partnership (TPP), and China’s inclusion in the WTO. These agreements are always a multilateral compromise, and the U.S. generally negotiates to increase the sale of high-margin intellectual property, technology, and services. In exchange, developing countries gain the ability to sell low-margin manufactured goods to the U.S. This is net-net a great trade for the U.S. from a corporate perspective, but it has definitely led to income disparity.

These agreements often come with “retraining funds” for affected U.S. workers such as the Trade Adjustment Assistance Enforcement Act (TAA) that do not seem to have an impact. The often-cited jobs in solar installation and natural gas simply do not offset the massive decline in manufacturing. And not everybody can go through Hack Reactor and become a web developer. There is definitely high demand for elite programmers, but beyond that, programming is one of the most globalized industries in the world.

The tech industry is increasingly pushing convenience for the rich consumer at the expense of the poor supplier. A return of manufacturing jobs is what a wide swath of the middle class wants rather than “sharing economy” gigs like driving for Uber. Whether or not a return of these jobs is possible is beside the point. The idea alone is resonating and offers hope, a powerful theme that the Obama campaign successfully used in 2008.

The press definitely picks up on Trump’s salacious statements about illegal immigrants, such as his assertion that illegal immigrants from Mexico are rapists or that we need to build a wall on the U.S.-Mexico border. However, this is really just rabble rousing considering more Mexicans are now leaving the U.S. than arriving.

Knowledgeable observers such a Fred Wilson think that Trump also wants to severely restrict immigration of skilled labor. U.S. technology companies love to import skilled labor with the H1-B and L1 visa programs, but many external observers have likened H1-Bs to indentured servitude.

The underlying economic theory is that limiting the available labor pool will raise U.S. wages. Though this may increase the price of goods, the ideas do resonate with the disenfranchised middle class.

A large swath of the American middle class is terrified of terrorism, and Trump is increasingly talking up strong action on security. The U.S. has backed off many of its mass surveillance programs since the Snowden revelations in 2013, and the White House recently backed off on forcing U.S. technology companies to add surveillance backdoors to their products. There is no question that Trump will weigh national security interests far above the sanctity of the U.S. tech industry.

A Challenge to the Tech-Friendly Status Quo

Both Democratic and Republican parties have been staunchly in favor of policies that support high-margin industries like the U.S. tech industry, which, together with other policies, has led to vast income disparity. Consider the fact that both of the major parties are in fact minority parties: Registered Democrats compose 30% of the population and registered Republicans are 26% of the population, with a full 43% identifying as independent.

Democrats support raising taxes on the wealthy in order to provide more government benefits to the masses. Republicans advocate fewer taxes and more business-friendly policies with the hope that money will trickle down to the middle class. The tech industry is intent on lowering the cost of production of everything from housing to transportation to medical care that soon enough they will all be effectively free.

Donald Trump seems to be the only voice calling for a rollback of free trade agreements, limits on immigration, and an increase security at all costs – three key themes that are the antithesis of the tech industry but that seem to be resonating with a significant portion of the disenfranchised middle class.