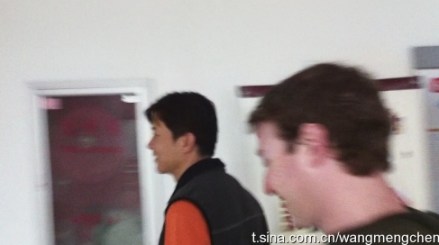 Facebook faces censorship in China, even as it expands to dominate the rest of the globe. But even if Zuckerberg tries to fix things in China, there’s little chance he’ll get anywhere soon.

Neither Facebook nor Baidu would comment on the reason for the Zuckerbeg visit, which hit the news after a Baidu employee Wang Mengchen took a picture (top left) during Zuckerberg’s lunch visit with Baidu founder Robin Li. But the speculation here in China is that Zuckerberg is scoping out what sort of compromise might be reached with Chinese authorities in order to gain some foothold there. Baidu’s Li has played the game carefully in China, and so is a good source of advice to Zuckerberg.

I happen to be visiting Taipei this week, and several developers here expressed frustration at Facebook’s absence in China. In both Taipei and China, developers would like to leverage Facebook’s potential popularity to build applications to reach the Chinese speaking world. True, many people in China access Facebook by using proxy server or VPN technology, and some developers are using similar workarounds to develop for Facebook (see, for example, FiveMinutes, Happy Elements, ELEX and XPD). But the official government blockade of Facebook is enough to dissuade many from betting their business on it.

The social networking site is arguably even more sensitive for Chinese authorities, given its potential use by activists as a tool for protest. So right now there’s little hope that things will change any time soon. Just imagine if Facebook were to enter China only to buckle later under Chinese government pressure. As it is, there’s a firestorm of protest whenever Facebook tinkers with its privacy settings or advertising policies. Add a Chinese presence to Facebook, and things would get nastier for the young company. Yahoo has been severely criticized in the past for handing over personal data to Chinese authorities. The trove of personal data that Facebook carries on individuals is huge.

Zuckerberg has previously talked about the need to do business in China: “How can you connect the whole world if you leave out 1.6 billion people?,” he reportedly asked in October. While Facebook now has more than 500 users worldwide, China has about 440 million Internet users online that are largely untouched by Facebook.

It’s not clear how urgent Facebook sees the game in China. If it does want to enter China, it has to move quickly, because no single Chinese social network has emerged as dominant. Theoretically, it can still avoid Google’s fate:  Chinese competitor Baidu now enjoys about 80 percent market share on a page view basis, according to some reports. Google has lost the war and wasn’t helped when it resisted censorship earlier this year. It was then slapped with a full ban by China. Aside from Facebook, Twitter is also banned.

Kaiser Kuo, Baidu’s director of international communications, said he could only give the party line about the visit: “[Mark Zuckerberg] is on vacation, his interest in China is no secret and is pretty well-attested, he’s been learning Mandarin for a while now, [his girlfriend Priscilla Chan] has family in China, Robin and Zuck have known each other for over a year and have met on several occasions, he came here and Robin gave him the tour of our campus, they had lunch, they chatted behind closed doors and they’re not saying what was discussed.”

Notably, Baidu has been building out its own social network. Called Baidu Talk, the beta product is sort of like a Twitter but more fleshed out so that users have a fuller profile page. The product uses people’s real identities. Users who sign up have their photos checked against their photos contained in China’s public security bureau’s database.

The two companies have some similarities. Both are increasingly growing quickly and acquiring companies to spur more growth. Facebook’s head of M&A Mike Brown recently said Facebook plans to make 15 acquisitions next year. And Baidu is now looking to acquire companies outside of China, we’re told, after making some unannounced purchases domestically, including an unspecified stake in a Chinese home furnishing portal.